Is there a proof from the first principle that the Lagrangian L = T - V?

Is there a proof from the first principle that for the Lagrangian $L$,

in classical mechanics? Assume that Cartesian coordinates are used. Among the combinations, $L = T - nV$, only $n=1$ works. Is there a fundamental reason for it?

On the other hand, the variational principle used in deriving the equations of motion, Euler-Lagrange equation, is general enough (can be used to to find the optimum of any parametrized integral) and does not specify the form of Lagrangian. I appreciate for anyone who gives the answer, and if possible, the primary source (who published the answer first in the literature).

Notes added on Sept 22:
- Both answers are correct as far as I can find. Both answerers were not sure about what I meant by the term I used: 'first principle'. I like to elaborate what I was thinking, not meant to be condescending or anything near to that. Please have a little understanding if the words I use are not well-thought of.
- We do science by collecting facts, forming empirical laws, building a theory which generalizes the laws, then we go back to the lab and find if the generalization part can stand up to the verification. Newton's laws are close to the end of empirical laws, meaning that they are easily verified in the lab. These laws are not limited to gravity, but are used mostly under the condition of gravity. When we generalize and express them in Lagrangian or Hamiltonian, they can be used where Newton's laws cannot, for example, on electromagnetism, or any other forces unknown to us. Lagrangian or Hamiltonian and the derived equations of motion are generalizations and more on the theory side, relatively speaking; at least those are a little more theoretical than Newton's laws. We still go to lab to verify these generalizations, but it's somewhat harder to do so, like we have to use Large Hadron Collider.
- But here is a new problem, as @Jerry Schirmer pointed out in his comment and I agreed. Lagrangian is great tool if we know its expression. If we don't, then we are at lost. Lagrangian is almost as useless as Newton's laws for a new mysterious force. It's almost as useless but not quite, because we can try and error. We have much better luck to try and error on Lagrangian than on equations of motion.
- Oh, variational principle is a 'first principle' in my mind and is used to derive Euler-Lagrange equation. But variational principle does not give a clue about the explicit expression of Lagrangian. This is the point I'm driving at. This is why I'm looking for help, say, in Physics SE. If someone knew the reason why n=1 in L=T-nV, then we could use this reasoning to find out about a mysterious force. It looks like that someone is in the future.

We assume that OP by the term first principle in this context means Newton's laws rather than the principle of stationary action$^1$. It is indeed possible to derive Lagrange equations from Newton's laws, cf. this Phys.SE answer.

It is then possible to derive the following key identity

Here $\delta$ denotes an infinitesimal virtual displacement consistent with the constraints. Moreover, ${\bf F}_i$ is the applied force (i.e. the total force minus the constraint forces) on the $i$'th particle. The Lagrangian $L:=T-U$ is here defined as the difference$^3$ between the kinetic and the potential energy. Note that the rhs. of eq. (1) precisely contains the Euler-Lagrange operator.

D'Alembert's principle says that the lhs. of eq. (1) is zero. Then Lagrange equations follows from the fact that the virtual displacement $\delta q^j$ in the generalized coordinates is un-constrained and arbitrary.

D'Alembert's principle in turn follows from Newton's laws using some assumptions about the form of the constraint forces. (E.g. we assume that there is no sliding friction.) See Ref. 1 and this Phys.SE post for further details.

$^1$ One should always keep in mind that, at the classical level (meaning $\hbar=0$), the Lagrangian $L$ is far from unique, in the sense that many different Lagrangians may yield the same eqs. of motion. E.g. it is always possible to add a total time derivative to the Lagrangian, or to scale the Lagrangian with a constant. See also this Phys.SE post.

$^3$ OP is pondering why the Lagrangian $L$ is not of the form $T-\alpha U$ for some constant $\alpha\neq 1$? In fact, the key identity (1) may be generalized as follows

Let me assume that "first principles" means Newton's laws but in the somewhat more encompassing formulation of Hamilton's equations, which say that given a Hamiltonian function $H$, then the canonical momentum (I'll display a single one, just for ease of notation) is related to the velocities by

At the same time, the change of canonical coordinates/canonical momenta is related to the Lagrangian $L$ by ("generating functions for canonical transformations")

Hence in general the Lagrangian is

By the way, anyone enjoying a more general abstract perspective on what's going on here might enjoy to learn this story translated to the language of "prequantized Lagrangian correspondences", for more on this see on the nLab here,

Lagrangian mechanics can be derived directly from Newton's second law using only algebraic manipulation and a some calculus. This includes both the general form of the Euler-Lagrange equation and the specific form Langangian $L = T - V$. No assumptions of stationarity, use of the calculus of variations, or even any reference to the concept of action are needed.

This is shown in Brian Lee Beers: Geometric Nature of Lagrange's Equations. Similar derivation is also in James Casey: Geometrical derivation of Lagrange’s equations for a system of particles. Casey also wrote a series of follow on papers extending the idea to rigid bodies, fluid dynamics, ...

The above derivation goes through for general systems, like multiparticle systems, rigid bodies, etc. The main change is that the mass scalar must be replaced by the inertia tensor of the system. This is covered in Caseys papers mentioned above as well as Synge: On the geometry of dynamics and Crouch: Geometric structures in systems theory.

I found a wikilink, Lagrange_multiplier, that answers my question:

"Thus, the force on a particle due to a scalar potential, $F=-\nabla V$, can be interpreted as a Lagrange multiplier determining the change in action (transfer of potential to kinetic energy) following a variation in the particle's constrained trajectory."

${\ \ }$In other words, the potential energy $V$ becomes a set of constraints for the Lagrangian $L=T-nV$ where $n$ is the Lagrange multiplier that needs to be determined. The variation

and the other $N$ equations are constraints. It turns out $n=1$.

The $n$ in $L=T-nV$ can be seen as a rescaling factor of potential. $n$ does not change the physics. For example for gravity, $n$ can be absorbed in gravitational constant. See also this.

Proof 1: I have one of my own which is less intensive: 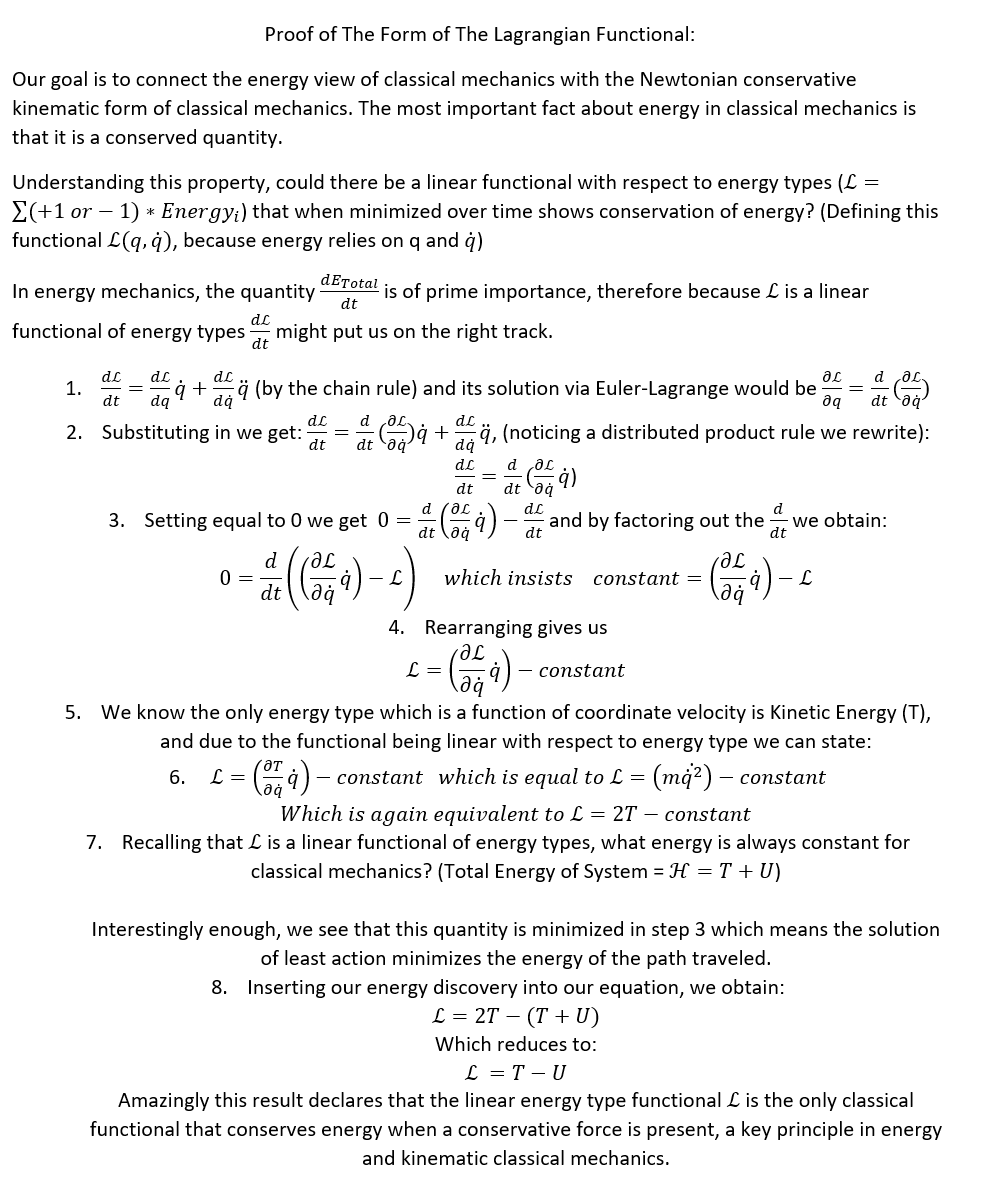 As a footnote to that proof: Because what we found as the total energy of the system is conserved, the equation in line 3 has new a new meaning: at every point along the real trajectory aka the solution of the Euler-Lagrange equation, the particle will move in the direction which keeps its total energy constant. In other words, the Lagrangian path is the path which minimizes the change of total energy from point to point (WHICH SHOULD BE ZERO).

Proof 2: (Functional Calculus) There is another proof in the textbook (Quantum Field Theory For The Gifted Amateur): Essentially if T and U are both functionals and their functional derivatives are taken:

Which when factored turns into: d/d(x(t))(T-U)=0 Which is the principle of least action: The stationary integral of the functional (T-U).

Not the answer you're looking for? Browse other questions tagged classical-mechanics lagrangian-formalism or ask your own question.

2
Must the Lagrangian always be known for the Euler-Lagrange equations to be of any use?
6
Proof that total derivative is the only function that can be added to Lagrangian without changing the EOM
3
Motivation for the Euler-Lagrange equations for fields
2
Counterexamples to the least action principle
2
Geodesics from variational principle with respect to coordinate?
2
Is there anything natural about the principle of "stationary action"?