What are good examples to demonstrate Einstein's mass-energy relation [duplicate]

According to Einstein's mass-energy relation mass and energy are interchangeable. Can you provide some examples where:

A slightly different perspective, showing a bit more insight into the mass-energy equivalence.

We ask what happens when we put energy inside a box.

Modern physics tends to think of everything - matter and energy as "stuff of the universe", the amount of "stuff" in a system is its total energy content, and "stuff" with a total energy $E$ always has the same mass $m$ given by $\frac{E}{c^2}$: mass is a particular property of "stuff" that defines (i) how it responds to force (i.e. its inertia) and (ii) how it affects and is affected by gravitational fields. These two masses are equal, by the Eötvös experiment and the equivalence principle of general relativity.

So, for instance, consider a photon, a normally "massless" particle (i.e. it has zero rest mass, which also means it is always moving at speed $c$). Now we trap it in a perfect, weighless resonant cavity. 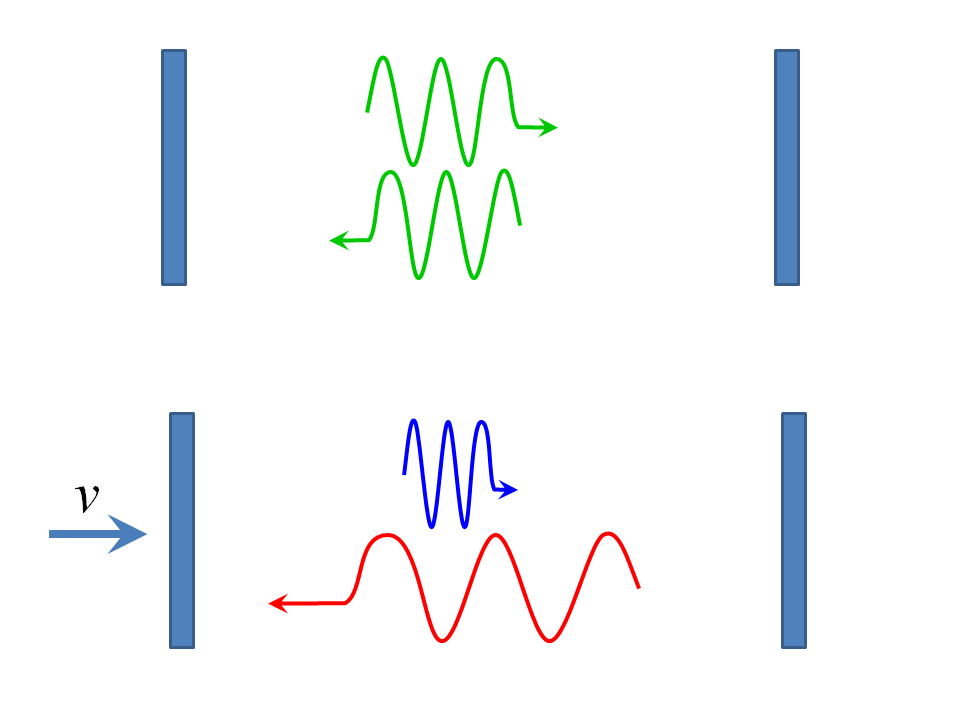 At first we are at rest with respect to the cavity and there is light trapped within(easiest to think of it as a standing wave photon, but the reasoning applies to a general waveform). Then, at $t=0$, we shove the cavity, instantly increasing its velocity from nought to $v$ metres per second rightwards, and then keep pushing at constant velocity. Of course, the light is blue shifted by the left hand mirror and red shifted by the right hand mirror. There is in general a complicated sequence of collisions, but what you find is this: the total impulse needed to achieve a steady velocity of $v$ is $E v / c^2$. In other words, the system has an inertia given by $E / c^2$.

You can do the analysis by (i) thinking of one photon in the box, calculating the Doppler shift at either end and then finding the difference between the red and blue photon momentums by the standard formula $h\,\nu/c$, or (ii) you can do the full classical calculation by applying the Lorentz transformation to the electromagnetic field tensor and working out how the left-to-right and right-to-left fields transform. In the second calculation, the system takes some time to reach steady state, but the total impulse required is still $E v / c^2$.

So, by confining the photon, you give it "rest mass" - the photon's energy manifests its inertia by being confined in a box.

Continuing along this line of thought.

Let's look at the difference between the electron (or other massive fermion) and the photon. The curl Maxwell equations in freespace can be written:

where $\sigma_j$ are the Pauli spin matrices and the electromagnetic field components are:

and represent the left and right-hand polarized light field whereas the Dirac equation for a massive Fermion can be written:

where now the $\Psi_\pm$ are $2\times1$ complex column vectors rather than $2\times2$ matrices (and also they are not quite the same as the so called spinors wontedly used to write the Dirac equation: they are sums and differences of the more usual spinors, but this need not worry us here). The main point of these fancy equations, even if you don't fully understand all their meaning is that they are exactly the same but for one thing: the Maxwell equations are two uncoupled equations for the left and right polarized light fields: the Dirac equations are the same, but now there is a mass term on the right that couples the otherwise uncoupled equations. One can think of an electron as two massless particles (Roger Penrose quaintly calls these "Zig" and "Zag") that are bound to one another such that the electron's state oscillates back and forth between the two (indeed I rather believe Penrose with his cute names might be playing on Schrödinger's word for this "jitteriness" of the electron: the Zitterbewegung).

This mutual coupling begets the mass of the twin-particle system. The coupling constant $m$ is like a tether between the two otherwise massless particles. The massless particles mutually partially confine one another, thus begetting the electron's inertia in exactly the same way as the confining resonator made the photon's inertia manifest.

Actually this idea is how we know neutrinos have mass - they oscillate between flavours and therefore the flavours must be coupled. Therefore, there must be a nonzero coupling term between them, therefore there is this tethering effect and so we know that the neutrino must have a very small rest mass, even if we can't yet say exactly what it is.

Mass to energy: The sun, which is mostly hydrogen fusing to make helium.

Not the answer you're looking for? Browse other questions tagged special-relativity nuclear-physics mass-energy or ask your own question.

25
How does rest mass become energy?
0
Einstein's energy equation
24
How can energy be useful when it is 'abstract'?
11
How to derive $E=mc^{2}$?
24
Is the Higgs boson not responsible for most mass?
20
Do all massless particles (e.g. photon, graviton, gluon) necessarily have the same speed $c$?
8
Can one create mass from energy?
4
How does matter transform into energy and vice versa?
3
Mass Defect...cause and origin?
2
Travel at the speed of light
See more linked questions

4
Einstein's mass-energy relation
25
How does rest mass become energy?
0
Relation between mass and energy
1
Where will the charge of a mass will go (having some net charge) when completely converted to energy?
15
Conversion of mass into energy with 100% efficiency