What are the strongest sources of collimated neutrons and protons?

I am imagining an unusual experiment which will require intense beams of either protons or neutrons. The experiment would work better with neutrons, but neutron sources are much weaker messier so I am considering both. I am interested in beams of almost any non-relativistic energy. I am not sure yet about how focused I will need the beam to be.

I know this is a beginner question, but what are the basic options here for the strongest source (as measured by neucleons per second)?

Neutron apparently come from two sources: reactors and accelerators. (As Sir Patrick Stewert can attest.) In the latter case ("spallation"), a proton beam is just slammed into a heavy-metal target and the neutrons that fly out are caught. It appears that the highest intensity protons beams are often used to produce the highest intensity neutron beams in this manner.

(These agree with Andre's chart below showing 100 mA. Note also that the LHC current is about 500 mA, although the protons are grouped into bunches. And as Andre pointed out, the LHC circulates the same protons and so could not provide a continuous 500 mA beam into a target/experiment that consumed them.)

Neutron sources, being the result of either fission or spallation, are messy. I still don't have a good handle on what kind of neutron intensities are possible for what momentum ranges. The Lujan Neutron Scattering Center at LANCE is a neutron source for many experiments.

In spallation, the number of neutrons produced per incident proton is usually on the order of 40, but the phase space distribution is much wider than the incident protons. (Protons beams can be directly focused using magnets.) According to a CERN report by Lengeler, reactors typically can produce thermal neutrons (~0.025 eV) fluxes of order $10^{14}$ neutrons/cm${}^2$s, whereas spallation sources can exceed $10^{17}$/cm${}^2$s.

It is probably best, then, to think of continuous neutron sources as phase-space-density limited, with the above numbers giving a rough estimate of the currently achievable densities.

Apparently, spallation sources are limited by the need to dissipate the heat from the incident proton beam. If high fluxes are needed only briefly, laser pulses can produce $4 \times 10^{9}$/cm${}^2$ over a nanosecond, i.e. an instantaneous flux of $4 \times 10^{18}$/cm${}^2$s.

As for protons, it's worth noting that the high-intensity 50 mA beam at the European Spallation Source is limited by "space charge effects at low energy, by the power that can be delivered to the beam in each cavity at medium and high energies, and by beam losses."

arxiv:1305.6917 has a nice graph comparing different proton accelerators with respect to beam intensity (in milliampere, $6.241\cdot10^{15}$ protons per second) vs. beam energy (I assume you mean man-made particle sources...): 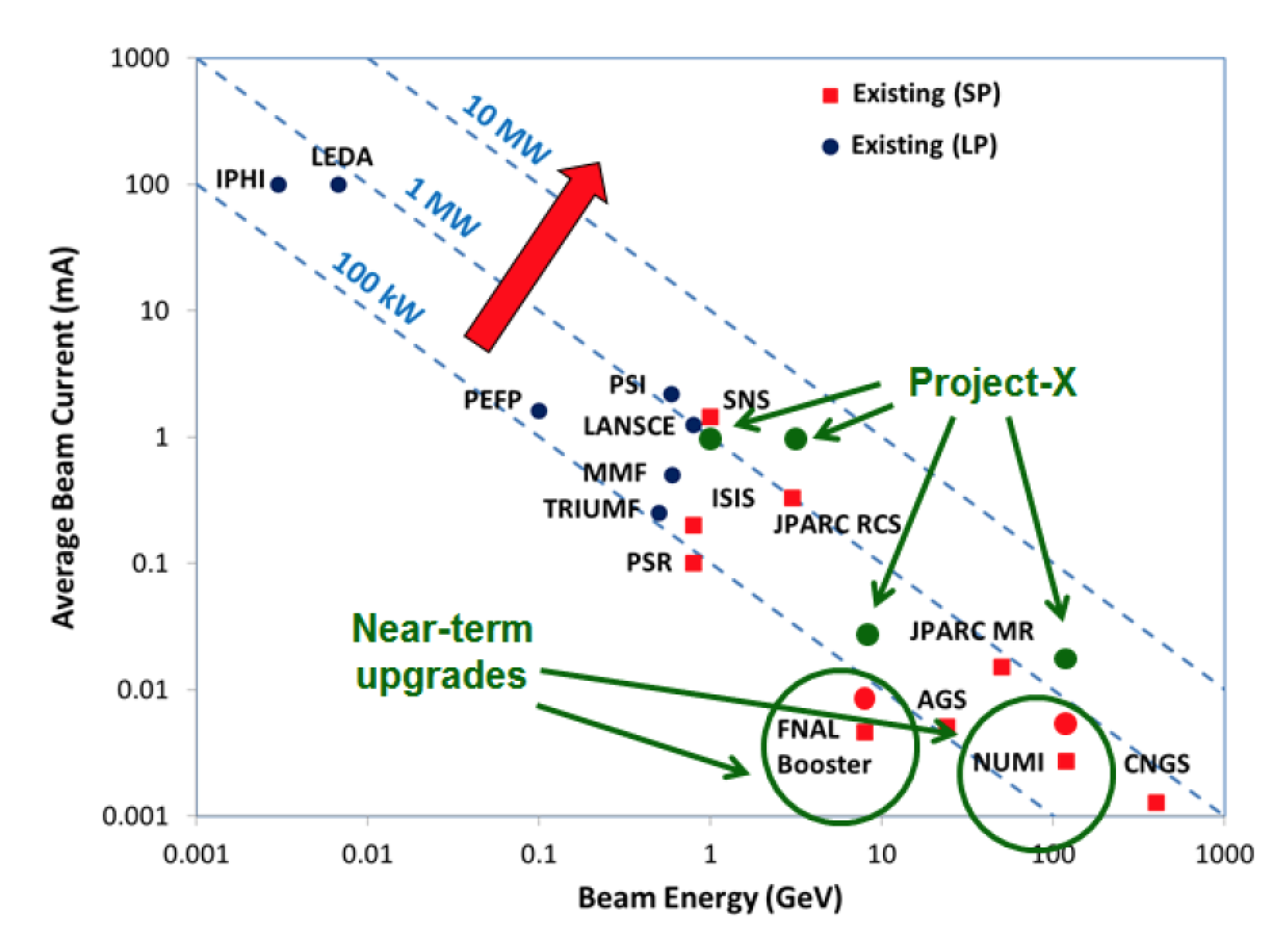 The 590 MeV (kinetic energy), 2.2 mA proton beam at PSI is operational, I'm not sure about the higher intensity (but lower energy) LEDA and IPHI beams. Also, the graph does not contain the proposed proton source for DAEδALUS.

Some of these proton beams are also used (e.g. the PSI beam) to produce neutrons (for example using a spallation target). Since neutrons are neutral, there aren't any neutron accelerators.

Not the answer you're looking for? Browse other questions tagged particle-physics protons neutrons accelerator-physics or ask your own question.