How is a Lichtenberg figure created?

Related: Breakdown voltage of a dielectric

When I think of the dielectric breakdown of air, an electric field of $3×10^6$ V/m is enough to accelerate initially ionized electrons created primarily from muons via cosmic radiation. These ionized electrons then collide with neutral air molecules, which in turn generate an avalanche of charge that produces lightning. Using Wikipedia’s language, lightning is a three-dimensional Lichtenberg figure.

Reading Wikipedia’s section on Modern 3D Lichtenberg figures, a piece of acrylic (or glass) is impregnated with electrons from a linear accelerator. When this acrylic is made to discharge, a “beam tree” is formed that is absolutely beautiful. 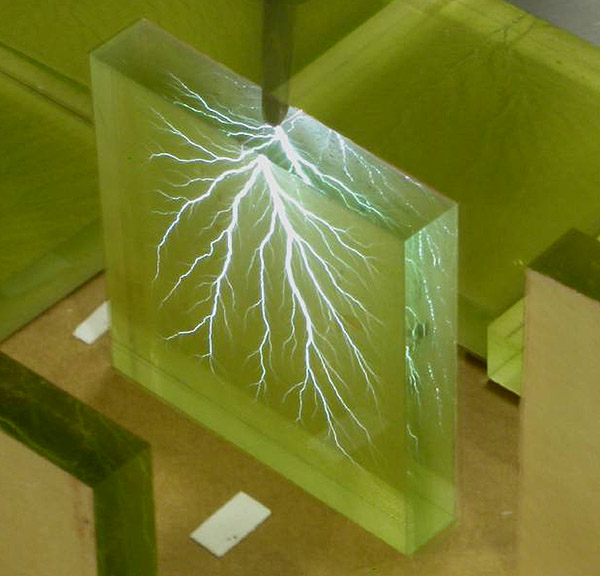 What is the role of the pointed conductive object (or nail) that initiates the dielectric breakdown of the acrylic? The electrons trapped inside the acrylic create a charged dielectric and create some potential. I assume that the nail grounds out this acrylic so that electrons burn a path towards the nail to form the beam tree. However, I want to know what is happening at the atomic level?

From plasma physics perspective, those branches are called streamers. What happens here is that the pointed conductive object creates a high electric field because of it is pointy geometry. Of course it is connected to external power supply so it is biased at a certain voltage. The high electric field at the edge of the nail causes the loosely confined electrons in glass slab to get energized to a level where they can escape from their confining atoms and

a.Either release another electron from an atom when they collide with it (ionization process)

b.Or excite an electron in the atom when they collide with it, making the excited electron easy to ionize by another energetic electron.

Since free electrons can carry current, those free electrons practically create some conducting channels within the dielectric. The conducting channels represent the easiest (the least resistant path) of electrons to move from the electrode (nail) to the ground. Determining the path of those channels is difficult because it depends on a lot of factors such as the intensity of ionization reaction in the dielectric, the energizing rate of electrons (to prevent them from recombination) and so.

It is similar to lightning during storms. The dielectric in the case you presented is glass while in lightening it is air. The channels are the paths in air where lightning strikes the ground. The only difference is that if you wanted to generate streamers in the lab you need to ensure you have a strong enough electric field to initiate the process. And that is what you do when you use a pointed conductive object.

Generating streamers and their characteristics highly depend on the material used. For example the required voltage to initiate this process in glass is different than air.

Breakdown processes within solids are considerably more complex than those in gases. The properties of PMMA that has been injected by electrons via a particle accelerator have been studied by a number of researchers. If a PMMA specimen is bombarded by electrons that do not have sufficient energy to fully penetrate it, a layer of internal negative space charge is developed within. The depth of the layer depends on the electron beam's initial energy. During injection, a layer of positive image charges also develops on the exterior surfaces of the acrylic. Positive ions (created by the collision of the high-energy electrons with air molecules) are strongly attracted by the growing internal negative space charge layer and these ions attach themselves to the PMMA. They form a matching layer of positive space charge on all the external surfaces of the PMMA. The fields from the inner and outer space charge layers virtually cancel, leaving only a slight net external electrical field around the PMMA specimen. You can think of the specimen as being a "plateless" capacitor with opposite charges residing on the surfaces and deep inside the dielectric. When fully charged, the static electrical field between the inside space charge layer and the outer surfaces can reach 1-2 MV/cm across the intervening acrylic.

If we then penetrate the surface of a charged specimen using a sharp metal point, the E-field in the PMMA at the tip is significantly enhanced. Once the local E-field exceeds the impulse breakdown strength of the acrylic (typically 5-6 MV/cm), avalanche breakdown begins, and the excess charges in the negative space charge layer begin flowing through the newly-created streamer channels that originate from the metal point. Since the discharges actually originate from a more positive point and propagate into a more negative region, the resulting Lichtenberg figure is a highly-branched positive Lichtenberg figure. The metal point can be grounded (for safety reasons when discharging large specimens) or left floating for small specimens. In either case dielectric breakdown will occur with no external voltage source being necessary, since we have well over a million volts of potential available between the internal charge layer and external surfaces of the specimen itself.

The actual breakdown mechanisms occur extremely quickly. Members of our group have measured discharge propagation through PMMA at between 8.5e5 to 1.3e6 m/s using both electrical and optical techniques. Through field enhancement, the E-field at streamer tips may exceed 20 MV/cm - sufficient to cause dielectric breakdown and conduction through a variety of avalanche and field emission mechanisms. Energy to drive streamers further into virgin material is provided by the stored electrostatic energy residing within the space charge of undischarged material ahead of advancing streamers, and the process continues, almost explosively, until (most of) the space charge energy has been depleted. This energy can be quite significant. For example, the electrostatic energy associated with the space charge within a fully-charged one foot square by one inch thick piece of acrylic can be almost 1 kJ!

An excellent discussion of the breakdown mechanisms of solids going down to the molecular level can be found in the following PhD thesis (and many other subsequent papers) by P. P. Budenstein: Effects of excess charge density on dielectric breakdown in solids" at http://www.dtic.mil/cgi-bin/GetTRDoc?AD=ADA048267

A layman's description about how we create 3D acrylic Lichtenberg Figures and some theories regarding their formation can also be found on our web site at: http://www.capturedlightning.com/frames/lichtenbergs.html

Not the answer you're looking for? Browse other questions tagged electricity dielectric or ask your own question.

2
Breakdown voltage of a dielectric

5
How can I find the potential created by spherical capacitor with dielectric material?
1
Can energy be extracted from clouds?
0
How do I electrostatically charge a plate?
0
How does a dielectric form in an electrolytic capacitor?
2
Is electromagnetism created by charged particles?