How do people work out the trajectories of planets and stars just by looking at them?

I've been thinking about how astronomers can look at bright dots in the sky and deduce a whole bunch of things from their movements. I'm particularly interested in how people like Kepler and Galileo, 400 years ago, were able to deduce that planets move in ellipses and work out laws like equal times means equal areas, among others. It seems really remarkable to me that people have figured out a lot of very detailed things about the universe just looking from our planet.

There is a similar question that asks how people can determine what the different celestial objects are made of. I'm more interested in the mechanics side of it; in class we've worked out Kepler's laws theoretically using Newtonian mechanics, but of course that's not how Kepler did it. I'd be interested in a more-or-less detailed explanation of how can one deduce so much about celestial objects just by looking at the sky. I realize this is probably not trivial, so references to books or websites are fine.

I'm particularly interested in how people like Kepler and Galileo, 400 years ago, were able to deduce that planets move in ellipses and work out laws like equal times means equal areas, among others.

Actually, Galileo didn't do work in quantitive description of orbits of celestial bodies. So it narrows down to Kepler.

Astronomical observations of position are inherently incomplete. The observations record angular position accurately, but distance can only be estimated.

For comparison: there is the classroom demonstration of letting a tethered object move around on an air table, to observe centripetal acceleration and angular momentum and so on. You take pictures at short time intervals and then you record the position of the puck at each consecutive time interval. Imagine you are given only the angular positions of the puck, but not the distance values. Well, without the distance information you don't have enough to go on.

That is the problem that Kepler took upon himself to solve. The way he achieved that is absolutely fascinating.

Kepler's efforts, including the many blind alleys he took, are recorded in his book 'New Astronomy'. I have come across an impressive resource for Kepler's New Astronomy.

Key passages are explained, and many of Kepler's diagrams are recreated as flash animations.
(The work has been done by a team that is part of the 'Larouche Youth Movement'. As far as I can tell this Lyndon Larouche isn't a scientist, so it's not clear where the interest in Kepler comes from, but whatever the motivation the team members have done a cracking job.)

The greek astronomers (culminating in the work of Ptolemy) used uniform circular motion as building blocks to contruct models for celestial motion. (Copernicus moved from geocentrism to Heliocentrism, but he continued the approach of using circles and epi-circles.)

At some point Kepler decided he had to move away from the motion along circles as basic building blocks. That meant that the only way for him to work on the problem was to try and guess.

To calculate orbit points you need:
- a rule for the shape of the orbit
- a rule for the velocity at each point in time.
Let's say you get the guess for the shape of the orbit right, but you've guessed wrong for the velocity change rule. Then the points that you calculate don't match the observations, and you don't know which of the two guesses was wrong (or both guesses may be wrong, of course.)

Before trying ellipse-shaped orbits (with the Sun at one focus) Kepler tried various egg-shaped orbits. His first guess for the variable velocity was to make the velocity inversely proportional to the distance to the Sun. Right now I don't quite remember how Kepler came to try an area law.

Kepler started with the planet Mars. In retrospect we know that the orbit of Mars is the only one with a large enough eccentricity for Kepler's first two laws to be discovered at all.

Earlier I claimed that in trying to figure out the orbits of the planets the observations don't give the distances, but I realized that is not quite true.

Kepler was aware he could assume that the orbits of the planets repeat themselves; they are cyclic. He had decades of observations to work with, spanning many orbital revolutions of Mars.

To work on the orbit of Mars Kepler converted the anguler positions relative to the Earth to positions relative to the Sun. I assume Kepler was able to infer the actual period of Mars' orbit from the observations, to a good accuracy. So he was able to take two observations of Mars exactly one Mars year apart, so that Mars was in the same position on both occasions (but Earth not in the same position), and then compare.

Comparisons like that gave Kepler enough data to know the shape of Mars' orbit roughly. In retrospect we can see that an ellipse-shaped orbit (with the Sun at one focus) is a strong candidate. Kepler was bound to try it sooner or later. As mentioned earlier, Kepler started trying various egg-shaped orbits.

Likewise, it was clear that Mars moves slower when far away from the Sun, and faster when close to the Sun.

Kepler had theories about how the Sun was guiding the planets in their orbits. For instance, he envisioned a role for magnetism. None of those theories had lasting value on its own merits, but they did prompt Kepler to include in his attempts a velocity change rule where equal areas are swept out in equal intervals of time.

For starters, they observed astronomical events for many years. Once you make observations over the time-scale of the orbital period of different planets (w.r.t earth, to be more precise), you can note that those are periodic and repeat, to a very high accuracy. In fact, this was very well known to people over a thousand years ago (and very important for astrology!). They did not have powerful enough math/engineering to describe this fact and to "measure" how precisely periodic. But there are many intelligent tricks you can use, like comparing the position of a planet to a fixed background of stars, etc. Nice historical summary here -- https://en.wikipedia.org/wiki/Heliocentrism

As the Wiki page notes, people had been clutching straws and slowly grasping the idea over a millenium, and that culminated in the achievements of Kepler, Netwon etc that heralded the "modern" era (since we usually don't hear about earlier developments :-).

Once you have good observational data, it's just about extrapolating (and maybe interpolating, in some cases) with reasonable accuracy... which, for the most part needs good arithmetic ability. So as arithmetic developed over ~x00 A.D. and spread to Europe, the ability to calculate and measure improved. As your mathematician friends come up with nice "functions" (which are nothing but rules for operating on numbers), you can check to see if the positions you've been measuring match some of these functions. And so they discovered that the ellipses wonderfully matched data for planetary orbits.

Once you have an ellipse with the sun at a focus, and an estimate of the eccentricity, you can try to understand how the speed of the planet must change as it moves along the orbit. The distance from the focus to the planet will be the semi-major axis scaled by $(1 \pm \epsilon)$ at perihelion/aphelion. So you can compare ratios and try to get an idea. If you can do more sophisticated arithmetic and some algebra (which I'm guessing Kepler and Co. could), you can try to verify this for more generic positions on the orbital cycle.

In general in the early days, careful observation led to a growing understanding of celestial mechanics. The planets themselves went through strange motions like retro-grade motion where they appeared to sometimes stop and loop backwards in the sky and also there are times where the sun's motion and other planet's motion was not uniform. This eventually led to the discovery that they really move in elliptical orbits. And brought about Keplers laws in the 1600's based on Tycho Brahe's observational data.

This has been a very long difficult process for us puny humans to tackle, especially when it came to the stars because they don't move much and we don't know how far they are. Measuring their distance was the first big task.

One of the biggest keys is a propriety known as parallax. Tycho Brahe in 1570's used this to notice that stars were much further away beyond the moon. After hundreds of years of mapping the skies it became apparent that there was a gradual motion in different directions.

You can simulate the parallax effect by looking at something near you and alternate closing one eye. You will notice the background shifts with each eye.

Obviously the further apart your two observations are the more an angle of shift you can measure. As our telescopes and celestial mechanics improved we were able to make more refined observations. Now we are able to use the width of the entire Earth's orbit to make parallax measurements.

This measurement is good to about 1,500 ly. Shown here is one of mankinds finest telescope systems the Very Long Baseline Array making some distance measurements. 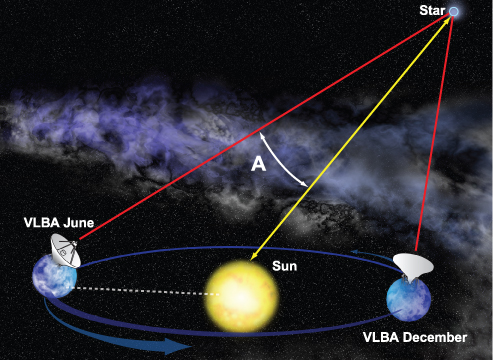 Beyond 1,500 ly we rely on brightness. Luckily, there are several kinds of objects in the universe whose luminosity we think we know. One such object is a Cepheid variable star. We use the brightness of these stars to determine their distances and the distances to clusters of stars that contain them, such as globular clusters in our own Milky Way galaxy or even the distances to other nearby galaxies where we can see individual Cepheid variable stars.

The Europeans are also building a new telescope the E-ELT which will have a very high resolution and might allow for more accurate measurements in the future. But this is something we have struggled with for a long time.

Not the answer you're looking for? Browse other questions tagged astronomy history or ask your own question.

6
How do we determine what distant planets, stars etc are made of?

15
How are newly discovered objects (stars, planets, galaxies...) named?
7
When and how were relative distances to the planets first measured?
3
How did Copernicus establish the relative distance to the superior planets?
4
How many stars did people think there were in the 11th century (or thereabouts)?
16
Victorian cosmology after the second law of thermodynamics but before relativity?
0
Why can't we detect the Earth's orbital motion when looking at the sky and stars?
7
How are Raw Observations Processed to Obtain Pure CMB Data?
2
The physics of Harrison's marine chronometers
1
How do scientists tell us the mass and size of planets and stars $20\,{\rm ly}$ or more away?