How much does the Earth's rotation affect a golf ball?

When launching rockets into space, they start straight but begin to lean, I assume due to the Earth's rotation.

For something on a much smaller scale, such as a golf tee, is there a measurable trajectory alteration, or is it something so incredibly minuscule that there's virtually no effect?

The answer: the ball appears to be deflected ~10 cm.

The calculation: For simplicity, say we tee off at the north pole. The effects are a bit weaker at more typical locations, you multiply by sin(latitude) = 0.64 for a 40 degree (central california or washington DC) latitude.

The Coriolis effect exists because the Earth rotates while the ball is in flight (we ignore air friction). We can picture the hole attached to the edge of a circle which rotates horizontally while our ball is in flight. This will mean that the hole is deflected sideways by the time the ball gets there. However, since we are also rotating, we think that the ball was deflected.

This is enough to make you miss your hole in one, but I don't think even the pro golfers can achieve a 10cm accuracy on a 200m swing. For putting, the deflection is much less since distance is far smaller. So don't worry about aiming 10cm clockwise the next time your going for that hole in one.

Edit: Our calculation does not include the initial Eastward velocity due to the motion of the golfer. This doubles the effect (at least on the poles), but air and/or ground friction will reduce the the effect and it's not unreasonable to guess that they approximately cancel.

An alternate derivation for a due-north ball, ignoring the diminishing effect of latitude, that confirms Kevin's order of magnitude:

Horizontal displacement $d$ is given by

Rockets lean as they climb on purpose, in order to obtain the high orbital velocities needed to stay in space once they get there. For a nice explanation, see Orbital Speed at xkcd what-if, but the gist is the following. Being in orbit means going so fast that the Earth begins to curve away from you as you fall down towards it. The classic image to keep in mind is 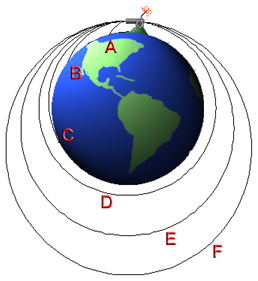 Source: Astronomy Education at the University of Nebraska-Lincoln

To actually orbit, you need to be going fast enough for this to happen. Rockets lean sideways to get such an acceleration; that's the 'cannon' if you will.

While there is an appreciable effect on the rocket's motion (or its apparent motion from Earth's surface) due to the Earth's rotation as it climbs into orbit, this is more than compensated by the intentional manoeuvering.

And, of course, the effect on a golf ball is negligible.

Golf swing
As has been pointed out in other answers: at best golfers can put a 200m swing in something like a 10m circle. So there will never be a measurable deviation; the aim of a golf swing is limited in accuracy.

Crossbows
However, it may well be that high power crossbows can show the effect. A crossbow that is designed to repeat very well can be dialed to a high accuracy. At the same time the bolt is under way long enough for the effect to build up.

The procedure of dialing in incorporates all effects that influence where the projectile ends up. For firing north-south the deviation due to the Earth rotation is the same either way, so when a crossbow is dialed in firing south-to-north then firing north-to-south the aim will still be just as good.

The amount of drop is part of wat gets incorporated in the correction when a rifle scope is dialed in. So I expect a (high power) crossbow that has been dialed in in one direction (along east-west) will miss the target by a predictable margin when shooting in the opposite direction.

Not the answer you're looking for? Browse other questions tagged newtonian-gravity earth projectile coriolis-effect or ask your own question.