Why do some things crystallize? (And others don't, for that matter.)

Ice, for example, will form a crystal when frozen under certain circumstances. Why is this the case for ice? While on the subject of water crystallization, why do snowflakes usually form in base 6 formations? Would other materials act similarly? I also noticed this sort of square spiral crystal made of bismuth. Can anybody explain how that forms, very specifically?

Please give the most fundamental and advanced answers possible. Thank you. 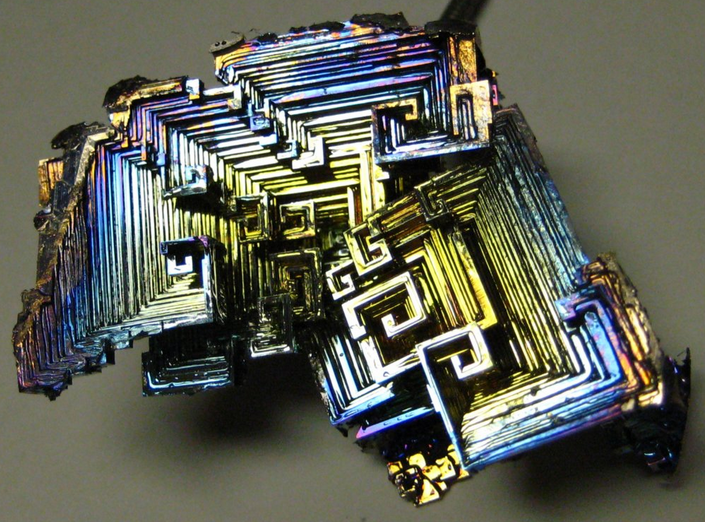 The crystalline state is almost always the lowest energy configuration for any solid) I say almost to cover my back, but I can't think of a single solid where this isn't the case) so in any liquid to solid transition the solid will form a crystal if it can.

Liquids have no long range order, so as the material freezes its component particles (atoms, ions, molecules, etc) have to be able to rearrange themselve into the configurations required for the crystal structure. This doesn't happen instantly but instead takes a time related to the speed of diffusion of the component particles in the melt. As a general rule, if the freezing is slow compared to the diffusion timescale then a crystal will form, while the the freezing is fast compared to the diffusion timescale an amorphous solid will form.

If you take a metal like bismuth then the melt contains single bismuth atoms that diffuse fast. This means bismuth (and most metals) form crystals on freezing. It's possible to make amorphous metals, but it requires extremely fast cooling of the melt. Even then, the last time I looked (this isn't my area) the amorphous metals were actually crystalline but with a very small grain size.

On the other hand, if you take a polymer like dimethicone then the molecules are huge and diffuse only very slowly. This means it is effectively impossible to form a dimethicone crystal by freezing the melt.

The best known amorphous solid is glass, and since this is composed of SiO$_2$ molecules you might wonder why it forms an amorphous solid on freezing. The answer is that in the melt the silicon dioxide molecules link up to form long chains, so it is effectively a polymer like dimethicone. Actually it is possible to form crystals of glass on freezing, but you have to maintain the melt at the freezing point for an extended time.

Finally, you mention freezing of water. Water contains H$_2$O molecules that are small and diffuse fast, so you would expect it to form a crystalline solid, which in most cases it does. However fast cooling can create amorphous ice.

I can try and answer your very first question. Water forms ice because the water molecule experiences an electric dipole (the water molecule is polar). This polarity is a result of the bond angle between the oxygen atom and each hydrogen atom, and the fact that oxygen has a stronger attraction to the negatively charged electrons. This permanent dipole moment gives the molecule regions of positive charge and regions of negative charge. When water reaches its freezing point, the molecules have less vibrational energy and move much less with respect to one another. The water molecules freeze and each molecule occupies a single and unmoving spot in a lattice. Because of the polarity, the water molecules arrange themselves in a lattice similar to that of a solid ionic compound, like salt.

Good explanation of water polarity (and a good site in general for HS or college physics and chemistry) -- http://hyperphysics.phy-astr.gsu.edu/hbase/electric/diph2o.html

Here is a cartoon image from learnbiochemistry.wordpress.com depicting the crystal lattice formed by solid phase water. The oxygens (negative) are oriented toward the hydrogens (positive).

Not the answer you're looking for? Browse other questions tagged solid-state-physics water physical-chemistry crystals or ask your own question.

3
Can you explain why crystals form without thermodynamics?
1
Why does molten sand cool to form glass and not return to it's original yellow form?

9
Why are some materials diamagnetic, others paramagnetic, and others ferromagnetic?
8
Why does ice melt, wait for 100 degrees and THEN vaporise? Why is not the process of expansion of things continuous?
16
Why do crystals grow in preferred directions?
1
Why are some colours of rainbow lighter than others?
8
Why don't eyes fog up?
24
Why don't marbles naturally arrange themselves like a crystal?
0
Why higher thermal expansion coefficient for ionic solids than non-ionic?