Why there's a whirl when you drain the bathtub?

At first I thought it's because of Coriolis, but then someone told me that at the bathtub scale that's not the predominant force in this phenomenon.

The whirl is due to the net angular momentum the water has before it starts draining, which is pretty much random.

If the circulation were due to Coriolis forces, the water would always drain in the same direction, but I did the experiment with my sink just now and observed the water to spin different directions on different trials.

The Coriolis force could also create some "spinning" if different parts of the water are moving different speeds. If the tub is draining to the north in the northern hemisphere, and water near the drain is moving faster than water far away, then the water near the drain would be pushed east more than water far away is. If you subtracted out the average effect of the Coriolis force, what remained would be an easterly push near the drain and a westerly push far away. This gives a clockwise spin as viewed from above.

We've already estimated the typical velocities as $\omega L$, so the angular momentum per unit mass induced this way would be on the order of $\omega L^2$ (but maybe smaller by a factor of 10). That's only $10^{-4}\ m^2/s$. To get an equivalent effect, in a tub of $100\ L$, you could give just one liter of water on the edge of the pool a velocity of a few cm/s, something you surely do many time over when removing your body from the tub.

This effect is too small to affect your bathtub, but it's still observable under the right conditions. According to Wikipedia, Otto Tumlirz conducted several experiments in the early 20th century that demonstrated the effects of the Coriolis forces on a draining tub of water. The tub was allowed to settle for 24 hours in a controlled environment before the experiment began. This was enough to damp out the residual angular momentum left over from filling the tub up to the point where Coriolis effects were dominant.

Since you want to explain it to your daughter, take a plastic bottle, cut the bottom open, turn it upside town, hold the top closed and fill it with water. Give her that bottle and have her release the top (which is on the bottom now, sorry for the bad phrasing). The water will whirl in different orientations whenever you repeat this (if it whirls at all) and she can influence it by accelerating the bottle in a circular motion to understand that an initial disturbance is responsible for the whirl orientation.

Angular momentum of the flow gets modified a lot as the tube twists and twists, sometimes even siphoning up and down.

[Moved this answer from here.]

Consider this picture of water running from a faucet: 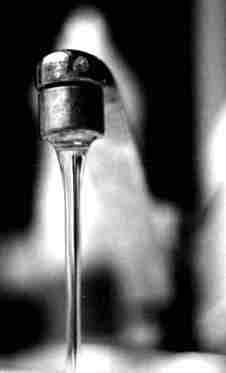 A draining bathtub is somewhat different because the water flows out at a rate that is approximately determined by the diameter of the drain, and there is also an open surface at the top, which can develop a conical indentation when there's rotation.

The open surface complicates things, so let's start by considering the case where there is no open surface. Then I think the same considerations apply, at least qualitatively, as in the case of the stream of water from the faucet. The bathtub doesn't have a shape that constricts strongly at the bottom. It has a nearly constant horizontal cross-sectional area. Presumably there is some very special shape for a bathtub that would allow the water to flow freely downward while satisfying constraints 1-3. For any other shape, the water has to violate #3 by rotating rapidly. This would suggest that the vortex forms spontaneously in all cases, and that it has a fixed speed of rotation regardless of the initial conditions. Feynman claims (Feynman 1964, section 40-4) that the flow is irrotational (in the sense that $\nabla\times\mathbf{v}=0$), so the speed of the rotation is proportional to $1/r$ (the same as the magnetic field around a wire). A possible loophole in all this is that according to the experiments and calculations in Andersen 2003, there is a layer of water near the drain hole that goes up and then comes back down. This allows us to have more kinetic energy for a fixed rate of flow.

In the case where there's an open surface, this gets even more complicated. Here we get an indentation, whose shape is shown by Feynman to be $z\propto 1/r^2$. The depth of this indentation is a variable that classifies different solutions. These different solutions have different rates of rotation, as predicted by Andersen. I don't know whether there is a solution for zero rotation. As discussed in the answers to another question, sufficiently careful experiments are able to see the tiny Coriolis effect, which suggests that there is a zero-rotation solution, but it's unstable.

In this experiment, they used two holes and found that only one whirlpool formed. This would seem consistent with my analysis in terms of conservation laws, since conservation laws are additive; only the total has to be conserved.

Andersen 2003 gives a complete mathematical analysis and comparison with experiment in the case where a cylindrical container with a hole at the bottom is intentionally rotated.

The main effect is angular momentum (rotational inertia) in the water set up by various movements before you start observing, such as getting out of your bath.

This results in the water level being lower near the centre of rotation than further away, setting up centripital forces which maintain the rotation. When the difference in levels is significant relative to the average water level, you notice the typical whirl effect.

There are other things happening too, including the Coriolis force.

You can think about it like this: It takes one day for the earth to perform a full rotation (about 86k seconds), on the other hand, it takes a few seconds for your sink to drain (lets say 10 seconds). So it takes 8600 times longer for the earth to do a full rotation than it takes the water to drain down the sink. It is not too hard to imagine that the earth's rotation can have no influence on the process of draining a sink.

However, if the sink was the size of lake Michigan and you were to drain it, Coriolis would play a role.

references experimental work carried out but Ascher Schapiro in 1962, which concluded something like it all depends on the shape of container and how its stirred before being left to empty.

Here is Schapiro's paper but I feel you will need academic access via a university or library to read the full PDF:

The Coriolis effect works for big things like cyclones, but for a bathtub, the slightest asymmetry of the tub, air movement on top, convection current from uneven temperature etc. would have a far greater effect. Once there is the slightest sideways movement of the water any where around the hole, it will deflect the incoming water as in the diagram. That will cause the incoming water to push the water around causing it to rotate. This will deflect the incoming water more, increasing the rotation, & so on. It's like standing on a wheel. If you are right in the middle, where your weight is straight down towards the shaft, it will not rotate. But move slightly to the side, & it will start to turn, moving your feet to the side, which will make it accelerate more, moving your feet more to the side & so on.

Black natives demostrate the effect to white tourists in the video clip Water flow at the equator, Coriolis effect.

The above is nonsense, but I'll leave it on to prevent others doing the same. Videos like the above fake the effect by pouring in the water close to the edge to give the required initial momentum.

Not the answer you're looking for? Browse other questions tagged fluid-dynamics vortex coriolis-effect faq or ask your own question.

2
Flushing water-Is it related to Coriolis force?
1
What causes a whirlpool to form in a bathtub?
21
How to show that the Coriolis effect is irrelevant for the whirl/vortex in the sink/bathtub?
10
Why does bathwater make a vortex in the plughole?
8
Why water in the sink follow a curved path?
8
water flow in a sink
0
Hurricanes and bathtubs