How does entanglement work independent of time?

A recent experiment shows that it is possible to entangle two particles that never co-existed in time. 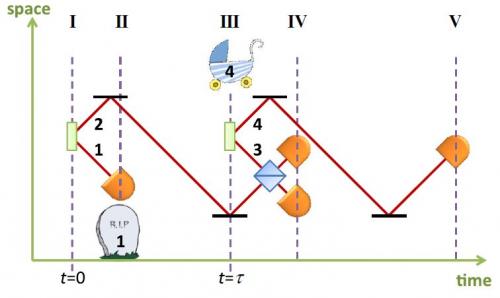 To prove it, the researchers first used a laser to cause entanglement between a pair of photons, P1, P2. They then measured the polarization of P1, which was immediately followed by the entangling of another pair of photons, P3, P4. This was followed by measuring P2 and P3 simultaneously and causing them to become entangled with one another—a process known as projective measurement. Then, P4 was measured. Measuring P1 caused its demise of course—before P4 was born—but the measurement of P4 showed that it had become entangled with P1 nevertheless, if only for a very short period of time.

The researchers suggest that the outcome of their experiment shows that entanglement is not a truly physical property, at least not in a tangible sense. To say that two photons are entangled, they write, doesn't mean they have to exist at the same time. It shows that quantum events don't always have a parallel in the observable world.

While I don't claim to understand how entanglement works across space, I'm even more confused at how it could work across time. Is this an example of entanglement swapping? Or in a broader sense is entanglement both time and space independent? Could someone try the impossible and help me understand the idea?

The authors also mention that one interpretation is the measuring the first particle on the first entangled pair steers the dynamics of the second pair. In fact, this is normal, if you have two maximally entangled particles and you measure one of them, you have now placed the other one into a definite state.

So effectively you have a photon in a definite polarization state and then you do a projection (measurement) onto a bell state. The result of the bell state measurement is to find out which bell state it is now in. And it performs an entanglement swap.

If the first pair were entangled to have the same polarization as was the second, then when you do a measurement of one of each pair into a bell state you entangle the other two.

This should sound entirely undeep. And it isn't deep, it is a regular entanglement swap, and even the authors say that you can interpret it as the measurement of the first particle influencing the latter results. It isn't like the polarization measurement result on the first particle determined everything, it doesn't tell us which bell state you get, but if you did the experiment with matter then there is a well defined probability current and which part of the beam ends up where is influenced by "irrelevant" factors like if you adjust the spacing for the bell measurement to give an extra half wavelength to one of the paths to adjust which detector corresponds to which bell state.

Not an answer to the original question, but here is a general thought: Under these circumstances (and for more counter-intuitive ones such as quantum eraser) I tend to find solace in thinking of a wave function as a "static" function over a space-time manifold (instead of considering it as "dynamics" w.r.t. time as a special coordinate). It's a solution to a set of PDEs (QFT being a part of that which we understand well) on the space-time manifold. If you do not consider time to be a special variable, this just makes sense -- you cannot change the solution only in one part of the manifold and hope it will satisfy the PDEs in the entire manifold -- you will have to change it at every point in space-time if you wish to still have a differentiable function that satisfies the PDEs on the entire space-time manifold. "Detection" or "observation" does exactly that by changing the solution in one part of space-time (the equations governing which are still not well-understood), and to compensate for that, the entire wave-function on the entire space-time needs to be changed accordingly.

Causality and locality are mere "illusions" imposed by the dynamics of special relativity on classical particle. Wave functions, on the other hand, circumvent those constraints by having their governing PDEs already Lorentz invariant.

Of course take these words with large grains of salt, since these are mostly my personal hypotheses/interpretations.

5
What is time teleportation?
15
Entanglement in time