Mixing of quarks, neutrinos... and leptons?

Then why do charged leptons not mix?

particle-physics standard-model leptons
Share
Improve this question
edited May 3 '16 at 23:14

Long answer: Let's recall some facts about the standard model. You have three quark weak-doublets $Q_i = (u_L, d_L), (c_L, s_L), (t_L, b_L)$ for $i=1,2,3$, and six quark singlets $u_{Ri}=(u_R, c_R, t_R)$ and similarly for the down-type quarks $d_{Ri}$. The Yukawa couplings for these quarks, which are what end up giving them mass after Higgsing, look like this (I have made no attempt to match this to some standard notation, this should just serve to give the idea):

If it weren't for these couplings the standard model would have an $(SU(3))^3$ global symmetry under three independent unitaries acting on the generation indices of the doublet, up- and down-type singlets respectively. In other words we could make field redefinitions

with three independent unitaries $U^{Q,U,D}$ without changing anything else in the Lagrangian apart from the Yukawa terms. That means we could choose $U^Q$ and $U^U$ to diagonalise the up-type quark term (A general fact of matrix algebra: you can diagonalise a matrix if you are free to multiply on the right and left by independent unitaries). So you can diagonalise $y^U$ at the expense of choosing $U^Q$ and $U^U$. Now we try to diagonalise $y^D$, but there's a hitch: we're no longer free to choose $U^Q$. We can only choose $U^D$, so we can't completely diagonalise $y^D$. After symmetry breaking there will inevitably be off-diagonal terms (unless there is some really incredible unexpected flavour symmetry!) which will cause oscillations between the down-type quarks (d,s,b). The CKM matrix, which is related in some way to $y^D, U^Q$ and $U^D$, measures this.

So how are leptons different? You just replace $u\to e, d\to\nu_e,$ etc. In the pure standard model there are no right-handed neutrino singlets analogous to $d_{Ri}$. So you can diagonalise the lepton Yukawas and be done with it. But if you bring in an extension of the standard model to explain neutrino oscillations (which requires at least two right handed neutrinos - I'll assume for simplicity there are three, one for each flavour), then you will have a Yukawa matrix for the neutrinos like there was for the down-type quarks, either appearing directly in your theory or as an effective operator after integrating out some more complicated hidden sector. Now the same logic applies as before. You can always diagonalise the charged lepton Yukawas, no worries, but you don't have enough freedom to completely diagonalize the neutrino Yukawas. There is an analog of the CKM matrix called the PMNS matrix in this context.

This is not to say that neutrino oscillations have no (potentially) observable consequences on the charged leptons. Consider this diagram:

This is clearly forbidden as a real process by energy conservation, but if you radiate a photon then you can get the real lepton flavour violating decay $\mu^- \to e^- \gamma$ which people have looked for. (Check out the Particle Data Group for the current limits on the rate.) Neuneck points out that the standard model rate for this process is very small, so, while it is technically nonzero in SM, any observation of this process will be strong evidence for beyond standard model physics.

It is as @dmckee says, the weak eigenstates are the same as the mass eigenstates for the leptons, therefore the corresponding Cabibo angle is zero.

Without going into the mathematics this plot says all: 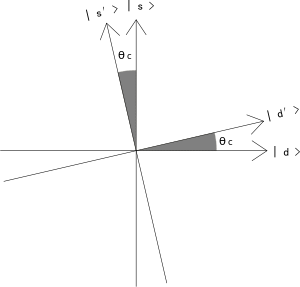 The CKM matrix is an experimental fact:

Note, however, that the specific values of the angles are not a prediction of the standard model: they are open, unfixed parameters. At this time, there is no generally accepted theory that explains why the measured values are what they are.

Thus that the mass eigenstates and the weak eigenstates for leptons have zero angle is an experimental observation too.

Generally physics theories answer how one state implies/transforms into another. "Why" questions can be answered by "how" answers until one reaches the "that is what the experiment says". This is one of those "why" questions.

Somewhat reluctantly, I decided to add to the otherwise excellent technical answers above, since none confronted the fundamental false premise of your question, "why do charged leptons not mix?". Of course they do. Charged weak currents merely link generations.

Historically, in 1960, when Gell-Mann and Levy introduced this mixing, only the u, d, s quarks were known, so of course, they were looking only at the upper row of the Cabbibo matrix and naturally they had d and s mix into d' and s'. But, in full fairness, an s weak-couples to a "mixture" of u and c.

But you see the point: the r.h.side expression, written completely in terms of mass eigenstates of leptons, does not much care who is charged and who is neutral. Since we know so little about the $\nu_i$s it would be perverse to pretend the charged leptons mix into $l_1, ~l_2$, and some of the answers justify the logic of sticking to the present convention.

But, deep down, the formal structures have never failed to be the same. I urge my colleagues to give the $\nu_i$s memorable names (Huey, Dewey, and Ratatouille, anything!) so they are thought of as the real, physical MCoys, would have distinctive flavors if they were quarks!, unlike the odd formal entities of convenience in production and detection, like $\nu_e$, $\nu_\mu$, $\nu_\tau$, with which we are stuck today, an effective confusion machine; but they are reluctant to go there before firmly pinning down the hierarchy of masses...

NB: Looks like, finally!, SM school charts are beginning to clean up their act, listing neutrino L,M,H mass eigenstates in their listings of generations, aligning with quark practice.

Not the answer you're looking for? Browse other questions tagged particle-physics standard-model leptons or ask your own question.

15
Do electrons oscillate into muons just like electron-neutrinos into muon-neutrinos?
13
To what extent are lepton and quark generations tied in the Standard Model?
7
Quark mixing vs neutrino mixing, mass eigenstates, weak states and detection
2
Quark condensate alignment with Yukawa Higgs couplings
2
Mass and flavour eigenstates in SM
3
Why is the muon decay a Flavor Changing Charged Current (FCCC) process?
2
Have there been more distinctive names suggested for neutrino mass states $\nu_1, \nu_2, \nu_3$?
-1
CKM matrix flavour vs mass eigenstate implication for decay of mesons

0
What is the difference between leptons and baryons?
7
Quark mixing vs neutrino mixing, mass eigenstates, weak states and detection
0
Is there a name for leptons that are not neutrinos?
1
Difference between the CKM and the PMNS matrix
2
PMNS matrix versus CKM matrix -- how precise is the analogy?
1
Flavor-changing neutral currents (FCNC) and leptons oscillations