Is a total solar eclipse a common phenomenon?

The total solar eclipse is only possible because the Sun and Moon both subtend the same angle when viewed from Earth (about half a degree). Amongst planetary systems this is likely to be rare because it requires the moon to be at just the right distance, or conversely to have just the right radius.

While the chosen answer isn't incorrect it doesn't really answer the question -- that it isn't that rare on other planets.

For a total eclipse you have to fall into the Umbra portion of the shadow. From this image you can see that the size of the moon and the distance from the sun as well all play an important role.

If we look at the planets and moons in our solar system (we don't know much about others outside our system) it breaks down like this:

Mars - 0%, the moons are too small for a total eclipse you only get partial eclipses. The moons themselves experience total eclipses often when Mars blocks the sun. During some seasons this can happen everyday for Martian moons. Here's partial eclipse caused by Phobos passing in front of the sun taken by the mars rover Opportunity:

Jupiter, Saturn, Uranus and Neptune can experience total eclipses, since they all have substantial moons and the Sun appears small from them. Eclipses are most common on Jupiter, because its moons orbit in the same plane with the Sun. In fact Jupiter just had a total eclipse June 19, 2013 but it was not visible from Earth. There are many nice spacecraft photos that show dark shadows of the moons on Jupiter's disk. Unfortunately, since none of the giant planets have solid surfaces (all of their outer parts are composed of gas), one cannot stand on them and watch the eclipses. But their moons have solid surfaces and offer spectacular view. Moons of Jupiter experience eclipses once per each orbit, and those around Saturn can regularly see the Sun being eclipsed by Saturn's rings before and after the regular eclipse.

Here's IO causing an area of a total eclipse on Jupiter taken by Hubble telescope: 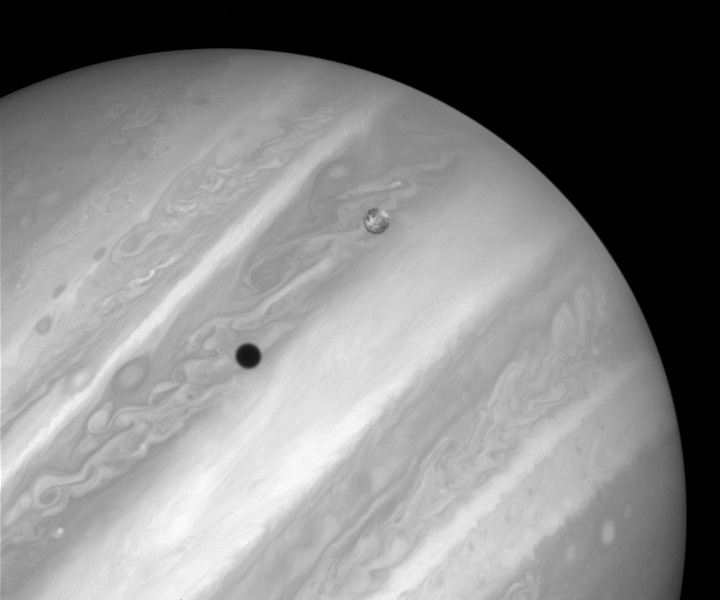 Pluto has large and close moon Charon that can eclipse its tiny Sun for more than an hour. Due to the large tilt of Charon's orbit and long year of Pluto, eclipses happen only for a couple of years per each century.

Not the answer you're looking for? Browse other questions tagged astronomy moon eclipse or ask your own question.