The Role of Active and Passive Diffeomorphism Invariance in GR

I'd like some clarification regarding the roles of active and passive diffeomorphism invariance in GR between these possibly conflicting sources.

1) Wald writes, after explaining that passive diffeomorphisms are equivalent to changes in coordinates,

"This 'passive' point of view on diffeomorphisms is, philosophically, drastically different from the above 'active' viewpoint, but, in practice, these viewpoints are really equivalent since the components of the tensor $\phi*T$ at $\phi(p)$ in the coordinate system $\{y^\mu\}$ in the active viewpoint are precisely the components of $T$ at $p$ in the coordinate system $\{x'^\mu\}$ in the passive viewpoint."

It seems that Wald is saying that there is no mathematical difference between the two, and that both imply the same physical consequences. It seems that Gaul and Rovelli, however, are saying that only active diffeomorphism invariance has physical meaning that may influence the dynamics of the theory. Can anyone explain?

I think the best approach is to try to understand a concrete example:

Here we don't think of P and P' as different points, but rather as the same point and $(13,13)$ are just the coordinates of P in the new coordinate system $X^a$. 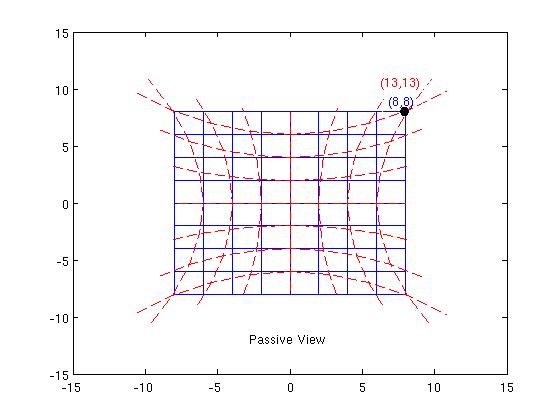 One description of the active view that is sometimes used is that points are "moved around" (in some sense perhaps it's better to think just of an association between points, "moving" implies "with respect to some background"). So in our example, we'd think of the point P as having been "stretched out" to the new location P'. (These locations are with respect to the old $x$ coordinate system). 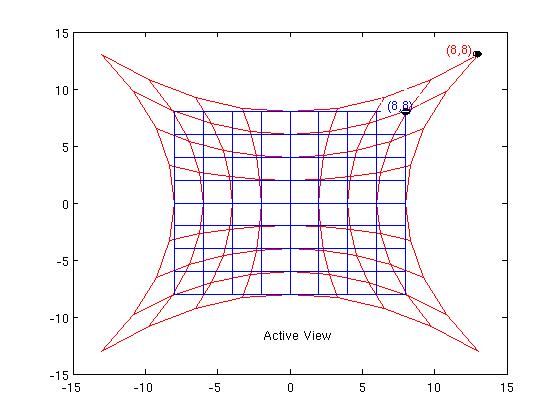 The thing that GR has that other theories don't is the concept of "no prior spacetime" (see Misner Thorne Wheeler), meaning all structure has to be dynamical. Fixed background fields are incompatible with the theory. But I don't see how this has anything to do with diffeomorphism invaraince.

If one takes a vacuum solution to the Einstein equations, it is true that an active diffeomorphism will yield another solution. However, the unmapped geodesics will not in general be geodesics of the mapped metric. Any unmapped structure could be incompatible with the mapped Einstein equations, so to get a new solution we need to map everything, including all other fields (if any exist) as well as all sets of points (including geodesics). At this point, we have found a new solution which is gauge equivalent to the old solution, and it could also have been found just by looking at the old solution in new coordinates.

When we say that time translation invariance is a symmetry that leads to conservation of energy, this has nothing to do with diffeomorphism invariance, even though time translation is a diffeomorphism applied to just the metric (or everything except the metric). This symmetry is a statement about the transformation of the matter relative to the metric (it is still a solution), or a statement about the transformation of the metric relative to itself (it is unchanged). We know that the conserved quantity (energy) is physical since it can take different values for different initial conditions.

t-coordinate translation invariance on the other hand is one kind of diffeomorphism invariance. This is the invariance of the action (on-shell or off) when everything (metric, all other fields, and initial conditions) is mapped in the t-direction, and it holds even when no isometry exists (like in fixed background curved space, or in GR). There is no interesting conserved quantity associated with it, so it is a gauge symmetry.

I'd say Wald says it rightly.

A diffeomorphism is a map of the manifold into itself, which is natural to think about as moving points around (just think about it pictorially: arrows between two copies of the same manifold). However, this moving things around is not something meaningful in differential geometry -- all points in a manifold are equivalent, in the sense that their neighbourhood looks like $\mathbb{R}^n$.

Then, the motion that we think is associated with a diffeo can as well be thought of as relabelling of the points: If all points are equivalent, what we do when we are moving them around is just changing their names. This is why we can take the passive viewpoint that diffeos leave points untouched and just change coordinates.

In other words, the notion of moving a point around involves a background structure: something moves with respect to something else. This background structure is missing in differential geometry, and this is why we can think about the same operation (a diffeo) as moving points around or leaving them where they are and changing coordinates.