In this Veritasium video, a home experiment is presented which appears to produce a very good double-slit interference pattern with normal sunlight.

The experiment is an empty cardboard box with a visor and a placeholder for a microscope slide with two slits on one side. This is arranged with the slits and visor facing the Sun, so the interference forms on the bottom of the box. 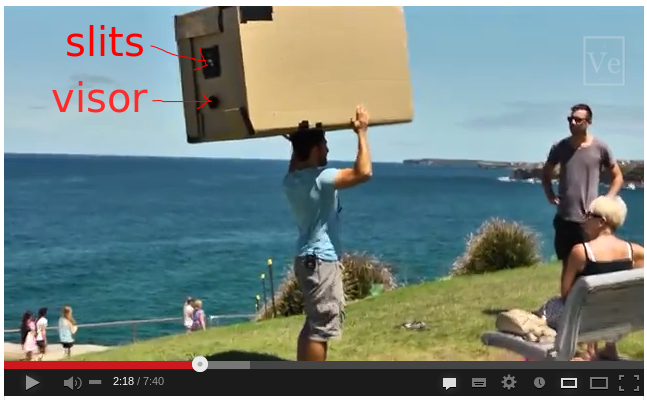 They claim to observe a good interference pattern from the two slits: 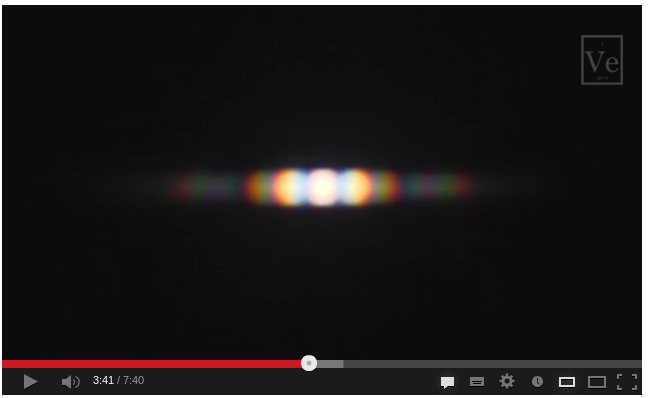 Discussions of interference in optics textbooks often stress that coherent light is needed to produce such patterns, and that sunlight and other thermal sources of light do not have such coherence. How, then, is this possible?

What do people mean when they say "coherent light"? Well, it can be a few different things, but the relevant criteria in this context are:

So if you have light coming from every direction between 10 degrees and 20 degrees, you see a blurry composite of all those different double-slit patterns. It's possible that it will be so blurry that you can't even see that there's any pattern there -- it's just blurred out into a smooth line. But it's also possible that it will be only a little bit blurred out and the pattern is still recognizable.

The reason there's a cardboard box in the youtube video is to ensure that all the light from the sky that makes it to the slit is travelling in more-or-less the same direction. (Do you see how that could be done? Take a cardboard box, poke a small hole in it, and then put a double-slit far from the hole ... all the light at the double-slit is now coming in the same direction, i.e. from the hole.)

Frequency (or wavelength) is basically the same: Different frequencies of light make different interference patters, and we see a blurry composite of all those different patterns at once. If more monochromatic light was used (e.g. red laser light), the pattern would be much less blurry and easier to see, especially far from the center of the pattern. Luckily we have color vision, so we can (to some extent) recognize the composite pattern for what it is -- we see rainbows near the center, not just a blur.

“Interference is observed only when the light from the slits is coherent” (by the way, coherent light is defined as having all photons in the same phase, not just about the same wavelength and direction, as one answer here seems to suggest.) The statement can be challenged on three grounds:

It has been argued that light from say a filament lamp is usually passed through a single narrow slit (as well as a colour filter) before arriving at the double slits. Without this “coherer”, the interference pattern is not observed. While experimentally true, the explanation is erroneous. Two incoherent photons arriving at this slit do not suddenly become coherent because they pass though a small hole together.

These two conditions can be met by passing light from an incandescent lamp through a colour filter and a small hole, or by using a laser. The fact that laser light is also coherent is quite unimportant. 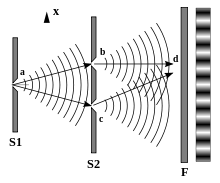 The first screen generates a point source, so as to create a coherent wave . If it is a pin hole the geometry assures that all the photons come from the same original tiny source of light. Nice illustration here , page 5. Coherent means that the phases describing the mathematical form of the wave are not randomized.

In the video above the slits must be narrow enough and the distance between them small enough so that the wavefront arriving at them is similar to a point source wavefront.In any case the interference pattern is sort of blurred due to the many frequencies.

The intensity pattern on the screen by the an incoherent source is given by:

$D$ = distance between the slits

$M$ = width of the light source

$z$ = distance from the screen to the double slit

$L$ = distance from the light source to the double slit

When the experiment is performed with sunlight this formula gives for the coherence of the sunlight:

So with this slits separation the light coming to the sun is partially coherent.

Plotting the pattern with the formula indicated above for z = 1m and a = 1 mm we get: 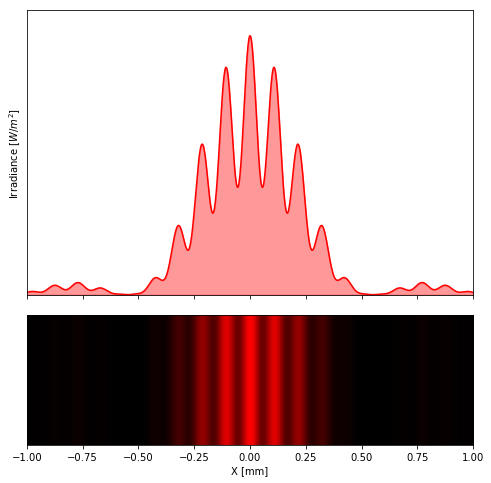 You can see in the plot that the fringes are still visible.

I made a video explaining and simulating how the double slit experiment with incoherent light works. Hope that it helps!

If the source is far away, light acquires a certain degree of coherence. Have a look at the Van Cittert–Zernike theorem, as pointed in wikipedia:

[...]the wavefront from an incoherent source will appear mostly coherent at large distances

The resulting fringes are different for different colors, but any color is maximum for straightforward direction. So, you see the bright spot at the center.

Then, the wavelengths our eyes are sensible to are not very different for this experiment. In other words, you may choose a distance between the slits such that wavelength/distance is the approx the same for all the frequencies your eye is sensible to (from red to blue), i.e. you choose a large distance. Then, the all frequencies between red and blue will approx peak at the same position. Blue will peak slightly before than red. From the figure, you indeed see the overlapping fringes given by the highest frequency you can see with your eyes (blue light) and the lowest (red light) soon afterwards.

This is possible because the pattern you see is made of coherent light. The source of the coherent light is the hole. Each color hits the screen where it is supposed to. If you only had one color you would notice the repeating pattern and it would be easier to realize that it was coherent. If you look close you will see where the colors repeat themselves over and over and over.

This answer is in the domain of classical electrodynamics. For a quantum description, look at Bill Dixon’s answer. 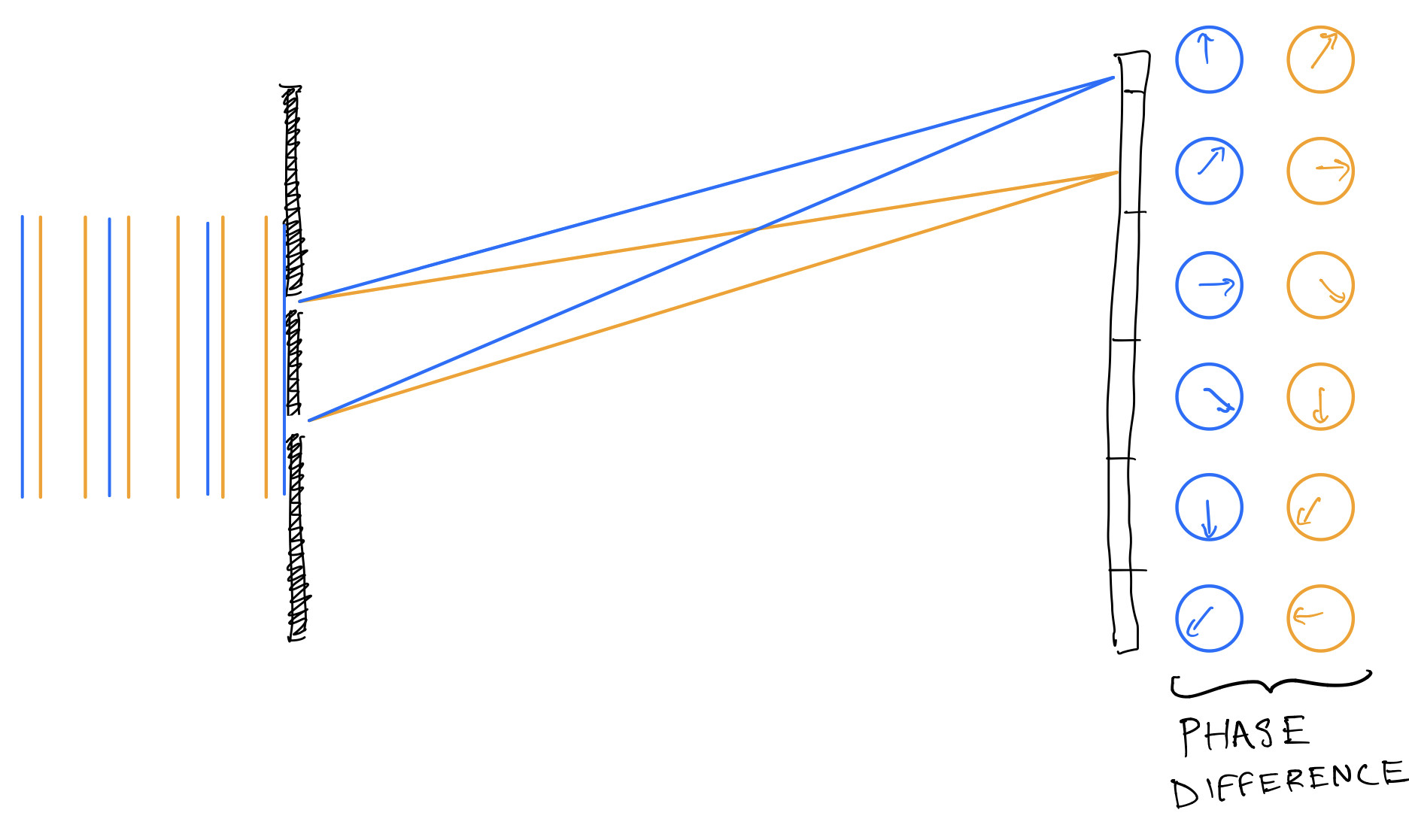 To get plane waves (approximately) one uses a pinhole sufficiently far before the double slit that acts as a collimator. So finally you’ll see an overlap of $N$ double slit pattens for each of the $N$ different frequencies present.

Newton and Young didn't have coherent light, they worked with white light and saw color fringes. But there is a second condition. The dimension of the light source has to be very small or the source has to be at a big distance (in relation to its dimension). In this cases the photons propagates parallel to each other and do not overlap each other on the observation screen.

The following equations predict the phase difference between to light sources, when the light reaches a screen. These equations assume coherent light. In other words, the photons having the same phase when the photons leave the slit.

Compliance with these equations (a clean interference pattern) can indicate a high coherent light to random light ratio.

Not the answer you're looking for? Browse other questions tagged visible-light double-slit-experiment interference home-experiment popular-science or ask your own question.