Is it correct that tires quickly get bald when used at high speed?

In my investigation, tires will quickly get bald if we ride a motorcycle at high speed. Is it correct? How to explain it in physics? Does the friction increase at high speed rotation?

Update: The word "quickly" means that the tire gets bald with less distance traveled.

Leaving my conceptual musings in the comments1 for what they are, I also found some (presumably) experimental evidence. 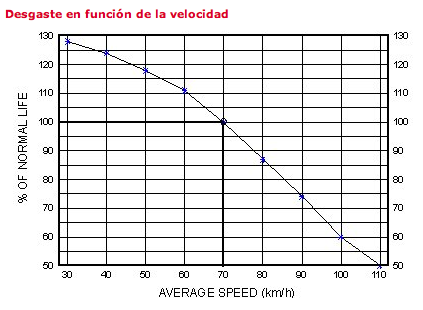 This apparently is from a Pirelli2 study. But I cannot find the study itself. Are these cars (or bikes!?) on normal roads, on an oval? Who knows? I really don't know "the experimental set-up" underlying this graph. (The name is "tread-wear-func-avg-speed", which looks rather good.) I assume "normal life" is measured in $\text{km}$ here.

1 I actually transferred those to here:

A bit of a guess that others may use or ridicule: The tires slightly compress at where they touch the road and then decompress again elsewhere (where the tire is more round). This produces heat. If you drive slowly, this heat will escape more easily into the environment than if you drive fast. So, during the same distance driven, a fast driven tire will have a higher temperature than a slow driven tire. This heat does something to the wear of the tire. My problem is, that I don't know what that something is and how it depends on the outside temperature and the tire stuff.

Also, but I think this might be a smaller factor, if you drive faster you have more friction with the air. I think (not too sure), this has to be overcome by more friction on the road. If I have this right, then this surely points towards high speed baldness. But, I think the factor in my previous comment is bigger (and more uncertain).

I just looked at "Rolling resistance", where I spotted a third factor, this one pointing in the opposite direction: "rolling resistance has been found to decrease as temperature increases (within a range of temperatures: i.e. there is an upper limit to this effect)". My conclusion, thus far, is... Excellent question!

I think this problem is much more scientifically solved by applying classical mechanics. Friction is obviously key over here as that's what's causing the tyres to bald.

Let's first look at the way we calculate kinetic friction:

Pretty simple right? N is the normal contact force experienced by the body for which we're calculating the friction experience by it from the surface. $\mu_k$ is the coefficient of kinetic friction and is a constant for two surfaces. But look here, there is no effect of velocity influencing the amount of friction experienced for an ideal tire (i.e, a tire which retains its shape regardless of heat applied on the tire from friction).

So, moving with high velocity in a straight line is not likely to damage the tire. While there may be some credibility to the other answers explaining how the surface area of the tires (and consequently friction) expands when moving at high speeds, there is no evidence that the friction during high linear velocity itself will make a difference because the kinetic friction is constant for a moving object, regardless of its velocity.

But, what if we consider circular motion?

I imagine that a good part of Pirelli's data came from testing their tires on circuits. A good part of most racing tracks consists of turns. And here, the velocity makes a difference.

Let's look into the mechanics of how this works:

For a vehicle (or anything for that matter) moving in a circle with some constant linear velocity, it requires an acceleration towards the center of the circle. This acceleration changes the direction vector of velocity and is called centripetal acceleration.

...and it is calculated by the expression:

Multiplying by mass, we get centripetal force:

Now, when a vehicle moves in a curved path, the static friction between the tires and the road prevents it from sliding off the circular path. It's easy to imagine that if there wasn't enough friction, the vehicle would slide and crash against the walls of the circular track.

Static friction is given by the same expression as kinetic friction (except $\mu_s$ is a variable coefficient and depends upon the sum of forces acting on the object:

And this $f_s$ is providing the centripetal force.

Here, we can see that friction will depend on the square of the velocity of the vehicle! So taking sharp turns at high velocity will create a lot of static friction between the tires and surface, wearing them out much faster!

So yes, driving at high speeds will definitely wear the tires out faster when taking turns, whereas it won't make a big difference when driving in straight line.

There are two main factors that will increase wear on tyres at high speed.

Firstly increased forces especially when accelerating, cornering and breaking. Forces when cornering are especially significant because they increase with the square of the speed.

Secondly the increased speed will heat the tyres which softens them so that they wear faster. Racing tyres are designed to give their best grip when hot (up to 100 centigrade), but they wear out very quickly.

The faster you go, the higher the wind resistance. To sustain your speed, you need to apply a force to match the air resistance. Because the only way to do this is through your tires, the tire contact patch has much larger shear forces on it.

Not the answer you're looking for? Browse other questions tagged newtonian-mechanics friction rotation or ask your own question.

1
Explaining the restorative force in a bifilar pendulum
2
Accelerate the car by static friction
0
Tire pressure physics
1
Does the friction between the tires of a bicycle and the ground increase as speed increases?