Why do meteors explode?

A report on the Chelyabinsk meteor event earlier this year states

Meteoroids come in a very large range of sizes, from specks of dust to many-kilometer-wide boulders. Explosions like that of the Chelyabinsk meteor are only found meteors that are larger than a few meters in size but smaller than a kilometer.

Though the details are argued endlessly by those who study such phenomena (it is very hard to get good data when you don't know when/where the next meteor will occur), the following qualitative description gets much of the important ideas across.

The basic idea is that the enormous entry velocity into the atmosphere (on the order of $15\ \mathrm{km/s}$) places the object under quite a lot of stress. The headwind places a very large pressure in front of it, with comparatively little pressure behind or to the sides. If the pressure builds up too much, the meteor will fragment, with pieces distributing themselves laterally. This is known as the "pancake effect."

As a result, the collection of smaller pieces has a larger front-facing surface area, causing even more stresses to build up. In very short order, a runaway fragmentation cascade disintegrates the meteor, depositing much of its kinetic energy into the air all at once.

This is discussed in [1] in relation to the Tunguska event. That paper also gives some important equations governing this process. In particular, the drag force has magnitude $$ F_\mathrm{drag} = \frac{1}{2} C_\mathrm{D} \rho_\mathrm{air} A v^2, $$ where $C_\mathrm{D} \sim 1$ is the geometric drag coefficient, $\rho_\mathrm{air}$ is the density of air, $A$ is the meteor's cross-sectional area, and $v$ is its velocity. Also, the change in mass due to ablation is $$ \dot{m}_\text{ablation} = -\frac{1}{2Q} C_\mathrm{H} \rho_\mathrm{air} A v^3, $$ where $Q$ is the heat of ablation (similar to the heat of vaporization) of the material and $C_\mathrm{H}$ is the heat transfer coefficient. Since the mass-loss rate scales as $A \sim m^{2/3}$, sublinearly with mass, smaller objects will entirely ablate faster, setting a lower limit on the size of a meteor that can undergo catastrophic fragmentation before being calmly ablated.

Meteors that are too big, on the other hand, will cross the depth of the atmosphere and crash into the ground before a pressure wave (traveling at the speed of sound in the solid) can even get from the front to the back of the object. There simply isn't time for pressure-induced fragmentation of the entire object to occur, meaning the kinetic energy isn't dissipated until the entire body slams into Earth.

Remember that meteoroids are celestial objects. At these scales, it is quite common for relative velocities to be extremely large.

When such a fast-moving object enters the atmosphere of the Earth, the air slows it down due to its viscosity. However, the meteor is moving very, very fast. Unlike most falling objects, it doesn't get a chance to even reach terminal velocity.

With the meteor moving at this speed, there is a lot of heat generated (compression, as well as friction/viscosity). This boils the meteor (many meteors contain ice or dry ice), leading to a buildup in pressure. If the boiling happens too quickly, the meteor will explode.

Airburst, I think, it is called.

An article on wired.com covers exactly this question

the rock was already going very fast when it entered the Earth’s atmosphere. There is no way the air could get it down to terminal velocity – there just wasn’t enough distance for a rock this large. But this air resistance is essentially the reason that it explodes 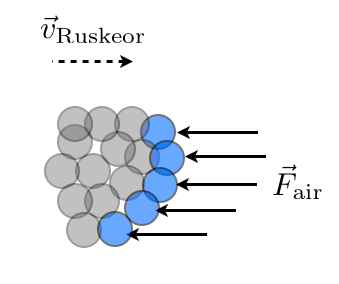 Some of these Ruskeor pieces are colored blue. These are the pieces that interact with the air. So, the air pushes on these front pieces to slow them down, but how does the rest of the rock slow down? Simple, the blue pieces push on the other pieces. So, in a way, this rock is being crushed. Crushed because the air resistance force pushes on the front, but not the rest of the rock.

The author chose to call the meteor 'Ruskeor' as it was a meteor over Russia.

The article referenced provides the calculations if you are interested

I suspect that there are multiple phenomenologies involved, but for a gravitationally bound pile of aggregate, there is not a lot of cohesion. Thus it is possible that entry dynamic pressure might be high enough to cause the "pancake" behavior described above.

But I suspect that there is another way for more cohesive objects to "explode". It is almost certain that the center of pressure of a random rock is not aligned with and "ahead of" the center of mass along the direction of flight, so torques will arise that (even over short periods) will tend to rotate the object. If the torques are high enough, and the inertia small enough, the accumulating rotational velocity will overcome the strength of materials and the object will come apart. This seems unlikely for very large objects which won't spin up fast enough, and very small objects which are relatively strong. But in the middle there is a class of weak object of appropriate size where the breakup probably can be attributed to rotational velocity and centrifugal force.

Not the answer you're looking for? Browse other questions tagged explosions meteors .

5
Compression vs. Friction - what happens when space objects enter Earth's atmosphere?
1
Energy yield of a meteor blast - how to explain the discrepancy?

5
Compression vs. Friction - what happens when space objects enter Earth's atmosphere?
0
Why are there more meteorite falls during April?
22
Why do the Perseids only happen once per year, not twice or four times?
2
Why do meteors heat up when they fall through the atmosphere?
12
How and why would a glass table break in this manner?
1
Energy yield of a meteor blast - how to explain the discrepancy?
4
How would a nuclear explosion really operate in outer space?
0
Where would the energy go if a nuke intercepted a meteor?
0
Shaped Charge Physics