What is physics behind States of matter?

I found a Trick to freeze water in about half a second, in this trick, When I open caps of a plastic bottle of cold water, cold Water freezes in a chain process, You can see the freezing process.

What is physics of The process of freezing water?

If you mean what takes place in each transformation between different states of matter then you must first understand the components of each state. A solid: •The particles cannot move, only vibrate • The bonds that hold particles close together will be very tight • The solid will not be able to be deformed due to the fact, that the particles cannot get any closer, and the object will denser than a gas or liquid. A liquid: • The particles can move past one another but are still held so that they have a fixed volume • The particles are held together by loose bonds and they can move. • The liquid can be moulded to a shape and be deformed, it is not as dense as a solid but denser than a gas. A gas: • The particles can go anywhere and are not held by any bonds and can take on any form. • They can be moulded into any shape. •The gas is not as dense as liquid or solid. Plasma: •The particles are separate and the nuclei are apart from the electrons (ionization). A picture is below of the states of matter: 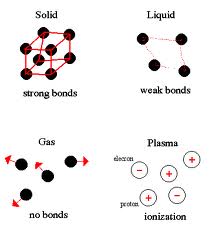 There is a graph to show changing states of matter below: 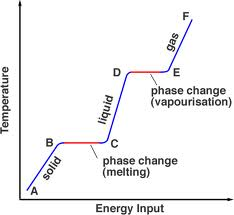 The graphs shows that when there is a mixture of states of matter the particles cannot heat up anymore due to the fact, certain states of matter cannot be above or below certain temperatures.

When freezing water specifically, (at a particle level), the bonds strengthen and the particles become locked into place, this results in ice which is solid and cannot be deformed. At an atomic level though, water is different to all other liquids, as it expands. This happens when water particles join together they must have a certain formation. This is because water is made up of 2 positive particles and one negative. The positive must pair with a negative, resulting in a gap between particles, this is shown in the picture below: 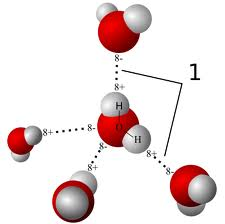 Not the answer you're looking for? Browse other questions tagged entropy states-of-matter or ask your own question.

5
What determines a state of matter?
1
States of Matter and Equilibrium
1
Doubt about states of matter
87
Why does matter exist in 3 states (liquids, solid, gas)?
24
Freeze water in red-hot container
0
Clarification of wording in matter phases
5
What is the difference between the states of matter and the phases of matter?
0
What is quark-gluon plasma?