QCD in the non-perturbative regime

what is this means that "non-perturbative QCD are the exploration of phases of quark matter, including the quark-gluon plasma."?

Due to asymptotic freedom, the perturbation series expansion of QCD breaks down at low energy. The expansion parameter, the coupling constant, becomes too large and therefore we cannot rely on results anymore. The value of the coupling constant approaches the order of $1$ at an energy of several hundred MeV, a scale referred to as $\Lambda_{QCD}$ ("Lambda-QCD"). Perturbation theory becomes reliable several GeV above this scale. But what does that mean for the so-called "QCD phase diagram", which is a diagram with temperature as the vertical and baryon chemical potential (or density, which might be easier to imagine) as the horizontal axis?

As you can see in the image in the other answer, there is a variety of interesting phenomena at a relatively low energy scale. This means that a perturbative approach in the conventional sense (expansion in the coupling constant) is not sufficient to gain a complete picture of QCD. Phenomena like the transition to quark-gluon plasma, colour-superconductivity and colour-flavour-locking are out of reach. But what can be done in order to gain some insights?

This is where non-perturbative QCD comes into play. On the one hand, there are traditional approaches, for example lattice QCD, where you assume that dynamics takes place on a discrete lattice and solve problems numerically. On the other hand, there are novel approaches like the so-called AdS/QCD duality, which is a manifestation of the AdS/CFT correspondence. It applies the holographic principle and maps a strongly coupled field theory (which is similar to QCD) to a string theory in its weak-coupling limit which allows for the treatment of problems which would be otherwise inaccessible.

I don't get what you're asking?

What it means that non-perturbative QCD is the exploration of phases of quark matter, including the quark-gluon plasma?

Because, at high energies, you're at the so called asymptotic freedom regime. At this regime, your quarks interact weakly and the perturbative calculations are possible. And quark-gluon plasma is theoretically assumed to have existed microseconds after the universe was created (because of high temperatures at the beginning of the 'Big Bang').

But it is still not clear how this happens, the mechanism behind it, and this is what they are seeing at the LHC indeed: Q-G plasma.

My friend worked in the ALICE experiment at CERN and he had a thesis from this field. They are studying the impulse correlations in Pb-Pb collisions and are trying to see if the Q-G plasma state emerges from these collisions using Hanbury Brown and Twiss effect. That way, from correlations of two-body wave functions, one could deduce things about hadronization of quarks - since Q-G plasma exist only for a tiny amount of time, and quarks start to hadronize very quickly, you can only see that effect, and try to see if that effect really came from Q-G plasma. But it's still not clear if the Q-G plasma was created, and they're working hard to find that out.

Oh, also you have this QCD diagram 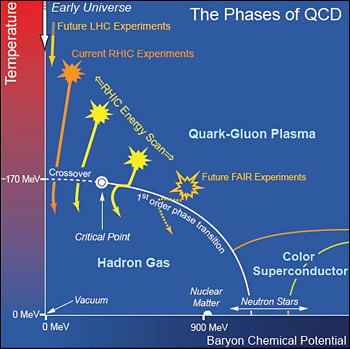 Which describes why you need high energies to produce Q-G plasma.

I hope this clears things a bit...

Not the answer you're looking for? Browse other questions tagged quantum-field-theory quantum-chromodynamics non-perturbative confinement or ask your own question.

31
What is the significance of the QCD scale parameter $\Lambda$?
6
Does the color of a quark matter in a meson?
1
Can we quantitatively understand quark and gluon confinement in quantum chromodynamics and the existence of a mass gap?
4
Reference request for non-perturbative QCD
1
Goldstone bosons, quark and gluon masses counting in color-flavor locking QCD
5
How to "build" a proton