What is the physics behind Roger Federer's & Rafael Nadal's iconic shots

Two Iconic players of Tennis, Roger Federer & Rafael Nadal, with two iconic shots. One with a top spin forehand & other with a slice backhand.

I want to understand the physics of these two shots.

In my knowledge, the two shots behave the way they do because of the relation between velocity of the ball, friction with the air & pressure difference from the top & bottom side.
From basic physics, I know that, as velocity increases, pressure decrease. An example I learned in Physics class: If you stand too close to a fast moving train, you will be sucked in. Because of high velocity of the train, pressure in front decreases while pressure on your back is constant & hence you are moving towards the train.

If i am wrong about my Physics up till here, correct me.

My real doubt is, why does the ball, after pitching, bounce more (for Nadal) & less (for Federer) Can anyone explain this physics. Assume they are playing on Clay court

Here is a link to Roger Federer's best backhand slices In the video, first there are a series of flat slices which are retrieved below the knees, much lower than the net. In the next couple of shots, there are some loopy slice which die out after landing.
Here is Nadal's topspin forehand See the 2nd point at 0.20. Look where Federer takes that shot from, near his head.

You are absolutely correct that the change in direction of the tennis ball is due to the difference in pressure on the top and bottom of the ball. Below is an example of a top-spin shot with the ball traveling from left to right. 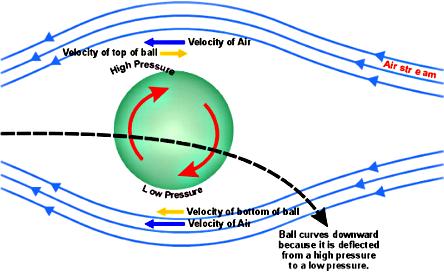 Here you can see the streamlines around the ball: 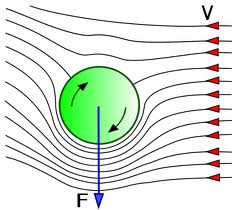 Now onto you specific question of why it bounces differently. Let's look at the forces on the ball in back-spin: 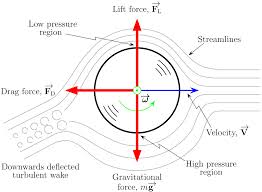 When the ball hits the ground on the other side of the court, the upward vertical velocity (speed moving up) that it leaves the ground with is proportional to the downward vertical velocity (speed moving down) that it hits the ground with. There are two forces in the up and down direction on the ball: the gravitational force and the lift force as seen in the picture above. In a back spin shot, the lift force is up. If we only look at the velocity of the ball in the vertical direction, you can see that the ball will fall slower to the ground since there is an additional force on the ball up. Thus, the ball will hit the opposite side of the court with less vertical velocity and thus not bounce as high as "usual". The reverse is true for a top-spin shot. The top-spin increases the downward force and increases the velocity in which it hits the ground since the aerodynamic and gravitational forces both force the ball down. This increases the bounce height. (Note that I have neglected the fact that the lift force direction is perpendicular to motion and not gravity. But since the ball moves perpendicular to gravity most of the time, this is a good assumption and way of showing the physics.)

There is also the friction effect when the ball hits the ground. This changes the trajectory of the ball and would have the opposite perceived effect on bounce height as above: 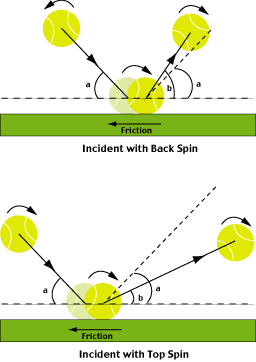 The change in ball direction does not affect the bounce height as much as the difference in vertical velocity when the ball hits the ground. Note that this balance of effects is greatly dependent on the velocity of the ball. Since the tennis pros hit the ball at a very fast speed, the pressure forces have a greater affect than the frictional forces when the ball hits the ground. When amateurs play tennis, they may spin the ball with the same rotational velocity but without the horizontal speed to cause much curving of the ball. This would cause a higher bounce with back-spin and lower with top-spin. As with everything, it is a balancing of forces.

Not the answer you're looking for? Browse other questions tagged pressure velocity aerodynamics or ask your own question.