Horizon and Unruh radiation for a finite period of acceleration

It's a well known fact that an observer that accelerates at a constant rate from $-c$ at past infinity to $+c$ at future infinity sees a horizon in flat Minkowski spacetime. This is easy to see from a spacetime diagram once you realize that the union of past light cones on such a trajectory has a boundary that divides the spacetime into two regions - one inaccessible by the accelerating observer.

This leads to the classic result of Unruh radiation when one looks at the quantum field theory for such an observer. The horizon plays a crucial role here.

How does one go about determining whether a horizon is seen by a general class of worldines? In particular, is there any reason to believe that a horizon would exist for an observer that is stationary for all time except for a finite period of acceleration and deceleration?

Is there any other class of worldlines other than an indefinitely accelerating observer for which a horizon is known to exist in flat spacetime?

It seems to me that this question is quite trivial, so I hope I am not overlooking anything.

For a horizon to form, the observer needs to be "as light-like as possible" (otherwise the slope of his world-line will be more than 45 degrees and union of his past light-cones will cover all of universe). And because there is no other way of achieving that than just asymptotically by accelerating indefinitely I think your question is resolved.

The question seems to point to the question of whether or not one can “turn on” the Unruh effect. This of course has some experimental relevance, for if we test it with highly accelerated particles then we do have to prepare a system where the acceleration is initiated. So this question is related to other funny problems, such as the physics which generates a black hole. The exact solution is an eternal solution, but an astrophysical black hole is generated by the implosion of a stellar core.

On the Rindler chart projections of null geodesics onto a spatial hypersurface are semicircular arcs. A highly accelerated observer will observe a laser beam bent into an arc, just as a projectile on this frame will move on a curve. A Killing vector defines a foliation of spatial surfaces orthogonal to static frames. This is a metric on these spatial surfaces according to a conformal transformation of the original metric, defined as the Fermat metric. For a fixed time $t~=~0$ the line element $$ ds^2~=~g_{tt}dt^2~+~g_{ij}dx^idx^j, $$ gives the Fermat line element $$ d\sigma^2~=~{{g_{ij}}\over{g_{tt}}}dx^idx^j. $$ The Killing vector $\xi_t~=~\partial_t$ defines a foliation of these surfaces so the static spacetime is a trivial vacuum solution to the Einstein field equation. The Fermat metric for Rindler observers is $$ d\sigma^2~=~x^{-2}(dx^2~+~dy^2~+~dz^2),~0~<~x~<~\infty.~-\infty~<~\{y,~z\}~<~\infty, $$ which is the hyperbolic three space ${\cal H}^3$ in the upper half of the space. The projection on $z~=~0$ is the Poincare half place ${\cal H}^2$ with semicircular geodesics. This space is a conformal map from the plane ${\mathbb R}^2$.

This spacetime is very interesting, for it has an analogue with de Sitter and anti de Sitter spacetimes. Another characteristic is that this is eternal. The exact solution assumes a Rinder wedge for an accelerated mass or observer in Minkowski spacetime that is perpetual. This is analogous in a way to the eternal black hole solution, which is somewhat fictional. However, the eternal solution approximates very closely a final state of a black hole formed from a collapse. In a similar manner if one accelerates a particle to $a$ at a time much earlier than one performs and experiment then the exact theory above will serve as an approximation.

I feel somewhat compelled to write an addendum to this.

Let us assume that the mass starts accelerating at a time $t~=~0$. This would be a case where only the upper half of the Rindler wedge exists. We now assume that the particle accelerates for a long period of time, so it approaches $v~=~c~=~\epsilon$. The motion asymptotes to a null line, and the path is half of a hyperbola. The absence of the bottom null asymptote will have less and less influence on what happens later on. This is a physical statement. First off if an inertial observer is moving at a velocity $u$ in the direction of the accelerated mass, this mass will appear to approach this observer and then recede. For $u$ large enough this accelerated mass would appear to come at this observer with a velocity $v’~=~-c~+~\delta$ where $\delta~>~\epsilon$, but not by “that much.” The accelerated mass will then approach this observer, stop and accelerate outwards. So “modulo” this small error, this situation is a good approximation to the eternal accelerated case.

We now have the problem of detecting this. The inertial observer does not see the Unruh radiation. The accelerated observer does. The temperature is $T~\simeq~10^{-21}K/cm-sec^{-2}$ So you need a pretty serious acceleration to observe anything on that frame. Clearly a real observer can’t be on the frame. So not only do we need a start for the acceleration, we need a stop as well. The object on the accelerated frame will absorb this Unruh radiation, and if the inertial observer can “catch” the object its temperature may be measured. If this object is a Bose Einstein condensate of Ba ions that are accelerated enormously through a high $\vec E$ field region, say in a capacitor, the Unruh radiation might be enough to change the phase of the BEC.

I wrote a paper a fair number of years ago which got “honorable mention” for the Gravity Essay Prize where I proposed just this. Unfortunately nobody seemed interested in actually doing the experiment --- which is what I wrote this paper for!

Clearly we can’t have an eternal accelerated object, so we must work with approximate situations. However, some physical reasoning should strongly suggest that a removal of the $\infty$ or eternal aspects of the Unruh results can be made into a small perturbation.

Since you're really interested in the horizon as part of an approach to understanding the Unruh effect, I will address that instead of the initial Question. What experimental resources are we to consider an accelerating observer A to have? If A can make only local measurements in the laboratory La in the diagram, then (in the Wightman or Haag-Kastler axiomatic backgrounds) A can make exactly the same deductions about the state from their measurements as can an observer who can use the laboratory L0. 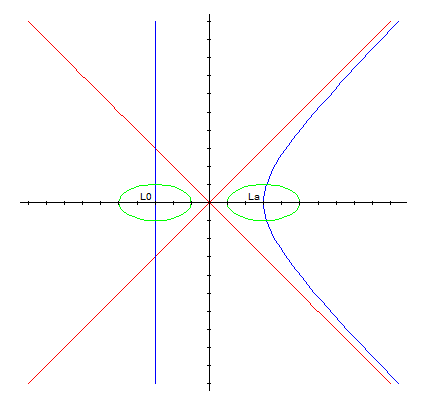 Because of the Reeh-Schlieder theorem, what is at space-like separation from the two laboratories is equally accessible to both (in the sense that both can get as close as they like to knowing what the statistics of measurement results would be everywhere in Minkowski space by making precise enough measurements in their local laboratory, on the assumption that the Wightman axioms hold or that the Haag-Kastler axioms hold). [It would have been better not to have drawn the two laboratories the same shape, because the shapes are not relevant to the Reeh-Schlieder argument, but it's uploaded now.]

I take your discussion about the Unruh effect that is prompted by the earlier Answers to boil down to the fact that it's only if our laboratory is not confined to a finite region of space-time that we can make any global claims about the state of the universe, despite the Reeh-Schlieder theorem. We could only possibly determine whether the state is in the folium of a thermal state instead of in the folium of the vacuum state if our laboratory is infinite in extent. Having available as our experimental resource a particle that interacts with the vacuum state in an ad-hoc way for the whole of an accelerating trajectory, as is proposed in Unruh and Wald's Phys. Rev. A 29,1047(1984), even though it's infinite in extent, seems unlikely to be enough to make such a fine-grained determination.

I don't plan on putting the terse comments that I made earlier on the Question into this Answer, however they do inform the perspective a little if you choose to think about the Unruh effect in something like the way I have done here. The above is essentially tentative, something I've been mulling for several years, so I'd be glad to have suggestions for how anyone here would fill the gaps or of what I haven't taken into account that will shoot it down.

Finally, thanks @dbrane for the Question. I held off giving it +1 because although it seemed definitely useful it didn't seem quite clear enough, but when I realized how much it was stimulating, I decided that it was better for me than had it been clear.

PS. Hans Halvorson's paper on "Algebraic Quantum Field Theory" (with Michael Mueger), http://arxiv.org/abs/math-ph/0602036, is a good on-line resource, although in many ways it takes you one step higher than Haag. His treatment of the concept of a folium is more sophisticated than Haag introduces in his Local Quantum Physics, in terms of quasi-equivalence of states. Hans is one of the few Philosophers of Physics who can really come up to scratch with Mathematicians on AQFT.

If Unruh effect is a real process it is obvious that turning off the acceleration will not make the temperature suddenly skip to zero. We can wonder what happens for an eternal inertial observer who is only accelerated during the period [-L , L]

Rovelli gives an answer for an observer with such a finite life. https://arxiv.org/abs/gr-qc/0212074 As the notion of temperature is only well adapted for equilibrium Rovelli generalizes it.

here β is the inverse temperature.

Not the answer you're looking for? Browse other questions tagged quantum-field-theory special-relativity reference-frames event-horizon unruh-effect or ask your own question.

11
Is there a relativistic (quantum) thermodynamics?

25
Do all massive bodies emit Hawking or Unruh radiation?
17
Why is there a flux of radiation in the Hawking effect but not in the Unruh effect? (and other questions)
5
Non-coinciding event horizon and apparent horizon
7
Can the Unruh effect be confirmed by the LHC?
2
Unruh radiation and conservation of energy
8
What does an accelerated body's *interaction* with Unruh radiation look like in an inertial frame?
2
Why do people use equivalence principle differently in Hawking radiation?
2
What is the effect of the locality condition if a „Rindler observer“ hovers close to a black hole?
6
Unruh effect for finite period of low acceleration