Why is a hard sphere gas correlated?

where $u(r)$ is the interaction potential, $T$ is the temprature, $n_0$ is the density and $f(r)=\mathrm{e}^{-u(r)/T}-1$ is the Mayer function. $g_2$ roughly measures the probability of finding two particles seperated by a distance $r$. $n_0$ is the small parameter of the perturbation theory.

If you then apply this result to hard sphere (infinite repulsive potential of diameter $a$), you get this: 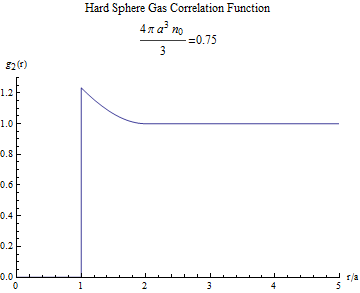 Now it makes perfect sense that $g_2$ is zero for $r<a$. Also the asymptote to one at large $r$ is part of the definition of $g_2$, meaning that particles are uncorrelated at large distances. The problem is the peak at $r\sim a$ which implies that you are more likely to find particles clustered together, despite the complete absence of any attractive forces! Why is that?

Our lecturer seems to think it is because when two particles collide they stop, then bounce, hence spending more time in the vicinity of each other than for an ideal gas. But this seems dubious because perfect hard sphere collisions are instantaneous. I can imagine three possibilities:

So what is it?

In fact at high density, you should also observe oscillations in the g(r) and not a single peack. The width of the bumps in these oscillations is related to the particle size.

I think gatsu's right: it's because of an entropic attraction resulting from the fact that two spheres whose centers are less than $2a$ apart leave more room for other spheres. To see why this happens, it may help to draw a picture:

Here, the blue spheres all have radius $\frac12a$. The gray dashed circle around each sphere has radius $a$, and shows the region from which the centers of other spheres are excluded.

Since the spheres A and B are more than $2a$ apart (measured from their centers), the total volume from which they together exclude other spheres simply equals the sum of their respective exclusion volumes. Spheres B and C, however, are closer than $2a$ from each other, and so their exclusion zones partially overlap, leaving more room for sphere A and any other spheres in the gas.

Looking only at pairwise interactions, this explanation predicts that the quasi-attractive interaction between the particles should appear only at distances less than $2a$. This matches your graph, which looks flat at $r/a > 2$. Of course, a more through analysis would also consider clusters of three or more nearby particles, which ought to produce some effects at longer distances (at least at sufficiently high gas densities), but presumably your perturbation analysis also neglected these higher-order effects.

Not the answer you're looking for? Browse other questions tagged statistical-mechanics or ask your own question.