Why do chimneys have these spiral "wings"?

While walking around I noticed something very peculiar. Many chimneys had spiral "wings", while others didn't. I came up with two possibilities:

I feel that both of those possibilities are silly. So, why do some chimneys have those spiral "wings"? And why other taller chimneys don't? 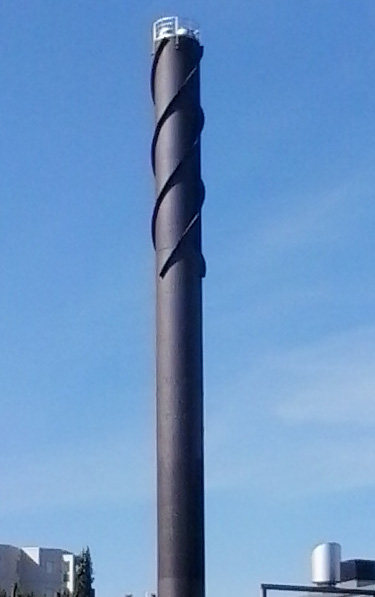 The spirals are used to prevent the formation of Kármán vortex sheets downwind of the chimney. They work by diverting the wind upwards on one side of the chimney and downwards on the other, creating a three-dimensional airflow pattern that disrupts the vortex sheet. Without them, the vortex shedding could cause vortex-induced vibration in the chimney, which in strong winds might be enough to damage the (relatively thin-walled and flexible) chimney.

The circle on the left represents the (smooth) chimney, viewed from above, with wind coming from the left; the cyan and purple dots are tracer particles showing how air passing the chimney on either side joins the vortex train generated behind the chimney. The Kármán vorticity is an essentially two-dimensional phenomenon; in three dimensions, each vortex would basically be a tall rotating column of air, with one end on the ground and the other end joining together with the adjacent vortices in a complex turbulent region at the altitude of the top of the chimney.

Not the answer you're looking for? Browse other questions tagged air vortex or ask your own question.

9
Why does an airplane have more lift near the ground?
4
Why did they used to make the mill chimneys so tall?
0
Can one model a spiral galaxy with a similar manifold to one for a whirlpool?
5
Why does the vortex form in the von Karman Vortex Street?
3
Why does a vortex have so much suction power?
0
Why superconductor have vortex
2
Why do cyclones have translational motion?
0
Optical Vortex Generation Using a Spiral Phase Plate (SPP)