As far as I understand, going around the critical point, it is possible to transform a liquid into a gas without seeing a phase transition.

Does this also mean that there is no clear separation between a gaseous phase and a supercritical fluid ? This is more or less what can be understood for the dotted line between the two that usually appears in a phase diagram such as the following: 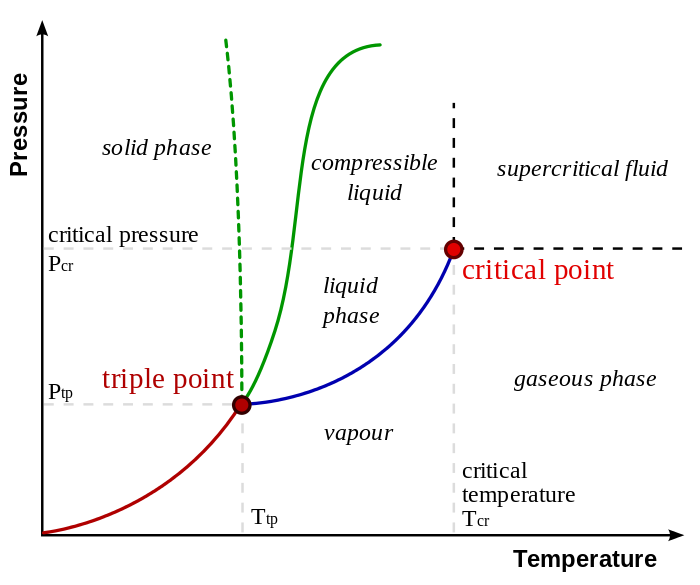 So my question is: Is there a standard physical measure for deciding whether a given fluid is in gaseous phase or in supercritical state? Alternatively, is the boundary between the two clear-cut or somewhat fuzzy?

By the definition of supercritical fluid, the state are clearly defined if the critical point is known. As far as the measured temperature $T$ and pressure $P$ that is higher than the critical point, you know it is supercritical fluid. There are no clear separation between gaseous phase nor liquid phase, in the sense that by changing $T$ and $P$ only by a little bit, it will go into another "phase".

After some more reading, I think I better understand the issue. I summarize my findings here, please correct me if something is wrong.

The key experiment to show the critical point is to keep the liquid/vapor in equilibrium, while slowly moving to the right along the phase boundary (simultaneously increasing the temperature and pressure). At some point (the critical point), the two phases become identical and the resulting fluid is called supercritical.

Since we were moving along the phase boundary, the supercritical fluid appears when both the temperature and pressure become supercritical, which justify the standard definition of a supercritical fluid. The following 3D diagram from http://en.wikipedia.org/wiki/Phase_diagram is quite useful for visualizing the critical point. 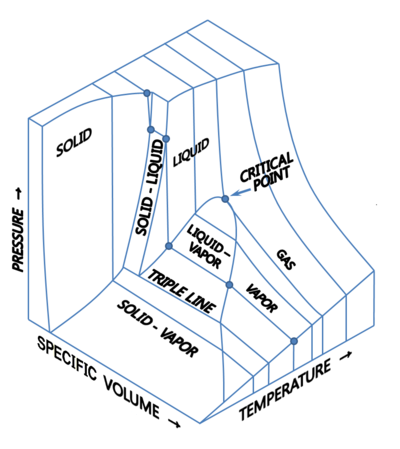 Moreover, if one were to seek a delimitation somewhere, the Windon line between liquid-like and gaz-like behavior (see http://www.nature.com/nphys/journal/v6/n7/full/nphys1683.html) would be a better candidate.

Not the answer you're looking for? Browse other questions tagged thermodynamics fluid-dynamics or ask your own question.

16
Is this Landau's other critical phenomena mistake?
3
Questions about compressing a liquid in a piston
2
Lennard Jones liquid vapour phase transition
2
Order of phase transition: Which free energy to use?
1
How is isothermal expansion/compression physically possible when it assumes heat flow between equally hot bodies?
0
How accurate is the following description (quoted) of what happens when a liquid is heated in a closed vessel?
0
Stability, unstability (and metastability) in liquid-gas phase transition: unstable in regards to what?
3
Critical point of a pure substance