Once I discussed cars and there was a question about rate at which the car gains its speed ($100\:\mathrm{km/h}$) from standstill (i.e. acceleration). At some point of conversation it came up that cars cannot gain their $100\:\mathrm{km/h}$ speed for such tiny time interval I proposed (less than $3$ seconds), because it can't go with acceleration more than $g$ i.e. free fall accel on Earth (we talked about wheel-driven vehicles - not a rocket-driven - and all we know that at certain acceleration value the wheels lose their grip with ground and vehicle is not moving forward it's burning tyres istead).

I was disagree, I feel intuitively that the critical acceleration for the wheel traction exists but it couldn't be equal to $g$ or approaching to, because it should look like a some deep law of the nature (between friction and acceleration) and this phenomenon would be widely known (but I couldn't find anything).

We started searching for contra-evidence. I found Bugatti Veyron which achieves $100\:\mathrm{km/h}$ speed roughly for $2.5\:s$ and some Formula 1 cars. But the sources of acceleration values were considered as non-reliable and not proven.

I know that the friction and cohesion proccesses are very untrivial, it brings electromagnetic interactions between atoms and molecules on microscopic level as well as surface geometry on macrolevel - that was another my argument against the statement that acceleration can't be more than $g$ without traction loss - because such complex and heterogeneous process as wheel traction can't have such a simple solution and equal to $g$.

So, could someone prove it or provide a formula or methods to show that critical acceleration of wheel-driven body without traction loss could be more than $g$ (or less)?

There is an approximate law that states that the frictional force, $F$, is given by:

where $W$ is the normal force and $\mu$ is the coefficient of friction; $\mu$ is normal taken to lie in the range zero to one. For a car the weight $W$ is given by $mg$, and the acceleration would be $F/m$, so dividing through by $m$ we get th acceleration to be:

If $\mu$ has the maximum value of one then the acceleration cannot exceed $g$ because trying to accelerate faster would just make the tyres spin.

The equation we started with is an approximation, and friction is actually a far more complicated phenomenon that that simple law suggests. For example car tyres deform and can key into irregularities on the road to increase the friction. Racing car tyres can have effective values of $\mu$ far greater than one, so they can accelerate at more than 1g. In fact a drag racer can accelerate at around 4g.

To accelerate a wheel-driven car from standstill with accelerations above $1g$ is entirely feasible provided the coefficient of friction between the tires and the road exceeds one.

There is absolutely no reason why a coefficient of (static) friction should be limited to values below unity. Think of two rough surfaces where the roughness acts as 'interlocking teeth'. Under such circmstances the force required to make the wheels slip along the road can be (much) greater than the normal force of the road on the wheels.

The wikipedia page on friction mentions that silicone rubber or acrylic rubber-coated surfaces have a coefficient of friction that can be substantially larger than 1. Meal trays in Singapore Airlines probably deploy such rubber and are reported to have a coefficient of friction greater than 1 when in contact with almost any object (note the slope exceeding 45° in below picture). 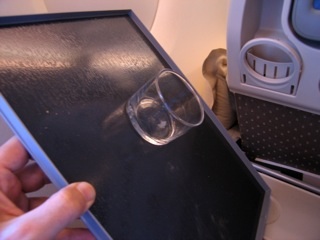 To accelerate a wheel driven object faster than $g$, I suggest you try four-wheel drive and acrylic rubber-coated wheels. A radio-controlled model car would do as a proof-of-principle.

Interesting question. Why 3 seconds in the first place, though? If acceleration is 9.8 meters per second squared, what correlation does 3 seconds, 100 km/h and gravity have?

the wheel will lose traction only if the torque applied is bigger than the friction with the floor (which is $\mu mg$): $$\tau_{car}=I \alpha >\mu mgR=\tau_{friction}$$ Now, $I$ is the inertial moment of the wheel, $\alpha$ the angular acceleration, $R$ is the radius of the wheel.

"Sticky" tires may improve coefficient of friction close to 1.0, but unless we have cogged wheels on a cogged (teeth) rail, friction is limited by gravity. Zero to 60 mph in 2.7 seconds, or zero to 100 kph in 2.8 seconds is the best we can expect from any friction-dependent drive wheels. "Two wheels good, four wheels better?". No. Our lateral acceleration is still limited to 1 g. Heavier vehicle? No, we'll just have to overcome more mass/inertia. "Double AA fueled" dragsters overcome gravitational limits by dumping more methanol and nitrous oxide into the cylinders than can be burned. This unburned fuel explodes (or burns very quickly) at the external orfice of the exhaust tubes, which are pointed upwards. (Look at a picture of one under full acceleration. The exhausts are pointed up.) This has the effect of pushing the vehicle downwards without additional mass (weight). At 8,000 to 10,000 rpm, the exhaust tubes are expelling 2,600 to 3,300 explosions per second of methanol/nitrous oxide/atmospheric oxygen. Reading auto company claims of 2.2 seconds for zero to 60? According to "Car and Driver" magazine, these measurements sometimes "exclude an initial 'rollout'". I do not know what that means, but to me it sounds like a fudge factor Isaac Newton would not have approved of.

Not the answer you're looking for? Browse other questions tagged acceleration friction or ask your own question.

0
maximal acceleration of a wheel-driven vehicle

2
Accelerate the car by static friction
2
How can friction be the driving force of a car, while at the same time slowing it down?
0
maximal acceleration of a wheel-driven vehicle
2
What is the exact role of friction in rolling without slipping?
4
The physics of a car during drift