The other day I saw this life-hack: 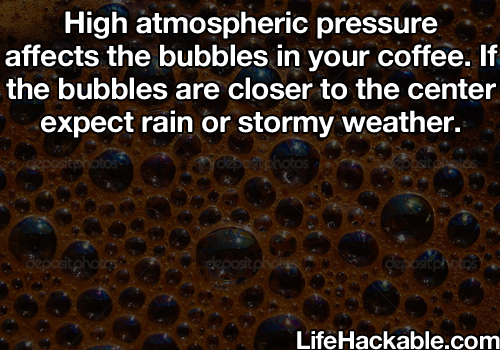 And I was wondering how true it is. First of all, I always thought(listening to weather forecasts) that low-pressure atmosphere is what correlates with rain; although I never learned the argument behind it.

Anyway, even if low atmospheric pressure correlates with storms and rain; how much(and in what sense) does this affect the bubbles in my morning coffee(if any)? My initial guess is that there should be a threshold pressure that will differentiate whether the bubbles will stick to an edge or suspend in the middle. Since this is an everyday-life question, I should say that experimental answers are welcome as well as rigorous theoretical ones.

Also, I am wondering if we can make a barometer based on the bubbles in a mug of coffee? If so, how sensitive it would be?

This is quite humorous.

In an 1883 offical US military publication, "Weather Proverbs" by 1st Lt. Dunwoody, at page 107 it is stated "When coffee bubbles collect in the centre of the cup expect fair weather. When they adhere to the cup, forming a ring, expect rain." This is the opposite of the lifehack proverb!

In 1997 Dave Thurlow, using a grant from the US National Science Foundation, insisted that the "bubbles in the middle mean sunny" version was supported by theory. http://www.weathernotebook.org/transcripts/1997/01/31.html However, he bases this on the coffee/air interface switching from concave up to convex with change in atmospheric pressure, which is extremely doubtful. Instead, the material of the cup wall and its interaction with the coffee would determine concavity.

The fact that the proverb and its opposite are both professed should be a strong indication that there is no truth in the proverb, absent some logical reason based upon the Young-Laplace equation.

Not the answer you're looking for? Browse other questions tagged pressure everyday-life home-experiment atmospheric-science or ask your own question.

773
Cooling a cup of coffee with help of a spoon
1
Weather Radar Interpretation - Radial Rays
7
Why does the milk frother on my coffee machine make so much noise?
8
Atmospheric pressure experiment using a cup with a fluid to hold a glass plate
8
How to make the bubbles in my soda drink last longer?
22
Why do bubbles make a sound?
2
What's the point of normalizing air pressure in the weather report?
1
Pressure increase with air bubbles in catheter