What does "all future lies within the event horizon" mean?

I was trying to find an answer as to why light does not escape black holes and I stumbled upon this Phys.SE question. In the answer it said that:

"Since all future lies within the event horizon, photons are trapped inside the black hole."

See my answer to Why is a black hole black? for a discussion of why light can't escape from a black hole.

The future light cone is simply the set of all spacetime points that can be reached from your starting position i.e. the edges of the cone are all the points you could reach travelling at the speed of light. So the statement that the future light cone lies within the event horizon is just a restatement of the fact that there is no way to get out through the event horizon without travelling faster than light. You're correct that this statement does not constitiute a proof. The answer I've linked above does constitute a proof, though it does require a bit of maths.

An "event" in relativity is defined as something with a set of coordinates in 4-dimensional spacetime. Events are separated by an interval, which in a flat spacetime, could be written as $$ ds^2 = -c^2 dt^2 + dx^2 + dy^2 + dz^2\ , $$ where the implicit notation that $ds^2 \equiv (ds)^2$ is used. This interval is fundamental in relativity because it is an invariant that all observers agree on.

The interval for a light beam is always zero. That means, for example, if we send a light beam along the x-axis, where $dy=dz=0$, then $cdt/dx = \pm 1$. Thus if we drew a graph of $x$ vs $ct$ (on the y-axis) then light would travel along paths with a gradient of $\pm 45$ degrees from their starting point. Since light is the fastest signal you can send (much faster than a carrier pigeon), then these lines will bound all possible events in the future that you could influence. They also contain the coordinates of all possible events that you could be at in the future, no matter how fast you travelled. This is known as the future light cone.

A similar cone can be extended backwards in time to bound the set of coordinates from which a light beam (or anything slower) could have reached you; and this is known as the past light cone. 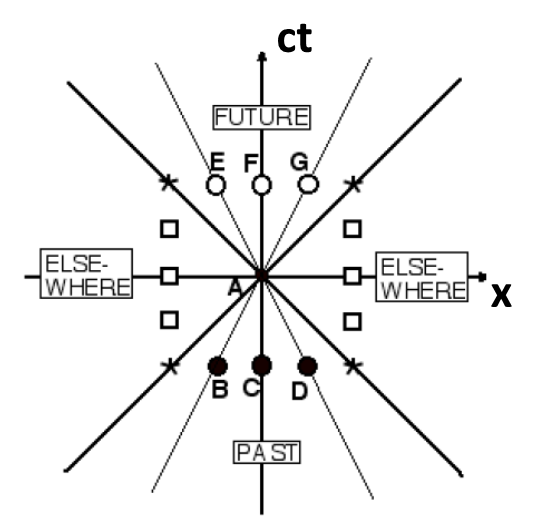 If the interval $ds^2$ between two events is negative then these events could be causally connected, because one lies in the future light cone of the other. This is known as a timelike interval. If the interval is negative, it is called spacelike and the two events cannot be causally connected. That is, something at event A can influence, signal to or even travel to event E, but cannot influence or travel to event B, or any of the unlabelled events marked with squares in the "elsewhere" region, because they are not inside the future light cone of A.

These ideas translate to General Relativity where the spacetime can be curved. That means the status of the interval as an invariant is the same but the expression for the interval is more complicated - the coefficients multiplying $dt^2$ etc. may depend on $t, x, y, z$ or indeed other parameters like the mass or spin of a central object. $$ ds^2 = -f_t(t, x, y, z, ...)c^2dt^2 + f_x((t, x, y, z, ...)dx^2 + ... {\rm etc.}\ . $$ The ideas about future and past light cones are also valid in General Relativity. The light cones are also defined by the condition $ds^2 = 0$.

The complexity of the interval equation means however that the slope of the light cones could vary depending on the position of the originating event. On the face of it this seems to be saying that the speed of light may differ from $c$. Well, that is true in the sense that the speed of light expressed as a rate of change with respect to the spatial and temporal coordinates that are being used does change. But this speed is not the speed that would be measured by an observer who is local to the light beam. They would always say it travels at $c$.

In General Relativity, the coordinate system you express the interval equation can be become something of an issue and gets those new to GR into lots of trouble. In non-relativistic situations we are quite used to switching between say Cartesian and spherical polar coordinates to describe the location of an object. If we were measuring the distance between two points on the surface of a sphere, we could say that $dl^2 = dx^2 + dy^2 + dz^2$, but we could equally and perhaps more usefully use $dl^2 = r^2\sin^2\theta\ d\theta^2 + r^2d\phi^2$. Importantly, the choice of coodinates doesn't affect what anybody would actually measure. The same is true in General Relativity.

For non-spinning black holes, the interval equation can be written as $$ ds^2 = -\left(1 - \frac{2GM}{c^2r}\right)c^2dt^2 + \left(1 - \frac{2GM}{c^2r}\right)^{-1}dr^2 + r^2 \sin^2\ d\theta^2 + r^2 d\phi^2\ , $$ the last two terms being the same as for flat spacetime (because of spherical symmetry) and $M$ representing the mass of the black hole. The reason that the interval equation has this form is because this provides a valid (and in fact the unique) solution to the Einstein Field Equations of General Relativity for the spacetime outside a spherically symmetric, time-invariant mass.

The $t, r, \theta, \phi$ coordinates here are similar to spherical coordinates, but not quite. For example, because of the curvature of spacetime, $r$ is not the "radius" and $\Delta r$ is not the separation of two events at the same $t, \theta, \phi$. These coordinates are not suitable for dealing with motion across or inside the event horizon where $r = 2GM/c^2$. At this value of $r$, you can see that second term in the interval equation blows up to infinity. This does have a meaning. It means that somebody keeping track of events using this system of coordinates would never see an object reach (or cross) the event horizon in any finite $t$.

This does not mean that things cannot cross the event horizon. According to a falling observer, measuring time on their own clock (which is not equal to $t$), they do cross the event horizon and they do fall towards $r=0$ in a finite time. To handle this we can define a different coordinate system (and there are several to choose from), which are continuous at the event horizon. Perhaps the simplest is the Gullstrand-Painleve coordinate system, where the timelike coordinate $t$ is replaced by a new coordinate $T$ that is defined as $t - a(r)$, where $a(r)$ is defined so that an increment of $T$ is exactly the same as a tick of the clock carried by an observer that is freely falling into the black hole. This removes the coordinate problem at the event horizon and the interval equation is written $$ c^2 d\tau^2 = c^2\left( 1 - \frac{r_s}{r}\right)\,dT^2 -2c\left(\frac{r_s}{r}\right)^{1/2}\,dT\,dr - dr^2 - r^2\,d\theta^2 - r^2\sin^2\theta\,d\phi^2\, . $$

The light cones corresponding to this eqution are plotted below (Figure adapted from Exploring Black Holes by Taylor, Wheeler & Bertschinger), where $r_s = 2GM/c^2$, the event horizon (where $r=r_s$ is marked with a red line and the future and past light cones are marked with an F and a P and are calculated according to the equation for $cdT/dr$ given above. 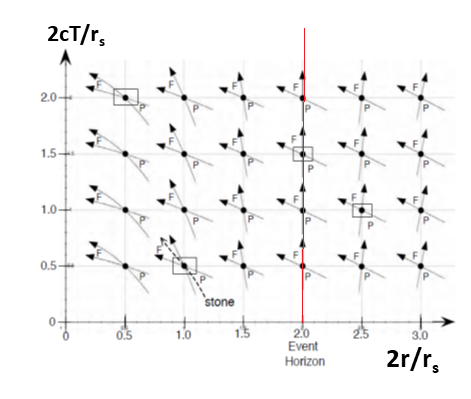 What this means is once at $r<r_s$, the light cones tip over towards decreasing $r$ and all future events inside the future light cones are at smaller values of $r$. Thus no signals can be sent to larger $r$ and even a light beam that is directed outwardly will in fact move towards a smaller value of $r$.

Not the answer you're looking for? Browse other questions tagged general-relativity black-holes causality event-horizon or ask your own question.

40
Why is a black hole black?
24
Why can't light escape from a classical black hole?