How to design wheels for a soapbox-derby racer so that it rolls down a hill the fastest? [closed]

Ask Question
Asked 10 days ago
Modified 10 days ago
Viewed 33 times
1
$\begingroup$
Closed. This question is off-topic. It is not currently accepting answers.

The following problem is from the book "University Physics", Chapter 10 entitled Dynamics of Rotational Motion.

10.2 Suppose you could use wheels of any type in the design of a soapbox-derby racer (an unpowered, four-wheel vehicle that coasts from rest down a hill). To conform to the rules on the total weight of the vehicle and rider, should you design with large massive wheels or small light wheels? Should you use solid wheels or wheels with most of the mass at the rim?

I am not sure what is meant by "conform to the rules" here, since no rules are specified.

It seems that by assumption these wheels are "round".

I started with the following conservation of mechanical energy calculation

This calculation assumes that we have two identical wheels with moment of inertia $I$ and radius $R$.

Now, a previous similar calculation in the book assumed that these wheels were one of the following uniform shapes

These are all shapes for which the moment of inertia about an axis passing through the center of mass has form $CmR^2$ where $C$ is a constant.

The constant is smallest for a solid sphere. Hence, if we were simply setting these shapes to roll down an incline, the solid sphere would reach the bottom first.

It would seem at first sight that having solid spheres for wheels is the best option. Note that $m$ and $R$ disappear from the expression.

However, this seems fishy and weird.

At this point my idea was, for a given $M$ and $R$, to come up with some other round shape with a lower moment of inertia.

To do this, all you have to do is concentrate the mass within a small radius and have a bit of mass on the rim.

I tried out an example with some numbers I came up with to try to reach the configuration of what a normal bicycle wheel would look like (except that in my case since the mass is given, I concentrate most of the mass at the center of the wheel) 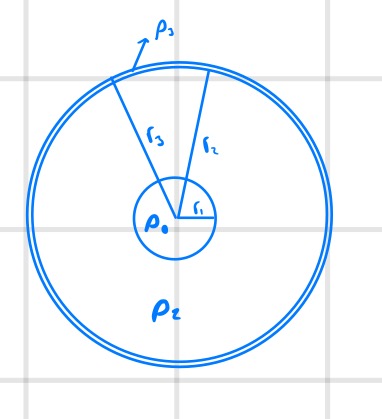 I did not draw it in the picture above, but the shape is cylindrical and has width of $h$.

Let the mass densities be

I imagine this as representing a dense core, some spokes, and a rim that is less dense than the core.

and when we compute the moment of inertia of the entire thing, if my calculations are correct, we get

This is much lower than the initially considered shapes.

Now, this is still not a satisfactory result, because I assumed that $M$ and $R=r_3$ were given.

It is not clear to me how we can find the absolute best wheel design here. And this is my question.

Here is my attempt at answer

Starting from (1) and computing the partial derivatives with respect to $R$ and $m$ (and naively taking $I_{cm}$ as constant), it seems that both are positive. Hence it would seem the best thing is to choose these to be as small as possible.

However, then I realize that moment of inertia is dependent on $m$ and $R$ and if the relationship is $I=CmR^2$ then apparently $m$ and $R$ are irrelevant.

You have a fixed energy budget (the gravitational potential energy from the hill).
You have a fixed amount of total mass (the rules). You want to reach the finish as quickly as possible, so you want as much of the energy to be placed into translational kinetic energy as possible. That also means reducing any energy that goes into other forms (such as friction, but also rotational kinetic energy).

To the extent they don't create other problems, you would be well served to reduce the required rotational energy that would be in the wheels during travel at any given speed. That should guide your decisions on size and composition.

1
Between a solid and a hollow cylinders of the same mass, which one has the greater rotational kinetic energy?
0
Is it possible to calculate how fast something will roll down a hill?
1
Why under pure roll solid cylinder rolls down faster than hollow cylinder? Should they not be the same?
0
Question on the proof of Moment of Inertia for a solid sphere
1
If I have an object which is the combination of two shape like a rod going through a sphere. Can I just add the moment of inertia of the two objects?