Predicting the mass of the Higgs particle

Physicists in Europe said that only after combining data collected at a laboratory in Switzerland with data collected at a laboratory in the U.S, were they ﬁnally able to announce the discovery of a new sub-atomic particle. Why did the physicists need so many measurements of the particle's mass to have conﬁdence that the particles weighed, on average, what the Higgs particle was predicted to weigh?

How could we predict this using probability and convergence in distribution?

Any hints would be helpful and highly appreciated.

I think there is some misunderstanding on this, the data from the US were not necessary for the nailing of the Higgs-like boson. It was the data from the two experiments at CERN, ATLAS and CMS, which are built by collaborations from universities and research institutes the world over, including the US.

On purpose two experiments were running with the same beam conditions. In the previous accelerator, LEP, there were four experiments looking at the same electron positron interactions.

The reason is because the experiments are enormously complicated, if you have a look at the links above. They are built and run by about 3000 people in a grand collaborative effort, from building the detectors to gathering the data and processing it. At every stage systematic errors can enter which are due to either bad materials or human error or unknown and unexpected responses of the detectors.

By having two detectors the experimental results are safeguarded against particular behaviors of particular apparatuses. For example, some gamma detectors might be misfiring and registering an interesting effect looking like a resonance decaying into gammas. If the other experiment does not see the effect in its different gamma detectors, then it is known it is a systematic effect and people scramble to find out how it happened in the experiment where it was seen.

Do you mean why they had to look at billions of interactions to gather a five sigma signal from both experiments? It is because most of the scattering products of the proton proton interactions at 7 TeV end up in mundane particles and generate an enormous background to the sought signal, literally looking for a needle in a haystack.The signal rides on an enormous background even though filters to eliminate the bulk of trivial have been imposed.

Here is the CMS Higgs signal: 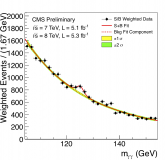 Note the enormous background under the signal.

to have conﬁdence that the particles weighed, on average, what the Higgs particle was predicted to weigh?

There is a misunderstanding here. The current theories do not give a specific Higgs mass, just a range where it should be found in, and at that different theories give different ranges.

How could we predict this using probability and convergence in distribution?

One cannot predict* the results of measurements. Data are what they are. A theory can predict what the mass should be within a particular model, and then it is validated within the measurement errors. In particular once a Higgs mass is measured and is statistically valid, the models are adjusted/chosen by this mass, not the other way around.

-* I have to qualify this. There exist programs called Monte Carlo programs that generate events to the best of the knowledge at the time, theoretical and detector boundaries and abilities. Monte Carlo events can be considered as "predictions" of the theory inputted to the program, for the particular detector setup.

The particles studied at colliders are governed by the rules of quantum mechanics, which is a probabilistic theory of physics. This is why high-energy physicists often talk about 'cross-sections', roughly the probability of a certain process occurring. Cross-sections are typically a function of many variables, including the input particles, their initial momenta, etc. In the case of the Higgs, the cross-section is very low (at 7TeV it's something on the order of 10 picobarns, I believe). This means that physicists are required to collide particles a truly spectacular number of times just to see a couple Higgs particles -- while the beam is up at the LHC, for example, I believe there are on the order of $10^8$ "events" per second! And yet it took months and months or colliding to see enough Higgs productions!

Another reason why we need so much data is what dkuper mentioned. Our detectors (that sit around and monitor the collisions) are not perfect. Taking lots of data, however, tends to alleviate such errors. Even worse, many subatomic particles have very short lifetimes, and so they tend not to even make it to the detector before decaying into other particles. The Higgs, for example, tends to decay into either 2 photons, or 4 leptons, etc. and all the detector can do is try to look for these "decay signatures." But every time you see 2 photons, you can't expect that they came from a Higgs! They could have been produced from a completely independent process. This is what some people call "background" or "noise" -- to actually get ahold of the Higgs events, you have to make sure the 2 photons really look like they came from the Higgs (i.e. satisfy certain kinematic properties) and aren't just 2 photons that were generated by some process that we don't care as much about. But of course, the analysis of data is not always perfect, and this is why physicists require a large amount of data (you may have heard the term "5 sigma") pointing to the existence (or some property of the particle, say, mass) of a particle before they can say for sure.

In physics there is a lot of noise and imprecision, because both the instruments and the theories are not perfect. Therefore, every measure comes with an imprecision factor. After many measures, this imprecision factor can be reduced until it is sufficiently low to be accepted by the scientific community. This reduction of the imprecision is estimated using the law of large numbers from probability theory.

Moreover, doing the experiment in two (or more) different laboratories without communication between them allows to diminish the error caused by specific protocol and instruments.

5
What's the Standard Model width of a 125 GeV Higgs?
8
What if the 126 GeV particle found at LHC that LOOKS like the Higgs is actually not the Higgs Boson?
5
Higgs boson in LHC
3
With the LHC about to restart as max energy, are there absolutely no hints or tantalizing signs of Supersymmetry in previous data?
10
Why did it take so long to find the Higgs?
0
On the mass of the Higgs Boson
0
The Higgs boson
0
2019 Higgs Boson Mass?
7
Help interpreting "five sigma" standard?