It's more like "Electricity tries to follow the path of least resistance". The sentence is a non-rigorous intuitive tool that helps one quickly make sense of current paths. It's not a physical law.

This comes from the behavior of resistors in parallel --this is where current has a "choice" of which direction to take. The potential difference across a resistor is equal to the current into its resistance ($V=IR$, usually called Ohm's law) in appropriate units.

What happens when you have two resistors in parallel is that the p.d. across them must be the same. Which means that $I_1R_1=I_2R_2$. So, more current flows through the resistor with less resistance and vice versa. Current still flows through the greater resistance. 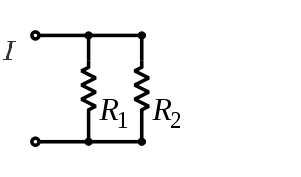 From these relations you can find out that in two cases all of the current flows through the 1st resistor:

This is the meaning of the quoted statement.

29
Electricity takes the path of least resistance?
0
Current in parallel circuit and short circuits
0
Adding a "short circuit," changing currents
2
Why does the LED turn off if the high current is going through the short?
74
Why doesn't current pass through a resistance if there is another path without resistance?
1
Will electricity follow a path of least resistance on a rotating conductor?
1
Determining impedance of the circuit from peak values of current and voltage