What happens, if a rocket is filled with a vacuum instead of high pressured air?

Suppose you put wheels under a compressed air tank

so that it can move horizontally to the right and to the left. Suppose there is a nozzle on the right hand side of the tank (in the picture on the backside, if you like).

If the tank is filled with high pressured air and you open the nozzle, the tank will move to the left. This is how rockets work and one can easily imagine that.

What happens when the tank is filled with a vacuum and you open the nozzle?

My first impression was, that the tank is moving to the right but someone told me, that it would be stand still. Is this true? What is an intuitive explanation for that?

I'd like to morph the question somewhat: what happens when a tank alternatively sucks in and expels fluid through the same nozzle?

The surprising answer is: it will move in the direction it would move if only fluid would be expelled. This phenomenon is known as Machian propulsion. Machian propulsion is utilized in so-called pop-pop (or putt-putt) boats: toy boats that deploy an ultra-simple steam engine. 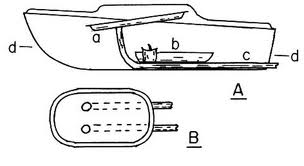 The abstract to this paper summarizes the physics:

"Many experimenters, starting with Ernst Mach in 1883, have reported that if a device alternately sucks in and then expels a surrounding fluid, it moves in the same direction as if it only expelled fluid. This surprising phenomenon, which we call "Machian propulsion," is explained by conservation of momentum: the outflow efficiently transfers momentum away from the device and into the surrounding medium, while the inflow can do so only by viscous diffusion. However, many previous theoretical discussions have focused instead on the difference in the shapes of the outflow and the inflow. Whereas the argument based on conservation is straightforward and complete, the analysis of the shapes of the flows is more subtle and requires conservation in the first place. Our discussion covers three devices that have usually been treated separately: the reverse sprinkler (also called the inverse, or Feynman sprinkler), the putt-putt boat, and the aspirating cantilever. We then briefly mention some applications of Machian propulsion, ranging from microengineering to astrophysics."

The answer to the question posed above should now be clear: when sucking in air into an empty tank, the tank will briefly tremble but not show any sustained movement. This is even the case when the tank can move without friction: the air would rush in and the tank will start to move in opposite direction, however, the inflowing air will transfer its momentum to the tank, and the tank will come to a perfect stand still.

Think of the tank with compressed air as a fan on wheels blowing the air forward and propelling the fan backwards. When the tank valve is opened the compressed air blows forward and propelling the tank backwards. Now think of the tank having a vacuum inside as a fan on wheels drawing air in from the front and blowing the air out the back propelling it forward. Now think about the tank having a vacuum inside and when the valve opens the air would rush in and pushing the tank on the inside, that is the opposite side from the valve, propelling it in a forward direction. (If you tear one end off of the paper or plastic straw cover, and blow into the straw the cover shoots off of the straw the same way the cylinder shoots off when high pressure air enters.)

Not the answer you're looking for? Browse other questions tagged newtonian-mechanics vacuum rocket-science or ask your own question.

2
Will a can filled with vacuum move when we let in air?
22
Why does blowing on a candle put it out but sucking doesn't?

10
Rocket engines: air & vacuum
4
How does a pierced vacuum move?
0
Creating vacuum in a glass by acceleration
5
Water bottle rocket: Where does the energy go without water?
70
If I stood next to a piece of metal heated to a million degrees, but in a perfect vacuum, would I feel hot?
18
Water Bottle Rocket Thrust - two calculation methods not matching
0
I'm in a moving train filled with vacuum. I'm leaning to the rear wall, so the train pushes me forward. If I drop a ball, woudn't it hit my chest?