A thought experiment on vision and curved spacetime

What follows is a long self-made example to deal with my conceptual issues of visualizing curved spacetime.

Imagine an observer floating somewhere in space. He feels no strain on his body, indicating he is free-falling and is thus moving along a geodesic.

He is a magician and has the power to conjure up glowing sticks within his hands.

Their construction is as follows (the following are valid in his vicinity of course):

1) Each stick is very thin and of 1m in length when he conjures it in his hands.

2) Each stick is rigid and mass-less

3) It glows along it's cylindrical surface uniformly. The glow varies with intensity such that it goes from complete dark to peak brightness to dark in 1 heartbeat of the magician in his local rest frame. It is thus like a clock synchronized with his heartbeat.

In curvature free space-time, his eyes will project the glowing grid lines as straight lines intersecting at infinity and the whole system will glow in the same way.

Now if space-time had some arbitrary curvature (not too high), how would the glowing grid 'lines' be projected onto his eyes?

Alternatively he could create a spherical system by making concentric glowing shells of increasing radii (where the latitudes and longitudes glow) made with uniform curvature in his vicinity. He could fix the spatial origin as wherever he wants. In flat space-time, the concentric shells would be projected onto his eyes as concentric circles. What would he see in curved space-time?

Is this how experimenters construct their 'imaginary' co-ordinates systems for work in astro-physics?

First of all, even in special relativity there is a problem with rigidity (see for instance Bell's spaceship paradox and Ehrenfest paradox). So in general relativity one could only aim for reasonably rigid objects, bearing in mind that even while free-falling they could deform or be destroyed under the action of tidal forces.

In addition to general impossibility of constructing cartesian grid in curved space-time mentioned by Julian it is worth mentioning that the grid would not be stationary even if the space-time is -- the sticks would be drifting apart (or pulled colser) in accordance with laws of geodesic deviation. So after some time the lattice would either has (constantly increasing) gaps or overlaps.

Another effect is red or blueshift of light. If the glowstick would be in the gravity well, the the magician (situated outside of the well) would observe increase of wavelength of light (or lowering of color temperature). On the other hand observer situated inside the well will observe blueshifted light from outside.

If the distance between the oscillating light source and observer is comparable to $c\tau$ ($\tau$ is the period of heartbeat) then the visible oscillation cycle would acquire additional phase. For light sources synchronized along the line starting near the observer it would appear that a wave of varying intensity is traveling along this line.

And gravitational lensing (mentioned by RedGrittyBrick) would apply if the light from the glowing sticks would travel through regions of curved space (such as near massive object). The effect could produce caustics and curve straight lines.

And for the examples of what someone could see in concrete practical cases of noticeably curved space look at the galleries of images and animations at "Space-Time Travel: Relativity Visualised". Note, that some of the renderings ignore blue/redshift of colors. 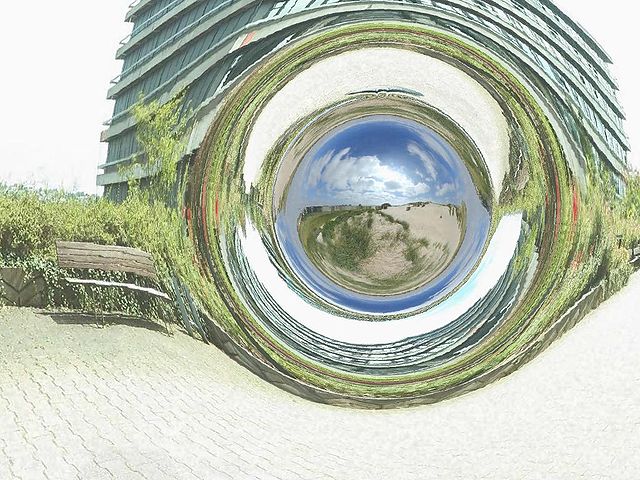 First, assuming he can make the sticks glow in synchronous with his heartbeat, the information from his heart to the sticks must travel instantaneously. In any case, he will not see them glowing in unison because the light from the farthest sticks will take longer to reach his eyes than the closer ones (assuming they are far enough so the eyes can detect the difference). Still in his frame of reference they will all light at the same time (he can calculate that but is not the way they will perceive them). Regarding the grid, if space time is not flat, then the grid elements will not longer look as squares. In general you just cannot build a square in curved space time, by square I mean a geometric form that has four sides and each one intersects at an angle of 90 degrees. Try drawing a square large enough at the surface of a ball an you will realize why (but you can do built a triangle will all sides perpendicular to each other). From inside, you will be able to perceive this. Euclidean geometry will no longer work for you.

My apologies that I can't follow your question enough to answer everything, in particular I can't see how you project your images. If you extended them in what look like straight lines to you, you'll get radial lines expanding from your position, but it seemed like you wanted a Cartesian grid.

However I do want to answer the part about strain and its relationship to geodesic motion. You did mention that the observer feels no strain and you then concluded that this means the observer moves on a geodesic. This is not correct.

An extended observer moving freely will feel strain from a non spatially uniform curvature, but this strain goes away as the extended observer gets smaller and smaller (the curvature then becomes more and more uniform over the region where the observer is), so it is not related to whether the observer is in free fall. But even a small nonuniformity will produce a small strain on an extended body. Imagine a blob of water in space, it will adjust it's volume to minimize it's surface area, so if space is curved nonuniformly it will adapt to that and not be a perfect sphere. But the extended body is still jointly in free fall.

But you are correct that a common way to deviate from geodesic motion is to produce a strain that induces an acceleration. The earth strains your foot, compressing it so that you foot will push on your lower leg to strain it so that it will push on your knee to strain it, etc. All of which result in you not moving on a geodesic when the earth strains your foot. So strains indeed can cause a deviation from geodesic motion, but so do pressure gradients (that's what keeps the atmosphere from moving geodesically), so a strain is just one way among many to try to move non geodesically.

Another issue is that no real systems ever moves on a true geodesic. Geodesic motion is a limit when the object has no mass, no energy, no spin, no charge, etc. Real systems warp spacetime themselves instead of moving on a fixed background determined by everything else. Sometimes those effects are small, other times they are not.

So any extended systems is strained by nonuniform curvature, and real systems cause their own curvature.

Not the answer you're looking for? Browse other questions tagged general-relativity spacetime reference-frames curvature coordinate-systems or ask your own question.