Why does electricity need wires to flow?

If you drop a really heavy ball the ball's gravitational potential energy will turn into kinetic energy.

If you place the same ball in the pool, the ball will still fall. A lot of kinetic energy will turn into thermal energy because of friction, but the gravitational potential energy will still be converted.

Similarly, why doesn't electricity flow without a good conductor? Why won't Electrons flow from the negative terminal to the positive terminal without a wire attaching them?

A slow drift speed means that the electrons most likely will take a long time to propagate the wave of electricity, but they should still get there.

To continue to use your ball analogy think of the ball as analogous to the electron. Now what if the ball were attached to a point by a spring? Would it still fall? It can oscillate about that point but it would not be able to escape the restraining effect of the spring entirely. The same is the case with bound electrons. They are more or less bound to the atom. If the gravitational field is very strong it may be able t o break the spring and rip the ball out of the spring. This happens sometimes in electricity too. In a lightning discharge, the electric field is so high that even the bound electrons are ripped out of their atoms thus ionizing the gas and creating what is known as plasma. With a pool of free electrons and positive ions available electric current can now flow freely through the plasma - you wouldn't need wires. But unless you have a high enough electric field to produce ionization(for ionization of air the field required is close to $10^6V/m$ - such high fields cannot be produced by the 100 - 250 V household voltages available in most countries) you would have to use wires made of conducting material where free electrons are readily available if you want to have electric conduction at normal voltages.

The medium doesn't have to be metal wires, it can be gasses (as in the case of drift chambers), liquids (say a liquid argon TPC or a wet cell battery), plasma (obvious, I hope) or solids.

The atoms that make up ordinary air are not easily ionized and they recover their electrons very quickly (because of the electrostatic force). In metals man electrons are in or near the "conduction band" and can get lose quite easily and do not recombine efficiently. Electrons in the conduction band of the metal are "free" in the sense that they can move around inside the conductor easily, but it still requires energy to remove them from the metal (making them "free" in a more general sense). That energy is the "work function" you encounter in descriptions of the photoelectric effect.

The potential barrier is probably the biggest contributor to the non-flow of electricity through an open circuit.

To explain insulators in your example extend the metaphor to use cold molasses rather than water as the medium. If you are willing to wait for long enough the ball will still fall, but it will be painfully slow and you don't get appreciable useful work out of it.

Following discussions on dmckee's and Daniel's answers, here is my summary.

The electric potential in a solid metal is not 0 everywhere. It would be if electrons were localized exactly where the ion's nuclei are, so that the electric potential from electrons and the nuclei cancel exactly. However, quantum mechanics say that electrons have a wave-function that "spreads out" (delocalized). The electric potential that they create is somewhat wider than the nuclei's. The sum of both contributions, for one atom, might look like the following figure (that's a very crude and probably unrealistic view).

By the way, that allows the metals to bond together, the electrons providing the potential to attract the nearby nucleus.

If you sum these potentials from many of these atoms equally spaced, you may obtain the following potential.

Another example of such potential is depicted here. Electrons behave like waves in this potential and will bounce on each surface. That's why they do not escape easily the metal: they would have to overcome the potential wall at the metal surface. For this reason, electrons keep flowing in metallic wires.

Electrons do flow without a wire. This is exactly what is happening in a cathode ray tube. So why don't electrons flow from one conductor to another through vacuum or air if there is a potential difference? There is a minimum energy of a few eV required for an electron to exit a metal known as the work function. In a cathode ray tube this energy is minimized by selecting a material with low work function and by heating the anode.

Try to lookup conduction and valence bands. The theory explains in terms of energies why electricity flows. 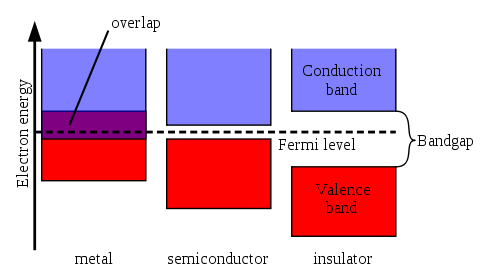 It is not like balls because electrons are bound by potential wells, which they have to climb out of for them to flow.

The answers posted by CIA and dmckee are great, and they correctly point out that textbooks usually handwave about why electrons don't easily leave the surface of conductors, but I would add that the electrons actually can move through the air, even if the electric field is not strong enough to ionize the air and form a plasma. Anyone who has tried doing quantitative electrostatics experiments knows this - put a static charge on a conductor open to the air and see how long it stays there. It depends on the material, but it's generally not that long, especially on a humid day. You usually need to keep a power supply hooked up if you want to keep a constant charge.

Also, leave a battery on the shelf long enough and you'll find that it has lost its charge. This is similar, though with ions doing the drifting rather than electrons and with the movement being through the internal insulating medium of the battery rather than through the air.

"If you define "electricity" as charge carriers in motion (which I think is reasonable), then you need free charge carriers" This @dmckee's logic seems somewhat restrictive, as it is not applicable without caveats to alternate current, which is probably the most widely used kind of electricity. You can use bound charges for alternate current. For example, alternate current can flow through capacitors. The OP asks: "why doesn't electricity flow without a good conductor?" I would say it does, for example, in circular dielectric waveguides, which are just dielectric rods. Fiber optics is an extreme example of such phenomena, and I don't think one can dispute that there are "charge carriers in motion" in fiber optics, although it does not have to use free charge carriers.

Succinctly: Electricity flow does happen easily in cathode rays in the famous vacuum tubes and cosmic rays flow nicely in outer space and ions flows readily in ionic solutions. So wires are not needed. The problem is to get charges into your space or air since electrons like to stay inside a material or metal as they are attracted to the positive lattice ions. Give them enough energy to get out (work function of photoelectric effect) and they will then readily accelerate and flow in whatever electric field or potential difference. There is an energy barrier to get them out. Even a charged up metal ball doesn’t throw off its excess charge in vacuum unless the charge is so high to create a large surface field to get electrons out of the metal. Heat or UV light can help jump the electrons out.

Not the answer you're looking for? Browse other questions tagged electromagnetism electricity electrons electric-current conductors or ask your own question.

4
Why do surfaces act like barriers for electrons?
3
Excess charge on an insulator and conductor

1
Flow of charges in two different materials
1
Some questions related to circuits and flow of electrons
0
Why does current have to flow in the same direction?
0
Mechanism of electricity in conductors
0
Why can't free electron flow in water to conduct electricity?
9
Does an electric current flow in an open circuit?
0
Does an open circuit have electrons accumulate in it?