Why do ice cubes stick together or to the edges of a drinking glass?

I was drinking iced-water from a drinking glass (made of glass) at a restaurant yesterday when I was taking a drink, I noticed that there is very little ice water coming out and then suddenly, the ice water mixture comes crashing down. With my open mouth overfilled with ice water, my shirt gets wet – I hate when this happens. After drying myself off, I started thinking why this does happen:

Once again, being at a restaurant with friends, I go to drink iced-water from a drinking glass again, and sure enough, this very thing happened again. Perturbed and determined to figure why ice fuses together like this, the experimentalists came out in me and I started pouring water into glasses full of ice when I got home. I believe that I have an answer to my own question.

Even though an ice water mixture maybe at 0℃, the temperature of the ice depends on how long the ice has been in the glass of water. If the ice has been in the water for some time, then the ice eventually will reach it maximum temperature of 0℃. However, ice fresh out the ice freezer, will be colder (FDA recommends -20℃) in the inside than the outside and this holds the key to why ice will fuse together in a glass of water.

Starting off with ice at -20℃ and pouring water into the drinking glass, the edges of the ice and water will be in thermal equilibrium at 0℃ after a short period of time. However, in order to freeze the water in-between the ice cubes, latent heat must be removed in order to freeze this very water. (Remember that latent heat of fusion is the required amount of heat that must be removed to change water into ice.) This is an image I created to show you what I am thinking here. 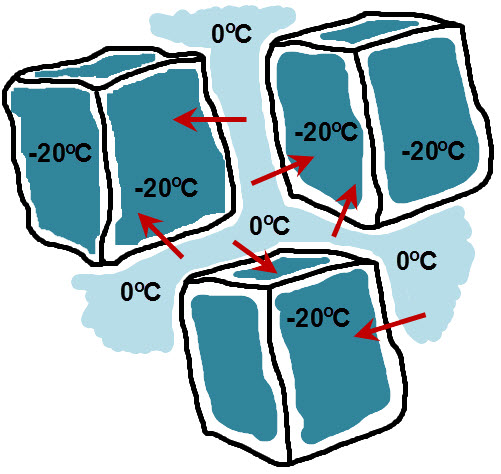 The dark blue regions indicate the colder -20℃ internal regions of the ice cubes whereas the light blue regions indicate the warmer 0℃ regions of the water as well as the edges of the ice cubes. The red arrows indicate the directions of the latent heat of fusion being removed from the water, and therefore, freezing the water in-between the ice cubes. I also see no reason why ice will not fuse to the sides of the glasses as well, using this same mechanism to remove the required latent heat. To test this, I poured water into glasses filled with fresh ice into several drinking glasses filled with water and was able to get the ice to fuse.

Starting with fresh ice again, I now constantly stirred the ice around so that I did not allow them to fuse together, and after about 10 minutes or so, I let the ice sit in the glass undisturbed. I found that the ice never fused together. This makes sense because I think that the ice is now at 0℃ throughout the whole ice cube. As a result, there is no way to remove the required latent heat to freeze the water in-between the ice cubes or the sides of the drinking glass.

3
Why do my ice cubes stick together?

10
Why do ice cubes come out easier from top trays?
4
Why do ice cubes make a cracking sound when placed in fizzy wine (Prosecco)?
7
Why does an ice cube not twirl along when twirling a drink glass?
10
Blender physics: Size of ice cubes affects crushing of nuts
4
Why do ice cubes shrink in the freezer?
0
Fastest way to melt ice cubes in glass of water
2
Why do gas bubbles stick to the surface of the bottle?
1
Why does the glass move?
28
Why do wet plates stick together with a relatively high force?