How many watts of light do instruments in modern telescopes need?

I just calculated that if the European extremely large telescope(978 m^2 area) would be pointed at the Andromeda galaxy once it is built, it will only get mere 1.2*10^-6 Watts of power from Andromeda.

And I didn't account for atmospheric factors or the fact that the telescope is only going to read visible and infra red light.

That is to me a really small number that we achieve even after using the highest aperture that would be available to us.

Are my calculations correct(I have double checked but I still really doubt it.)? I used the relation between intensity, luminosity and distance.

Please, I am just an amateur. If you guys find an embarrassing arithmetic mistake, let me know so.

If my calculations are correct, do the scientific instruments on say, Hubble work with such a small amount of light?

How many Watts of light does the Camera on these telescopes need to work properly?

However, a single photon is unlikely to provide you much useful information, considering that there is read noise (3.1 electrons per pixel) and dark current of 7 electrons per pixels per hour. The number of photons to get above the noise level depends on time of exposure and wavelength. Source: http://www.stsci.edu/hst/proposing/documents/primer/Ch_48.html 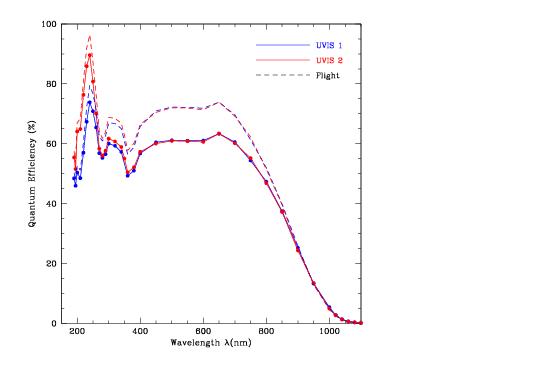 In the UV band:

Like the ACS HRC and STIS CCDs (and unlike WFPC2), the WFC3 UVIS CCDs are directly sensitive to UV photons. In silicon, photons of energy higher than 3.65 eV (i.e., wavelength shorter than ~340 nm) can produce multiple electron-hole pairs when the energetic conduction-band electron collides with other valence-band electrons. At higher energies (energy above 3.65 eV, or wavelength below ~340 nm) the incident photons can directly extract more than one electron from the valence band. This effect (called “quantum yield”) of a single photon producing more than one electron must be taken into account properly when estimating the noise level for short-wavelength observations.

Because the generation of multiple electrons is a random phenomenon, an extra noise term must be added to account for an observed variance larger than that associated with the normal Poisson distribution of incoming photons. The correction is theoretically about 1.7 e–/photon at 200 nm, decreasing linearly to 1.0 at 340 nm. Measurements of ground-based data, however, have indicated that the effect in the WFC3 chips is much less, 1.07 e–/photon at 218 nm and 1.03 e–/photon at 275 nm in broadband data (WFC3 ISR 2008-47) as well as monochromatic narrowband data (WFC3 ISR 2010-11). The cause for this is unclear, but may be due to charge sharing (Janesick, J.R., 2007, “Photon Transfer DM-->λ“, SPIE, Bellingham, Washington, p 45-48).

Given the low level of quantum yield measured in the WFC3 data, neither the QE curves presented in Figure 5.2 nor the WFC3 Exposure Time Calculator (ETC) include the effects of quantum yield. The noise distortion from multiple electrons is not large compared to other contributions to the signal-to-noise ratio in the ultraviolet.

The apparent brightness of Sirius is $10^{-7}$ watts/meter$^2$ (http://www.astronomy.ohio-state.edu/~ryden/ast162_2/notes7.html ), nevertheless we can see it by the unaided glass. I did not check your figures, but our eye, let alone telescopes, is a very sensitive instrument able to perceive less than a hundred photons (http://math.ucr.edu/home/baez/physics/Quantum/see_a_photon.html ), so Andromeda Galaxy can be seen by the unaided eye (http://en.wikipedia.org/wiki/Andromeda_Galaxy ), although its apparent brightness is indeed very low.

Not the answer you're looking for? Browse other questions tagged astronomy telescopes luminosity or ask your own question.

11
How do air Cherenkov telescopes work?
8
Could many widely separated space telescopes be combined for VLBI on IR/visible wavelengths?
6
Does the current light pollution set a fundamental limit for the range of Earth-based telescopes?
12
Why does a blue sky at dusk appear nearly black through a telescope?
15
Why don't the black holes appear black in color in images of galaxies taken from HST?
3
What is this big, white, dense, circular collection of stars in this picture taken from a Telescope? (See the image)
1
How do telescopes work as magnifiers?