Mushroom clouds are formed in explosions (not necessarily nuclear - see picture) as a result of the Rayleigh-Taylor instability. For given density contrast $\frac{\rho_{cold}-\rho_{hot}}{\rho_{cold}+\rho_{hot}}$ between the hot cloud and the cold atmosphere, the timescale $t_{RT}$ for this instability scales with the length scale $L_{RT}$ according to:

The 'mushroom' has disappeared before it really takes shape. Bottom line is that you need fairly large explosions to observe a mushroom. 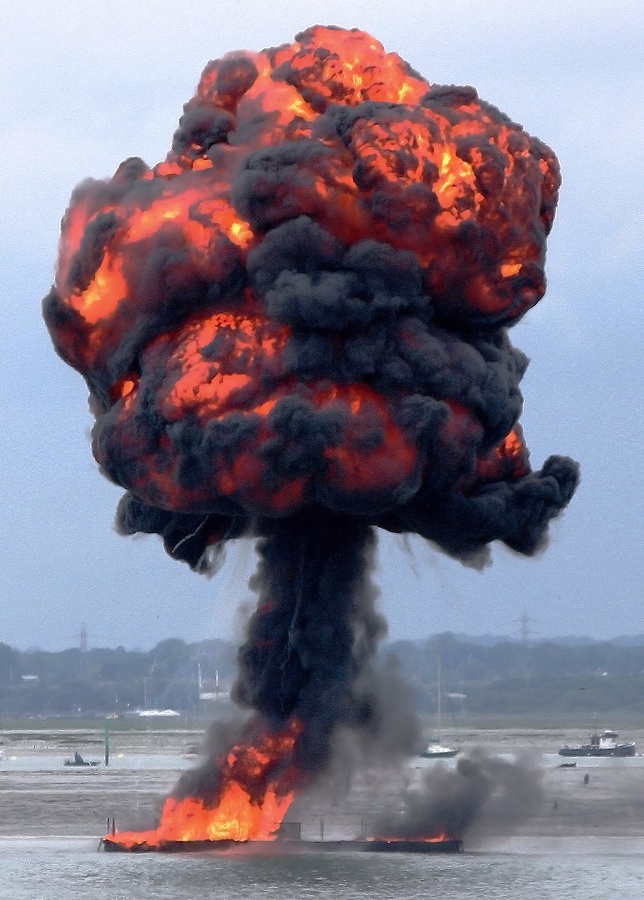 Let's try to answer your question in terms of fluid mechanics. A mushroom cloud is quite interesting, because of the very large scale phenomena, down to the vary small scales, which are called Kolmogorov microscales.

The mushroom cloud is quite complicated, as there are probably supersonic velocities, buoyancy effects and of course combustion playing important roles. Lets ignore all these effects, and assume ideal isotropic turbulence as a first order approximation.

The large scale we call $L$, and the small scale, the Kolmogorov scale $\eta$. Then we are interested in the fraction of these scales, as this is determines whether you'll qualify it as a mushroom or not.

$\eta$ can be approximated by

Here, $U$ is the large scale velocity. And thus

In addition it is worth to know that to make a nuclear explosion, you need enough fissile material. Sufficient mass is called "the critical mass".

As you can see here, you need at least about 15 kg of uranium. This costs a lot. Moreover you would need plenty of gear to initiate explosion (because you firstly have to assemble everything and then, using explosives rise the temperature to lower the critical mass parameter).

Such nuclear device would be bigger than explosion itself.

Not the answer you're looking for? Browse other questions tagged nuclear-physics explosions or ask your own question.