I would be interested in what people think of Fulvio Melia's argument for a linearly expanding Universe.

I realize that the experimental evidence seems to be pointing to an accelerating Universe but does Melia's argument have any merit?

The following is my own Newtonian argument for a linearly expanding universe (it is not Melia's argument). 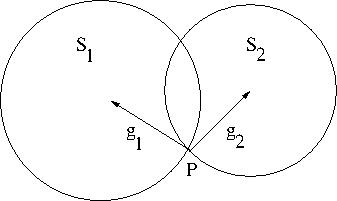 But point P is simultaneously on the surface of a sphere $S_2$ with mass $M_2$ and radius $R_2$. Therefore one can construct another argument, independently of the previous one, that there is an acceleration $g_2$ at point $P$ directed towards the center of sphere $S_2$ with magnitude:

However since the Universe is homogeneous and isotropic then, again in Newtonian terms, there should not be any net acceleration vector at any point.

How do we resolve this paradox?

Either the Universe is empty so that $g_1=g_2=M_1=M_2=0$ or General Relativity gives us another solution.

In GR pressure also has "weight" so that the gravitational acceleration $g$ at the surface of a uniform density sphere of mass $M$ and radius $R$ with density $\rho$ and internal pressure $p$ is given not by:

Thus, in order that the net acceleration at any point $P$ is zero, we must require the acceleration $g$ due to any particular sphere touching point $P$ to be zero. Thus we must have the equation of state:

with scale factor $a$, we find that $\ddot a=0$ so that $a(t)\sim t$ implying that the Universe can only be expanding linearly with time.

The article Melia 2012, linked to from the question, is a popularization. A more professional-level presentation of Melia's ideas is given here: http://arxiv.org/abs/1109.5189 . Neither of these appears to present the particular argument given in the question.

The question is in two parts.

(1) The first part of the question presents a paradox in Newtonian gravity. The resolution of the paradox is that solutions to the Poisson equation are only unique for certain specific types of boundary conditions, and those don't include the boundary conditions being discussed here. See this question for more discussion.

(2) The second part of the question includes some ingredients from GR but isn't a fully general-relativistic treatment. Its result is correct if stated as follows: cosmological expansion is linear if and only if the equation of state is $w=p/\rho=-1/3$, where $w$ represents an average over all sources including dark energy and the units are such that $c=1$. This follows directly from the Friedmann equations.

So this particular presentation isn't very compelling, since 1 is a mistake, and 2 is only of interest if 1 holds.

Melia 2011 points out two coincidences that hold only at the present time in our universe:

(b) The value of $w$ (averaged, as above, over all sources including dark energy) currently appears to be close to $-1/3$.

Melia appears to believe that these coincidences are a sign that Something is Terribly Wrong in the present state of cosmology, and that there must be some mysterious physical principle that makes $R_h=t$ identically for all times. This would require linear expansion and $w=-1/3$ for all times. This is pure kookery. As he himself admits in both Melia 2011 and Melia 2012, there are well-known and elementary physical reasons why $w$ must vary as the universe goes from radiation-dominated to matter-dominated to vacuum-dominated. Furthermore, there is empirical evidence that $w$ has varied this way, e.g., from big-bang nucleosynthesis.

There have been a couple of papers published that have debunked Melia's work: Lewis 2013 and Bilicki 2012.

Not the answer you're looking for? Browse other questions tagged general-relativity cosmology space-expansion or ask your own question.

14
Electric field near a conducting surface vs. sheet of charge
15
Infinite grid of planets with Newtonian gravity
19
Anti-gravity in an infinite lattice of point masses
4
Scale factor and age of the universe
2
Second law of thermodynamics implies a linear cosmology?
0
Friedmann vacuum solution linear rather than exponential?
0
What is the definition of gravitational horizon $R_h$ in the $R_h=ct $ universe?

3
Problem with convergent geodesics at 2D sphere
2
Second law of thermodynamics implies a linear cosmology?
0
Newtonian potential defines size of Universe?
4
Why is Newtonian cosmology correct for curved space?
0
What is the definition of gravitational horizon $R_h$ in the $R_h=ct $ universe?
1
Modification of Gravitational force's law and related problem
17
Ambiguity in applying Newton's shell theorem in an infinite homogeneous universe