In the famous Einstein's Photoelectric effect, why does the intensity of light not raise the kinetic energy of the emitted electrons?

The work function of any metal is no doubt constant for it is related to electromagnetic attraction between electrons and protons. However on increasing the intensity of any light source the kinetic energy of the emitting electrons must increase, mustn't it? Let us assume there is only 1 electron in a metal surface. Let hf be the energy required to expel it out with a velocity 'v'. Again let us increase the intensity of the source keeping frequency constant. Now ' hf ' will change to 'nhf' where n = no. of photons striking on electron at a same time. Since work function is constant the only variable must be 'v' letting it increase its K.E. This clearly shows Kinetic energy of emitting electrons is directly proportional to the intensity of light source. If kinetic energy depends upon the intensity, stopping potential for a particular frequency of light for a particular metal is a variable quantity. It is true that on increasing the intensity the no.of photo electrons will increase. But what if the no.of electrons in a metallic plate is constant. Suppose I have only two electrons in a metal, on increasing intensity i.e on increasing the no.of photons , the no.of photons colliding from different sides simultaneously may increase . So, K.E of emitted electron must increase on increasing intensity, mustn't it? But experimental data doesn't show this. What is wrong? Help me out

In general you're right - an electron being subject to interactions with more than a single photon may have a higher kinetic energy. However, in the vast majority of photoelectric setups you will observe that kinetic energy is independent of light's intensity.

The appropriate framework for this discussion is this of probability theory:

The usual answer to the above question is "negligible". This happens, but so rarely that the current due to these electrons is below your measurement error.

However, in high intensity experiments (where the number of photons per unit area per unit time is enormous), multi-interaction-electrons were observed. See this for example.

The best analogy I can think of is this of rain. You may think about individual photons as drops of rain, about individual electrons as people in the crowd (each of whom has an effective cross-section of interaction which depends on how fat the person is :)), and about the characteristic time as of time it takes to open an umbrella over the head.

Now, if the rain is weak (usually when it just starts), each person in the crowd is hit by a single first drop. He takes his umbrella out of his bag and opens it above his head. If he does this sufficiently fast (short characteristic time), he will not be hit by more drops.

However, there are cases when the rain has no "few drops per minute" phase - it almost instantly starts and is very intensive. In this case, no matter how fast the people open their umbrellas, they will be hit by many drops. 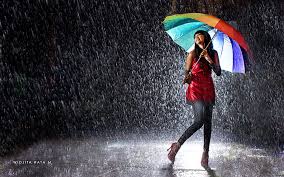 I just had an exam today with a similar question. I guess you think of light intensity as amount of power/sec hitting the metal. Thus if we increase the intensity (but keep the frequency of light constant), all we are doing is adding more photons with the same amount of energy. And the electrons by rule can only absorb all or none of the energy provided by a photon. Since the energy of a photon is given by E= hf = (work function) + (kinetic energy), we can see that the work function is constant and the energy of photon must also be constant, thus implying that the kinetic energy of the electron is constant even if intensity increases

The electron will not be at the same place to be hit by another photon if it has the necessary KE it will be off the metal . The probability of photons hitting the same electron is very less.

The photo-electric effect is a surface level phenomenon. At a micro level there is a 1:1 interaction of an electron and a photon. When you increase the intensity, you are increasing the number of impinging photons, which doesn't translate to more kinetic energy of the electron but it does translate to a higher number of 1:1 interactions.

So more electrons get ejected from the metal and hence there is more photo-electric current. Thus more intense light could produce more electric power but kinetic energy of electrons may be unaffected.

The metal plate which is a target of the photo-electric effect can be analyzed as a quantum-mechanical system of pure electron states called "eigenstates", where each state has a wave function which is the product of a spatial distribution and an exponential (ossillating) time distribution:

You can drive an electron from a bound state to a free state by applying an oscillating electromagnetic field whose frequency correspondents to the difference of the frequencies of the two states. This is the photo-electric effect. What happens is that an electron in the bound eigenstate finds itself slightly distributed towards the free state. This combination of states results in an oscillating charge distribution which interacts strongly with the applied e-m field in exactly the same way a radio antenna interacts with a broadcast wave. The result of this interaction is to drive the electron more strongly into the free state until it breaks free from the metal.

To truly understand the effect, you must understand how the superposition of two different electron states results in an oscillating charge distribution. Nobody, not even Einstein could understand this until Schroedinger wrote his famous equation in 1926. That is why Einstein came up with the wrong explanation for the photo-electric effect in 1905. The correct explanation is the one Schroedinger discovered in 1926, which I have reproduced here.

2
Does a single photon's energy depend on frequency? (photoelectric effect)
0
Relationship between intensity and electron emission from a metal?
0
Why do electrons eject only if the frequency of incident ray is greater than the threshold frequency?
0
Why photon-electron energy transfer can't occur in steps or does it?