How would we see a near-lightspeed object emitting light?

Consider an object travelling near the speed of light relative to us (let it be a spaceship or a star), which is emitting light (consider it monochromatic resulting from a two level electronic transition).

Regarding the different relative time in the object itself (since it's travelling at high speeds) and the time of an observer (say in Earth), what would happen to the number of photons that we would see emitted by that object, i.e. photons/second, as it increases speed ?

I believe that we would see that the object would be emitting less and less photons (per unit time) as its speed increases because the time for radiative recombination, i.e. the time required to produce a photon, would pass slower. Is this true?

If yes: It is possible that we may fail to detect matter when we look to the outer space and think that nothing is there? Relating the fact that no radiation detectable from that point and that the relativistic mass is especially high, could it, or why cannot, this be related to dark matter?

Although photons are weird, not having a fixed wavelength, but somehow a fixed speed, their existence is not relative. Every frame of reference should agree about the existence of a photon. Therefore we can calculate the number of photons transmitted simply by using time dilation.

If the laser emits $N$ photons in $t$ seconds according to his own clock, the observer will also see $N$ photons being emitted, but in $t'=\gamma t$ seconds. Therefore the number of photons emitted per second is decreased by a factor $\gamma$.

In addition to this, the emitted light will be less energetic to the observer because of the relativistic Doppler effect ($f_{obs}=\sqrt{\frac{1-v/c}{1+v/c}}f_{src}$). Therefore, the observed energy output will drop quickly.

If a photon source moves away from an observer at speed $v$ while sending out every second a photon of frequency $f$, at what rate would the observer see the photons coming in and what wavelength would they have?

First, forget about relativistic length contractions mentioned in some of the comments (the photon source being seen as shortened is not relevant) all that matters is the relativistic Doppler effect that answers both questions. The Doppler factor $\sqrt{\frac{c+v}{c-v}}$ gives the factor by which the photon wavelengths are observed to be increased, as well as the factor by which the time between subsequent observed photons is increased.

Yes, the rate at which we would receive photons from the emitter would slow down, and the photons be redshifted. No, this could not account for Dark Matter in the Universe.

If you think about relativistic Doppler shift of photons as a slowing down of frequency due to relativistic time dilation, rather than a change in wavelength, it is quite easy to see that the redshift of the photons and the slower rate at which they will be received by the observer is the exact same effect. 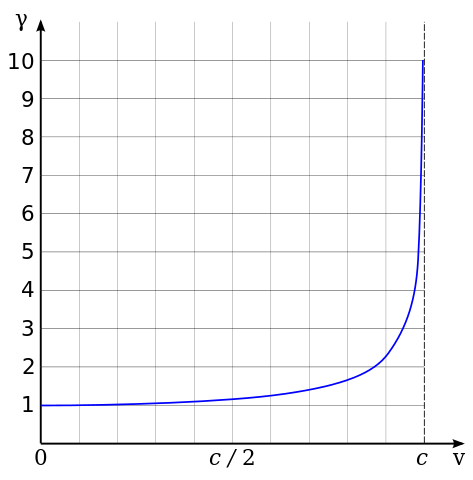 (The nice thing about $\gamma$ is that it is often just a multiplicative factor, so remembering its shape gives a good intuition for how many things in SR work.)

So, the time between two wave tops in a photon will be $\tau$ in the emitting frame, and $\gamma \tau$ in the observing frame, and looking at the figure we get a good grasp how that time - and thus the redshift of the photon - will develop as $v \rightarrow c$.

But the exact same effect will of course happen to the time span between the emission of two subsequent photons/light pulses, so yes, the frequency with which they arrive will approach zero as $v$ approaches $c$.

It is true that particles moving at relativistic speeds would have a larger mass than the same particles at rest relative to us. But we should remember that from symmetry arguments, there would be about as many emitting particles moving towards us as away from us at those speeds. Particles approaching us at relativistic speed will blueshift their photons emitted in our direction (remember that $v$ is negative at motion towards us and thus $\gamma$ gets smaller with higher speed of approaching), and so we would definitely observe if there was a lot of matter moving at relativistic speeds around us. There is of course the cosmologically redshifted photons emitted from distant parts of the Universe that are receding from us due to cosmic expansion, but the redshift is gradual as a function of distance (and we should also remember that SR does not apply on these scales).

Another problem with the Dark Matter scenario is that we can observe the effects of Dark Matter everywhere, even where we still observe lots of ordinary, luminous matter, e.g. in the halos of nearby galaxies. These haloes are making up the bulk ($\sim 90\%$) of the galactic mass, and can definitely not be receding from us at relativistic speed, without taking the luminous matter of the galaxy with it, which we can easily observe that it doesn't. Similarly, if we look at e.g. the Bullet Cluster, we can observe that Dark Matter also on a larger scale is holding together systems of luminous matter which are definitely not receding from us at anything resembling light speed.

Let us imagine that we are in a one-dimensional world. There is an object moving away from the observer with velocity $v>0$. This object emits, in its reference frame, $n_1$ photons per second, of frequency $\nu_1$ during a time $t_1$.

So for velocities $v$ approaching $c$, the power will be quite small. This makes the detection of dark matter even more difficult. If there is such dark matter, anyway, its emission power is expected to be very small, the fact that we observe only a fraction $1-\beta$ of this power is not the biggest issue. Dark matter has, by definition, a small emission power which is a stronger obstacle for its observability.

Not the answer you're looking for? Browse other questions tagged special-relativity cosmology astronomy astrophysics space-travel or ask your own question.

15
How is it possible for astronomers to see something 13B light years away?
4
Quantum Mechanical Effects of an object accelerating near speed of light $c$?
4
Explain relationship between angular diameter distance and luminosity distance, Etherington Theorem
2
Does a spaceship travelling at near lightspeed see the universe aging slow or fast?
1
How does emitting light while moving not break the law of conservation of energy?
2
How the Earth observer would see (time-ticks wise) a traveller rushing away or towards Earth at near-light speed?
0
Confusion over Special Relativity - Time and Length