Why does the wind direction vary locally?

If the air is flowing with the earth, as it rotates, how do we feel a breeze and strong winds at times, as everyone has experienced, the wind shifts as if from many directions.

I may be misreading the question, but I think you're asking about meterolgy and how wind is formed in the earth's atmosphere?

If you're talking about wind you usually feel that is due to the motion of air around systems of high and low pressure. These pressure differences are formed by variations in temperature and weather, and the gradient between them helps to determine the strength of the wind felt.

This may be a simple view where there is just one area of high pressure and one of low pressure. If I read the second part correctly that is to do with the increased complexity of the atmosphere and pressure systems where you experience a less obvious wind direction. It's possible for the wind to move in all directions including downwards based on where the air is being pulled towards. It may be to do with interference as well such as the wind hitting buildings or other objects that will cause changes in the air patterns around them, there may also be more local heating effects that cause pressure variations leading to more complex air flows. In a large, open, area the wind will be more-or-less in one direction. An example would be on a ship at sea where from personal experience the wind comes from a specific direction. Compare that to a city where the wind deflecting off buildings will cause all sorts of local 'winds', though the overall propagation would be towards the global low perssure.

On a larger scale the rotation of the earth and heating by the sun is what drives the most high-level air currents. There is a pattern of these currents that is fairly well established from when ships used the wind for power. The effect of the earth on the wind is observed as the windspeeds are far higher in the upper atmosphere with thinner air and less interference from the ground (when very close).

Two words: turbulence & thermals. The wind you feel on the surface of the earth is subject to a lot of friction from the ground. The NOAA wind models running 24/7 on supercomputers don't even try to predict wind less than 10m from the surface. That interface between the free flowing fluid of the sky and the static chaotic surface of the earth is very non-linear and no one even tries to model it on a global scale.

Just like when you walk behind a fence the wind dies or maybe even reverses, the land causes strange things to happen to the wind (modeled as a fluid) flowing over the surface. This can happen on big scales where the turbulence caused by the fence can be felt and measured 200 to 300 feet away. It is a very common rule of thumb with racing sailboats to try to slow other boats by giving them "dirty air" by disturbing the airflow up wind of them.

On a larger scale the heating and cooling of the earth drives the winds much harder than the earths rotation. This happens in several different bands of the atmosphere and you can see the general summary of the the wind sources in different parts of the world in this diagram. 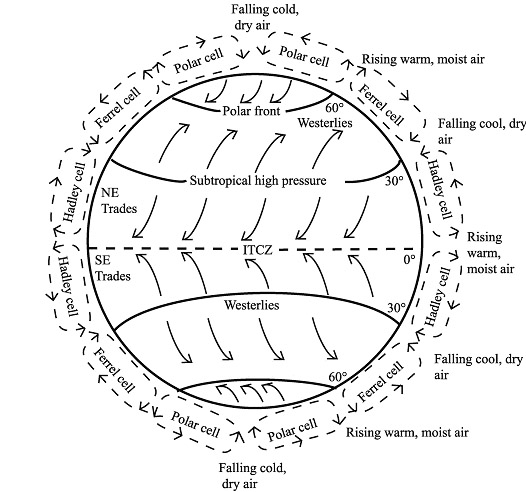 If the earth didn't rotate you would see this winds just circulate from N to South straight up and down. However the rotation of the planet causes the the slight shifts (called the Coriolis effect) depending on whether the wind is descending (cooling down) from the upper atmosphere or ascending (heating up). The surface winds are shown drawn on the planet, but note those circular rings of rising and falling air are really 3-d and surround the globe. Hopefully this will help you visualize how the winds are driven around the planet.

The High and Low-pressure systems (mentioned by Folau) form due to downward (High) or upward (Low) motion through the troposphere, the atmospheric layer where weather occurs. Take a close look the Hadley cell from the previous picture.

As the hot air rises it cools, losing moisture; it is then transported poleward where it descends, creating the high-pressure area. This is part of the Hadley cell circulation and is known as the subtropical ridge or subtropical high, and is strongest in the summer months.

All said and done the heating/cooling and turbulence makes it very difficult to predict local winds very accurately. However the trends, average strengths and general directions have radically improved with NOAA's improved models and larger supercomputers over the last 15 years.

In fact NOAA is getting a big upgrade -- doubling their computation power so maybe things will get more and more predictable...?

To see how wind can vary locally we must first look at the basic principles of how wind is formed.

How is wind formed

Without going into too much depth, wind is air flowing from an area of high pressure to low pressure. As air heats it rises creating areas of low pressure.

The shape of different materials and surfaces also has an impact on how they absorb heat.

The Sun is the main source of heat, so we must also consider how much of a surface is in shade. So cloud coverage and landscape can have a huge impact on how wind is formed

Buildings can also have an impact on how local winds behave particularly in more built up areas like a city.

These are what cause differences in direction of winds locally. Of course winds change globally too and there are many factors for that like sea coverage, the Coriolis effect and how the sun's light is more intense at the equator.

I hope I provided you with a simple answer to your question.

Not the answer you're looking for? Browse other questions tagged geophysics atmospheric-science meteorology or ask your own question.

0
How does atmospheric pressure work?

21
Are the air particles in today's wind on earth (more or less) the same as the air 2/3 billion years ago?
1
What is the height of breeze/wind?
4
How much atmospheric pressure (CO2) is required to carry iron oxide dust in the wind?
1
Does aeroplane moving against Earth's rotation cause relative wind (assuming otherwise a quiet weather outside)?
6
Why does fog float?
2
Heating up the atmosphere of Mars
5
Do in our atmosphere at least two positions exist where there is no wind?
0
Inertial reference frames in an atmospheric science context
0
Does warm air on a macroscopic scale tend to produce more wind (turbulence)?