Why is the Higgs boson created so infrequently at the CERN collider?

Although each collision at CERN has the available energy to create a Higgs boson each time, the vast majority of the time it does not create one. I suspect that part of the reason for this is that most of the energy goes into creating mostly lighter, secondary particles which carry a lot of kinetic energy away. As a result, this would leave very little energy left to create more massive Higgs bosons.

So I started thinking and realized that there is more that is going on (e.g. cross sections sizes). I have purposely left this question open-ended to just see what people are thinking since I know very little about this. Therefore, as the title of this question puts it: why is the Higgs boson not created more frequently at the CERN collider?

Aside: I guess I could of asked this question about some X-particle instead of the Higgs boson. Either way, my question would still be the same.

The Standard Model predicts that Higgs Bosons could be formed in a number of ways but the probability of producing a Higgs boson in any collision is always expected to be very small. If you make some assumptions you can estimate the rate. So based on the production rate at the LHC operating at 7 TeV. The total cross-section for producing a Higgs boson at the LHC is about 10 picobarn, while the total cross-section for a proton–proton collision is 110 millibarn. This would make only 1 Higgs boson per 10 billion collisions in the Large Hadron Collider. The rest is background. Even after CERN does its best analysis of a specific collision, they might decide that there was a 10% chance of it actually being a Higgs boson.

The key to discovery is collecting enough data so that there are many collisions each with a small probability of having a Higgs boson in them. Then using a statistical analysis, CERN can determine the presence of the Higgs boson.

In addition to the other answers, note that the nominal collision energy is reached only in a minority of collisions, as the two protons will have to bump really head-on; most of the time the collision happens between "sea quarks" which carry a lesser fraction of the energy.

One thing that some the answers indicate, but not explicitly is the fact that protons are composite particles, and the energy scale of the LHC (7 TeV) corresponds to a length scale much smaller than a proton (200 MeV).

The simplest view of a proton is 1.7 fm (diameter) bag with 3 non-interacting quarks trapped inside. Upon closer inspection, you can add sea-quarks and gluons. Collectively, these things are called partons. There is a kinematic variable called Bjorken-$x$, which can be interpreted as the fraction of the proton's momentum carried by a parton. 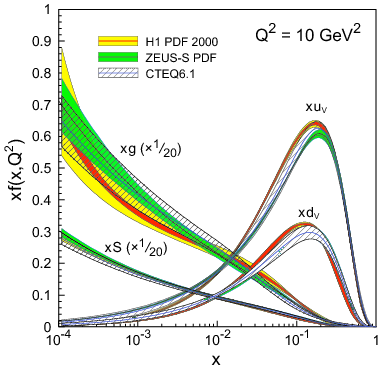 So when you collide two 7 TeV protons, you can think of it as colliding 2 bags of partons with momentum distributed accordingly: most of the partons are "soft" (at small $x$); moreover, the point particle cross section falls with increasing energy, so that low energy collisions dominate.

Very few collisions extract both partons from the $x \rightarrow 1$ part of the distribution, where you get to use the full beam energy, and even fewer of those are hard. This is why people want to build a next-generation $e^+e^-$ collider, where each collision is at the full beam energy and the incoming particle energies are know (very well), a priori.

The probability of producing a specific X particle in a p p collision can be computed mathematically. It is strongly dependent on the coupling constants ( the strength of the interaction), the possible decay products of each specific production and the conservation/accounting of quantum numbers. A proton proton collision is three quarks on three quarks the energy of the production gets lower because the calculations start with (q q) (q g) and gg scattering . The probability is low because the most probable thing to happen in such a scatter is a strong interaction decaying through the strong interaction creating more quarks and gluons.

To go a bit more in the details look at how the Higgs production crossection is expected to go in the Standard Model, for the strongest interaction, that of glue glue.

at lowest order, assuming the Standard Model.This lowest order process proceeds through a top quark loop between the gluons and the Higgs particle.

Although in principle all quarks should be included in the loop, in practice the restriction to just the top quark suffices because the Higgs couples about 35 times more strongly to the top quark then to the next heaviest fermion, the bottom quark, leasing to a relative suppression of the bottom contribution by a factor of 35.

Not the answer you're looking for? Browse other questions tagged particle-physics large-hadron-collider higgs or ask your own question.