How to think of Lagrangians? [duplicate]

I am struggling to come up with the "right" way to think of Lagrangians. For example, in Hamiltonian mechanics the Hamiltonian is simply the total energy of the system. In classical mechanics, taking $$L = T - V$$ as the Lagrangian is intuitive, as it measures the amount of "active motion" in the system. However, in the general case where there is no standard Lagrangian, what is the right way to think of it? Is the idea of measuring "active motion" still the right picture to have?

The Lagrangian is a function that yields the correct equations of motion (EoM) through Euler-Lagrange equations (EL), that is how you should see it. In Classical Mechanics a possible form for the Lagrangian is $$L=T-U\tag{1}$$ Where $T$ is the kinetic energy and $U$ a (generalized, i.e. velocity dependent) potential. That's not the whole story, though. Any other function yielding the correct EoM can be regarded as a Lagrangian (see this example by Qmechanic). Of course it is more reasonable to use the Lagrangian $(1)$ for all purposes but keep in mind that as long as it gives the correct EoM, any function can be a Lagrangian.

In fact, this can be better understood if you think that lagrangians are built using the EoM as the starting point. The Lagrangian $(1)$ has such form because it is the (simplest) function yielding Newton's second law, i.e. the EoM in classical mechanics. The Lagrangian $$L=T-e\varphi+\frac{e}{c}A_i\dot{q}^i\tag{2}$$ where $\varphi$ and $\vec{A}$ are the scalar and the vector potential, yields the Lorentz equations for a charged particle in a EM field i.e. it is the Lagrangian of such system. Things get even more evident in the framework of field theory, consider e.g. the Lagrangian (density) of electromagnetic field $$\mathcal{L}=-\frac{1}{16\pi}F_{\mu\nu}F^{\mu\nu}-J_{\mu} A^{\mu}.$$ This should provide enough motivation to consider the Lagrangian "just" the function the gives the correct EoM.

However, in the general case where there is no standard Lagrangian, what is the right way to think of it?

In non-relativistic classical mechanics the Lagrangian is always: $$ L=T-V\;,\tag 1 $$ where $T$ is the kinetic energy and $V$ is the potential energy (or "generalized potential" if it is velocity dependent as well). (Also, I suppose I should really be saying "a Lagrangian" rather than "the Lagrangian," since we can always add a total time derivative to the definition of the Lagrangian and the equations of motions will remain the same.)

Not sure what this means. If you can cite the source that might be helpful. I can try to make sense of this, but I'm not sure what you really mean... For example, the Hamiltonian is often introduced when the system is time-translation invariant, and this introduction can be seen as a special case of Noether's theorem (w.r.t variation in the time parameter). But not sure what you mean by introducing the Lagrangian itself (not the Hamiltonian) via Noether's theorem. Are you quite sure about what the source "claimed"?

As pointed out in the linked answer, the form of the Lagrangian changes if we need to account for relativistic kinematics.

However, if we ignore Lorentz invariance and want to make a connection to non-relativistic classical mechanics, we can add a constant $mc^2$ to the Lagrangian $L_0$ and see that: $$ mc^2 + L_0 = T/\gamma\;, $$ where $T = (\gamma - 1)mc^2$ reduces to the non-relativistic kinetic energy in the limit that the velocity is much less than the speed of light.

On how to think of Lagrangians:

As a starting point I recommend the following discussion: Geometric derivation of the Euler-Lagrange equation by Preetum Nakkiran


At this point I want to discuss what is is about a differential equation that makes it such a powerful instrument.

Summerizing:
In theory of motion: the solution of a differential equation is a function that describes a trajectory.


For his discussion of the Euler-Lagrange equation Preetum Nakkiran uses a case in Statics as motivating example: the Catenary.

The following reasoning has been independently rediscovered several times. (The first to recognize it was Jacob Bernoulli, in the 1690's. I will get back to that at the end of this answer.)

Take the catenary. Divide it in subsections. Each subsection is in itself an instance of the Catenary problem. You can solve each instance, and concatenate the instances.

There is no lower bound on how far you can subdivide; the logic remains the same. You can subdivide down to infinitismally small subsections, concatenating the results back to the entire length.

This reasoning informs us that it should be possible to derive the Euler-Lagrange equation using differential operations only.

That is what Preetum Nakkiran demonstrates: a derivation of the Euler-Lagrange equation that uses differential operations only.

The differential equation is suffcient: the solution of it is a function that describes the shape of the catenary.


Calculus of Variations in Dynamics

The same reasoning applies in the case of using Calculus of Variations in theory of motion; dynamics.

To verify: take the derivative of kinetic energy with respect to position coordinate

Lagrangians other than in classical mechanics

The Brachistochrone problem had been presented as a challenge by Johann Bernoulli (younger brother of Jacob Bernoulli).

Jacob Bernoulli was among the few mathematicians who were able to figure out that the cycloid curve is the Brachistochrone.

Jacob Bernoulli noticed a property of the Brachistochrone problem that offered a pathway to solving it. He presented that observation in the form of a Lemma: 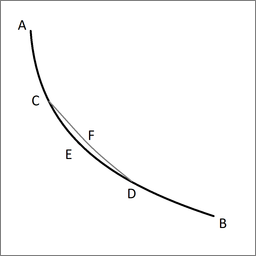 Lemma. Let ACEDB be the desired curve along which a heavy point falls from A to B in the shortest time, and let C and D be two points on it as close together as we like. Then the segment of arc CED is among all segments of arc with C and D as end points the segment that a heavy point falling from A traverses in the shortest time. Indeed, if another segment of arc CFD were traversed in a shorter time, then the point would move along AGFDB in a shorter time than along ACEDB, which is contrary to our supposition.

81
What are examples of Lagrangians that not of the form $T-U$?
39
What is the physical meaning of the action in Lagrangian mechanics?
50
The meaning of action
17
What does a Lagrangian of the form $L=m^2\dot x^4 +U(x)\dot x^2 -W(x)$ represent?
4
Example in motivation for Lagrangian formalism

61
Why not use the Lagrangian, instead of the Hamiltonian, in nonrelativistic QM?
4
Why do such different Lagrangians give the same Euler-Lagrange equations?
20
In what sense (if any) is Action a physical observable?
6
Why are Lagrangians linear in $\dot{q}$ so ubiquitous? Gauge theory, Berry phase, Dirac Equation, and more
4
Riemannian Manifolds and "Natural" Lagrangians
1
How to show the equivalence between Lagrangians?