AC compressor adds less heat than is removed during condensation?

The compression phase in an air conditioner is approximately adiabatic, so that heat is added to the refrigerant. It then naturally transfers heat to the outside. My question is: since heat was added both during the evaporation phase (from inside the house) and during compression, why should we expect that more heat is lost during condensation than was added by compression?

Secondarily, it seems that in refrigerators, the compression phase turns the gas to a liquid. I assume that air conditioners generally do the same, but then calling the next phase "condensation" doesn't make a lot of sense (since it's already a liquid). What gives?

So it seems that sometimes condensation happens before the "condenser" stage (4).

Question 1: Work is done on the refrigerant to increase its pressure enough to condense against ambient air. This work does have to exit the system as heat, but the amount of heat added by compression work is not going to be as much as the amount of heat absorbed by boiling refrigerant inside the evaporator, as this would lead to a VERY low efficiency for the refrigeration system. This can be verified by looking at the coefficient of performance for the particular system that you are dealing with, as shown here.

Question 2: the compressor increases the pressure of the refrigerant enough to allow it to condense at ambient conditions, but compression alone does NOT condense the refrigerant. The high pressure and high temperature refrigerant turns into liquid at the condenser as it releases heat to the environment.

AC compressor adds less heat than is removed during condensation?

The compressor in a refrigeration cycle does not add heat to the refrigerant. Heat is energy transfer due solely to temperature difference.

The compressor adds energy to the refrigerant by means of work, taking low pressure saturated vapor from the evaporator and delivering high pressure superheated vapor to the condenser.

My question is: since heat was added both during the evaporation phase (from inside the house) and during compression, why should we expect that more heat is lost during condensation than was added by compression?

Overall, the stages are

You may find the following article helpful: https://en.wikipedia.org/wiki/Heat_pump_and_refrigeration_cycle

I think I still have some confusion. I understand that heat can be transferred, but can't one also speak of the amount of heat (thermal energy) in a system?

No you can't think about the amount of heat in a system. Heat is strictly energy transfer due to temperature difference. Things don't "contain" heat. The energy contained in the system is properly called the internal energy of the system, which is the sum of the kinetic and potential energies at the atomic and molecular level.

The term "thermal energy" is often used as synonymously with the kinetic energy component of internal energy, but it is often frowned upon because of being confused with temperature and heat.

And if something causes that to grow through work, then although it hasn't "transferred heat," is it not appropriate to say that heat was added in the process?

Apart from that, hopefully the rest of my question makes sense.

I will have to reread it since it appears you edited it after I posted my answer.

This will address your edit and the related link.

This is at best, sloppy thermodynamics wording and at worst downright wrong. Get yourself a better reference.

Secondly, the compressor does not turn the gas "back into a liquid". It takes saturated vapor at the output of the evaporator and raises its temperature and pressure to create superheated vapor for the input to the condenser. See process 1-2 for an ideal (isentropic) compressor in the diagram below taken from the Wikipedia link above. If you Google "Temperature-entropy diagram for refrigeration cycle" to find a multitude of similar diagrams. Nowhere will you see the output of the compressor being a liquid. 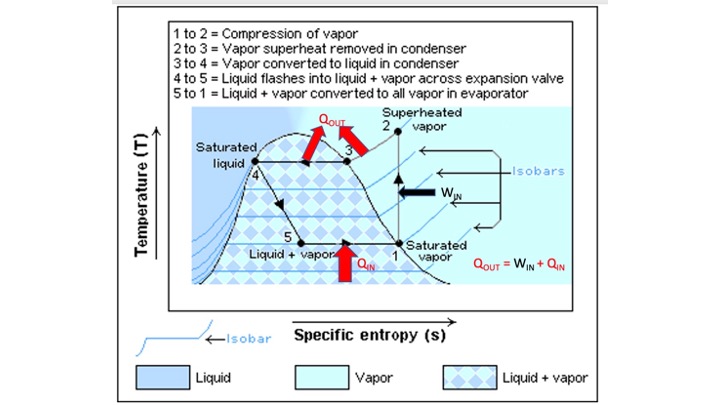 0
Air conditioners and the law of conservation of energy?
2
Why is the outside run of high presure line on a ductless mini-split airconditioner insulated?
1
Heat loss during evaporation of a liquid boiling due to Bernoulli effect
1
Why does the refrigerant release heat when it is compressed into a liquid?
4
How does an air conditioner work?
0
Meaning of *provided power* for working fluid in a heat pump cycle
0
Why don't we circulate system air to compressor for cooling?