What is photon spin and polarization?

I have literally googled for hours on this subject. I am very curious on what spin really is and how polarization works for photons.

I’ve read that photons have a spin of 1(no idea what that means or how an electron can have a 1/2 spin…).

I’ve read that linear polarization is horizontal or vertical, but can’t it be at any angle? The electric field could oscillate an any angle can’t it?

Also, I’ve read that linear polarization requires at least two photons with opposite spins, I don’t know if that’s true or not. Is circular polarization even real or is it made of a bunch of out of phase linearly-polarized photons that make it appear to spin on a graph?

In short: I’m not smart and I’m finding so many complicated and conflicting answers online. I’ve also had someone tell me that a photon doesn’t have an electric field and magnetic field, even though my research shows the complete opposite.

Please help me to understand. Please treat me like Homer Simpson or Peter griffin :) Explain it as you would to him.

Thank you so much.

I’ve read that photons have a spin of 1(no idea what that means or how an electron can have a 1/2 spin…).

There is no easy way to explain this one. The spin expresses several things, but one is a limit on the maximum angular momentum that a plane wave can have. The limit can be zero (no angular momentum, spin-0), or half the energy divided by the wavelength (spin ½), or the energy divided by the wavelength (spin 1), etc., and for subtle reasons, intermediate ratios aren't possible. This property of waves is not quantum-mechanical, though people sometimes say it is. See this answer which is somewhat technical (undergraduate-physics-major level).

When you add quantum mechanics, you get particle-like behavior of the field, and each particle carries a certain amount of the angular momentum.

I’ve read that linear polarization is horizontal or vertical, but can’t it be at any angle?

Yes, it can be at any angle. There are also elliptical polarizations, which are intermediate between linear and circular, and can also be tilted at any angle.

and if you add them out of phase by a different amount, you get an elliptical polarization.

That's wrong. A single photon can be linearly or elliptically polarized.

Photons are the electromagnetic field. They don't have a field in the way that, say, electrons do. Field lines don't end on photons. The photons just are the field.

Regarding spin, nothing is spinning at the photon level. (You can have apparent rotating electric and magnetic fields when discussing polarization of classical waves, but we're not doing that).

which is a vector, and we can talk about which way it points, not which way something spins.

we can't know them both at the same time. That affects:

(here $\vec L$ is orbital angular momentum, but it holds for spin too).

The commutation relations are:

That's right, the cross product of a vector with itself is not zero.

That means we're only able to know the projection of the angular momentum onto a single axis. For general spin-1 particles or orbital states, we choose to call that axis $z$ so that the possible states look like: 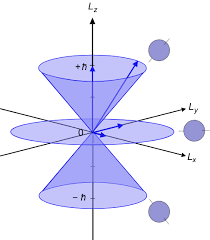 The magnitude of the angular momentum is

and the projection onto $z$ is

In a lot of discussions, where we say "spin-1", it's important to remember that that is the projection onto an axis that is quantized, and the total spin itself if $\sqrt 2$, relative to $\hbar$.

For the photon, $s=1$, and $s_z$ cannot be zero (because of gauge invariance), so you can substitute:

Now once you have a two state system, all possible pure (mixed) states can be described as by point on (in) the Bloch Sphere. It could be a two level atomic system, or a spin 1/2 particle, or photon polarization. They all have the same allowed mathematical mixtures, it's just that the physical interpretation depends on the underlying system.

For example, for the spin 1/2 particle, and pure superposition of up and down lies on the Block sphere, and represents a spin eigenstate along a different axis.

Meanwhile, transverse polarizations of the photon are not possible, and the superpositions of $|R\rangle$ and $|L\rangle$ do not allow a spin pointing in any direction. Rather, see the left figure:

The poles are the helicity eigenstates. Note that the states on the equator, such as:

are linearly polarized (Here, horizontal and vertical...which are orthogonal).

Linear polarization is a tensor polarization. It does not define an axis, it defines an alignment, which is a line without a preferred direction, and that requires 180 degrees of support to cover all directions, err, alignments.

Now you don't need two photons to make linear polarization, but it is the superposition of two circular basis states. Nevertheless, the basis is arbitrary, as long as it is made of 2 antipodal points on the Bloch sphere, it's orthonormal and complete.

Finally, all the allowed complex linear combinations of the basis states make up circular, linear and elliptical polarizations, lying on the surface of the sphere.

Inside the sphere are mixed states (e.g., density matrices), with the center being totally unpolarized.

Finally: note that the Bloch sphere for light polarization is called the Poincare sphere.

The previous answers do not make clear how the concept of spin arose at the quantum mechanical level of particles molecules and lattices.

When experiments in the small dimensions showed that the atoms of Democritus were not following the rules of classical mechanics and classical electrodynamics the theory of quantum mechanics was developed to fit and be predictive of new data.For the smooth continuity of the mathematics between classical and quantum theories it was necessary that the conservation laws holding classically would be imposed on the mathematics of quantum theory .

So spins are the outcome of experiments, they came up quantized and the value of 1 or 1/2 to the particles are imposed in the theory in order for angular momentum conservation to hold at the quantum level.

See this wiki article for light, to see the complexity.

11
Is photon spin and polarization the same thing?
8
Why is Spin Less Classical than Position?

14
If photons carry 1 spin unit, why does visible light seem to have no angular momentum?
4
Spin zero photons
0
Why do we say that photons have spin 1 comparing with the fermoins?
2
Photon spins from Radio Antennas
1
The spin of light
1
Photon nonzero Spin (Helicity?)
5
Spin-1 polarization vectors (massive particle)
2
Can a single photon have circular polarization?
0
Where did I go wrong with quantum photon polarization?