If there is no collapse of the wave-function does this mean that the many worlds interpretation of QM must be wrong?

If as some people suggest, there is no collapse of the wave function (is there a standard name for this position), then must one rule out the many-worlds interpretation of QM?

The term "collapse of the wave function" is impressive but carries little mathematical meaning other than labeling a specific measurement with it.

At the quantum mechanical level everything is described by the probability of manifesting a real valued measurement at a specific (x,y,z,t) with specific energy momentum and quantum numbers. All these are proscribed by a mathematical formula, called a wavefunction, which is a solution of a specific to the problem potential, in a quantum mechanical differential equation describing the physical status.The square of the wave function gives the probability distribution.

In a similar way the "collapse" means that the probability is 1 after the measurement that the particle was in that specific (x,y,z,t) etc and a new probability distribution has to apply to a new situation from a new wave function. The old wave function still mathematically exists, but is irrelevant to the evolution of the situation.

EDIT: The people who are saying there is no collapse are saying what I am discussing above, that collapse is a semantic for describing probability distributions and their use in measurements in the microcosm. It is the Copenhagen interpretation.

Saying :it collapses to a single eigenstate, presupposes a superposition of several eigenstates, so that when one specific Energy/momentum and quantum numbers state is found a single eigenstate has been defined. That does not mean that the mathematical form of the original superposed wave function is defunct, it is always there, it just becomes irrelevant for the future of the specific problem. It will apply for other experiments. A probability distribution applies for innumerable experiments. The "collapse" picks up one probability value from the initial wave function which since the measurement exists, is 1. The final wave function will be different because the problem has changed.

Take this simple elementary particle interaction in a bubble chamber 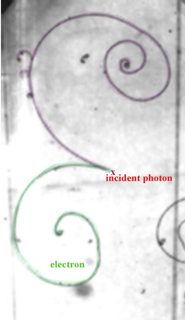 Part of a bubble chamber picture (Fermilab'15 foot Bubble Chamber', found at the University of Birmingham). The curly line which turns to the left is an electron. Positron looks similar but turn to the right The magnetic field is perpendicular to the picture plane.

A photon is coming in on the right hits the field of nucleus : there is a specific wave function that gives the probable course of this photon when it meets the electric field of the nucleus. In this measurement it creates an electron positron pair. In this measurement the probability of an electron positron pair to exist is one, whereas it was very small according to the wave function, which still exists and holds for the innumerable photons coming down the pipe. After the materialization a completely new wave function is needed to describe what the nucleus, the electron and the positron are doing quantum mechanically.

The many worlds interpretation would posit that all the probable outcomes of this simple interaction of a single photon with a nucleus exist in other worlds. Disregarding the enormous complexity of such a proposal if one expects all those worlds to be real , it is not different from saying that the mathematical wave function exists, giving all the possible/probable paths/measurements.

Not the answer you're looking for? Browse other questions tagged quantum-mechanics quantum-interpretations measurement-problem wavefunction-collapse decoherence or ask your own question.

6
What happens after the collapse of a wavefunction?