What does string theory say about the metric expansion?

Specifically, what happens to those small intertwined hidden dimensions? Do those expand too?

where dot means time derivative and H is the Hubble constant, the universe not just linearily expanding but the expansion is accelerated (or exponantial) which is called inflation.

In string theory, there are small extra dimensions and it is therefore natural in string cosmology to correspondingly relax the condition of isotropy and treat the (compactified) extra dimensions different from the large macroscopic dimensions.

which can be shown to boil down to the fact that not all exponents can have the same sign and therefore there have to be contracting and expanding directions present at the same time.

Also in string theory, the extent of the size of the (extra) dimensions is described by dilaton fields ;-) $\phi$ and they are related to the Kasner exponents in Models making use of the Kasner metric for example by

This introduces some kind of duality between expanding and contracting dimensions, such that something like a cyclic pre big bang cosmology can be described in this model in the following way: 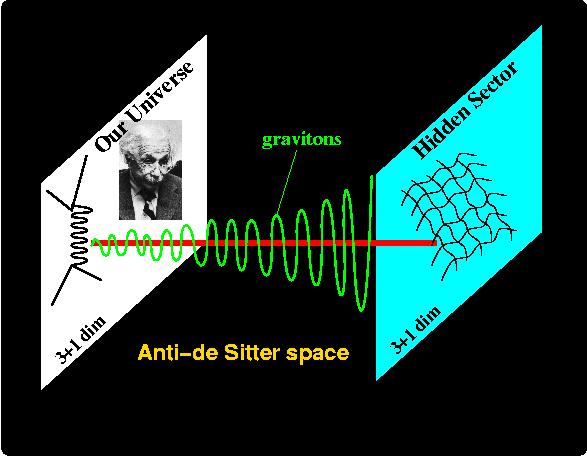 which describe our universe as a 3-brane connected by an extra dimension to an analog 3-brane called the hidden sector. In their "stationary form" where the branes dont move, these models give among other things an approach to solve the hieararchy problem in particular when warped dimensions are allowed for as for example nicely explained here. In cosmological applications, the branes are allowd to move along the extra dimension, such that cyclic ekpyrotic models are obtained where the universe always existed and the big bang is not the origin of time:

This cycle of events can take place repeatedly. In these cosmological models, the isotropy can be explained by the fact that the two (parallel) branes collide roughly like two plates evetywhere at the same time, the initial state is empty and therefore flat, and brane ripples (oscillations of the branes in the extra direction) provide seeds for the large structures of the universe.

The extra dimensions in string theory have always been assumed to be curled up on a scale equal to the Planck length, simply because there is no other natural scale for them. If they had been curled up on that scale at the time when the temperature was the Planck temperature, and then expanded since then at the same rate as the ordinary 3+1 dimensions, then they'd be big enough now to be easily observable.

Furthermore, I assume that the masses of fundamental particles in string theory is closely related, via the de Broglie relation, to the scale of the extra dimensions. If there were an increase in this scale over time, then we should observe, for example, that the ratio of the classical electron radius to the Bohr radius was increasing over time. Since this ratio is known to about one part in $10^9$, I would imagine that we would have detected a change in it when the universe expanded by one part in $10^9$. That would have only taken about 10 years.

Not the answer you're looking for? Browse other questions tagged string-theory space-expansion cosmological-inflation compactification or ask your own question.

35
Can the Hubble constant be measured locally?
5
How can contracting dimensions lead to cosmological inflation?
2
Can decompactification explain the inflation of the early universe?