Sealed container with water with air bubble at the top — Basic hydrostatic principles fail? What is the pressure distribution?

From hydrostatics, it is said that when you have a liquid with no moving parts, the pressure does not vary on any horizontal slice of the liquid. The pressure only varies with depth.

Thinking about this led me to consider the following scenario that might contradict this.

Suppose I have water in a fully sealed and fully rigid container. We say it is located on Earth, so gravity is present as usual. Now suppose there is a small air bubble at the top of the container, as shown in the sketch below. 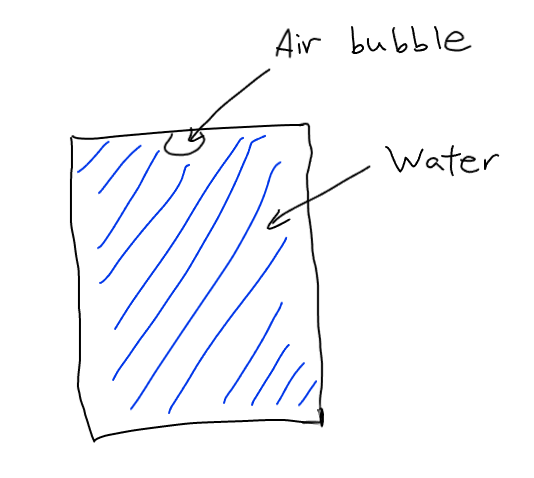 To a good approximation, the air bubble has a uniform pressure $P_{\text{Air}} = \text{const}$ everywhere inside the air bubble. The water presumably has a linear pressure gradient downward: $$ P(z) = \gamma z $$ where $z$ is the distance from the top of the container to the given level and $\gamma$ is the specific weight of the water. Maybe more accurately, the air bubble causes the water at the top to have some pressure as well, so maybe we should write $$ P(z) = P_{0} + \gamma z. $$ Let's say for the sake of the questions, the air bubble is $h = 3\text{ mm}$ in height.

Now the problem is that there seems to be a contradiction between the following three ideas:

All three of these can't be correct simultaneously. Which one(s) is/are wrong?

What I really wonder is, what is the pressure distribution $P = P(x, y, z)$ throughout the whole container, and how can you derive this from first principles? I am really curious to know if there is anything out there that deals with these kinds of scenarios.

There is a contradiction between those three ideas mainly because point 1. is wrong: pressure is not continuous across the air-water interface because of the surface tension.

Point 2. and point 3. are ok. In a continuous domain (water and air inspected independently) of a fluid at rest, Stevino's law holds, i.e.

with $z$ pointing downward. This formula readily describes the linearly increasing pressure in water (remember to use water density $\rho_{H_{2}O}$). For the air bubble, you can assume that the pressure is approximately uniform, if $\rho_{air}$ is small if compared with $\rho_{H_{2}O}$ (usually it is about $1/1000$), and anyway the small size of the bubble leads to a small difference of the $z$-coordinate in the air bubble.

The interface surface behaves as a membrane, and the pressure jump across it, at each point of the surface $\mathbf{r}_s$, can be described with Young-Laplace formula

where $H = \frac{1}{2}\left(\frac{1}{R_1} + \frac{1}{R_2}\right)$ is the average curvature of the surface, and $\gamma$ is the surface tension. The angle of contact between air, water and the solid walls of the container is typically a property of the combinations of the three materials, independent from the pressure.

We can find an approximate solution, assuming:

0
Pressure rating on a container underwater with hole and partly filled with air
1
How do I determine the amount of water in a sealed container to create a given pressure?
0
Pressure at the outlet of a container full of water
4
Concept of surface tension: excess pressure inside an air bubble in a tank of water
1
How to calculate the pressure of a trapped, bubble of air 1m below water surface
2
"Outrunning pressure": Liquid in free-fall