Would connecting p-type and n-type semiconductors work as a diode?

If we placed p-type and n-type semiconductors close enough to be touching (see fig. 1), would this arrangement work as a diode? Please explain. 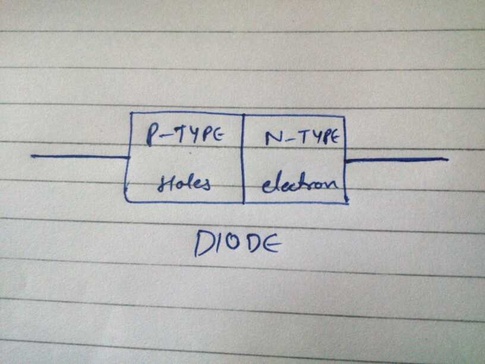 The main reason that a pn junction can behave as a one-directional device is it's built-in potential. Upon formation of the pn junction (In a processas I said above), sharp gradients of carrier densities across the junction result in a high current of electrons and holes and these carriers leave ionized atoms as they cross and a depletion region is formed. An electric field will result from these charges that causes a built-in potential across the junction. You can find more explanation about how a diode works in this question.

If you put a p-type semiconductor in contact with a n-type the above processes can't happen.

No! Any slab, however flat, will have roughness much larger than the inter-atomic crystal spacing and hence continuous contact at the atomic level will not be possible. The junction will behave as a discontinuity for the flowing charge carriers.

On adding precisely a small quantity of pentavelent impurity, in a thin p-type semiconductor wafer, part of the p-Si wafer can be converted into n-Si.The wafer now contains p-region and n-region and a metallurgical junction between p-, and n-region.

Yes, it is in principle possible to make a diode in the way you describe. After all, if you cut a silicon crystal in half, $p$-dope one half and $n$-dope the other half, then rejoin the two halves you have in effect the same end result as making the diode by doping a single crystal. Whether it's possible in practice is another matter.

However if you join different semiconductors, e.g. silicon and gallium arsenide, I'm not sure what would happen as I don't know how the band structures compare.

A Schottky diode is made by joining metal (unlike a contact diode this is an inert metal) onto a semiconductor. The old Cat's Whisker type diode used in crystal sets is of this type.

The practical answer to what you are proposing, is that it would not act as a diode. This is primarily due to contact surface area contamination and irregularity. However, if you can make the contact surface area clean, perfectly flat, and heat up the parts to an appropriate temperature (all done in a vacuum), then it might be possible.
Keep in mind that using the "standard" method of making diodes would be a lot cheaper that using this alternative method.

Not the answer you're looking for? Browse other questions tagged semiconductor-physics electronics electrical-engineering or ask your own question.

0
N-type semiconductors and the number of holes?
1
Resistance of a diode in different regime and the physics of recombination current
0
Internal resistor in a diode
1
Why do the free electrons in N-type want to diffuse?
2
How is a semiconductor electrically neutral?
1
Would selenium act as a p-type dopant for gallium?
1
Fermi level and chemical potential in doped and pure semiconductors