“windows of order” in the Bifurcation diagram

When looking at the bifurcation diagram of a chaotic system, one observes "windows of order", namely short intervals where the system briefly leaves its chaotic state and then rapidly returns to chaos. These intervals are quite periodical. Does anyone have a good explanation for this?

I'm following Steven H. Strogatz's explanation in his book Nonlinear Dynamics and Chaos throughout this answer. Great book, worth a read. See also the detailed explanation on the wolfram website.

Let's use the logistic map $x_{n+1} = rx_n(1-x_n)$ as an example. Its bifurcation diagram looks like this (courtesy of wikipedia): 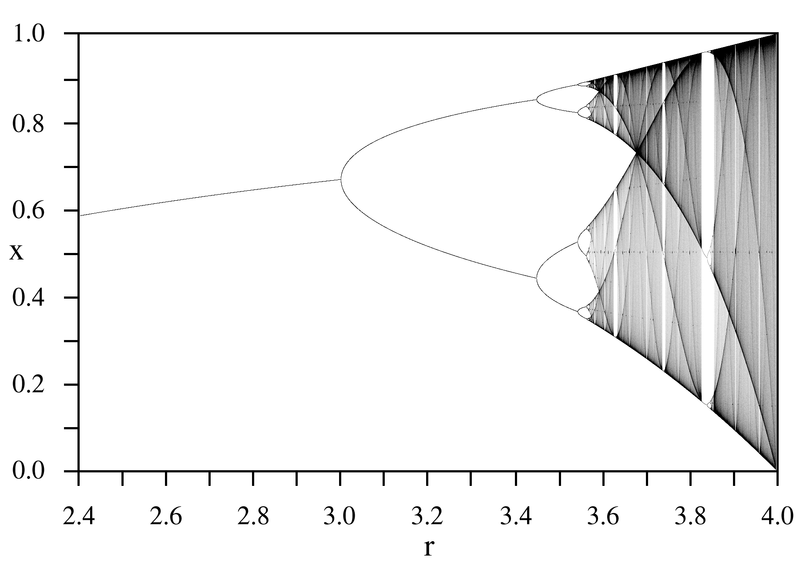 The easiest window to consider is the period-3 window near $r=3.83$ where, out of the chaos, a stable 3-cycle appears. The mechanism responsible for the appearance of this window is the same for all the other windows, so we can simply look at this easy one to understand them all.

A 3-cycle, by its definition, comes back to any point $p$ after 3 iterates. So these points satisfy $p=f^3(p)$ trivially, hence they are fixed points for the third-iterate map. Now, this third-iterate map is an eighth degree polynomial so we cannot find its fixed points analytically, but a graphical representation is a clearer way to show what is going on anyway. The figure below shows the graph of the third-iterate map for an $r$ value in the period-3 window, along with the graph of $y=x$. The points where the two graphs intersect then are the solutions to $f^3(x^*)=x^*$ we are looking for. 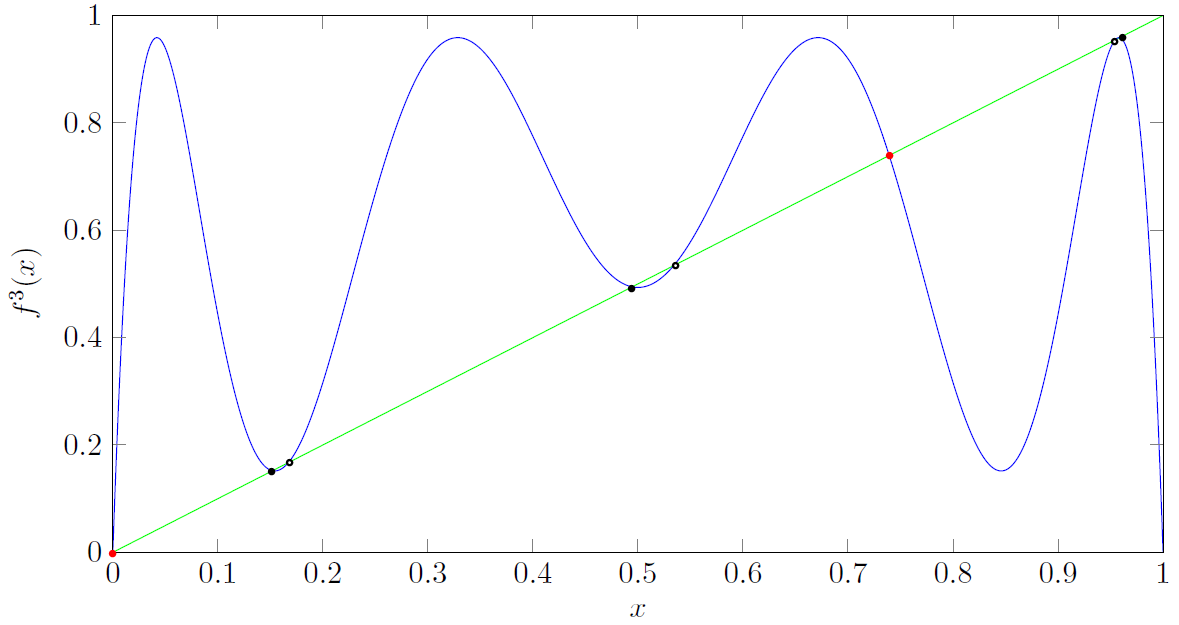 Now suppose we decrease the parameter $r$ (the chaotic regime is at $r<3.8284...$). This will cause the peaks in the graph of $f^3$ to move down and the valleys to rise up. The closer to the chaotic regime we get, the closer the diagonal line will become to intersecting $f^3$ tangentially in three points. Lowering $r$ just a tiny bit more will result in no more intersection of the diagonal, except for the red dots. This is obviously a bifurcation, specifically a tangent bifurcation. This is where the period-3 window is born.

Interesting note: Myrberg showed in 1958 that the point at which this bifurcation happens can be derived analytically to be $r = 1+\sqrt{8} \approx 3.8284$.

The way back into chaos is through period doubling: a flip bifurcation takes place when $r$ surpasses a certain value $r_2$ (say the 3-cycle is born at $r_1$) and the attractor changes from a 3-cycle to a 6-cycle. For some higher $r=r_3$ another flip bifurcation takes place and so on and so forth. The bifurcations happen increasingly faster, converging to a certain value $r_{\infty}$. For $r > r_{\infty}$ the attractor changes from a finite to an infinite set of points and the behaviour of the map becomes chaotic. This is the same mechanism through which the logistic map becomes chaotic in the first place.

Not the answer you're looking for? Browse other questions tagged chaos-theory fractals or ask your own question.

3
Bifurcation of convection of fluid in container, when adding temperature
6
What is a physical example of a Saddle-Node Bifurcation?
12
Calculate/Estimate the fractal dimention of the logistic map
1
Does big bang have really any justification while we are living within a huge chaos?
5
Do all equillibrium points of a discrete mapping show up on the bifurcation diagram?
1
Is the double pendulum an example of a strange attractor?
1
If $f(\cdot)$ is a chaotic map, then is $f^{-1}(\cdot)$ known as the inverse map which is chaotic?
1
Issue with Bifurcation Plot for Driven Pendulum