Are the velocities of a falling rolling coin/wheel parallel?

Can someone confirm that a rolling coin that is falling will, at any instant, only have horizontal velocity directions that are parallel (those velocities being horizontal component velocities)?

It is counterintuitive because the coin will continually turn and travel a curved path, thus we would think that there is a vertical axis rotation with velocities of different directions tangent to a circle of an instant turn center. But I only see one direction horizontal component velocities of every part of the coin at any instant. 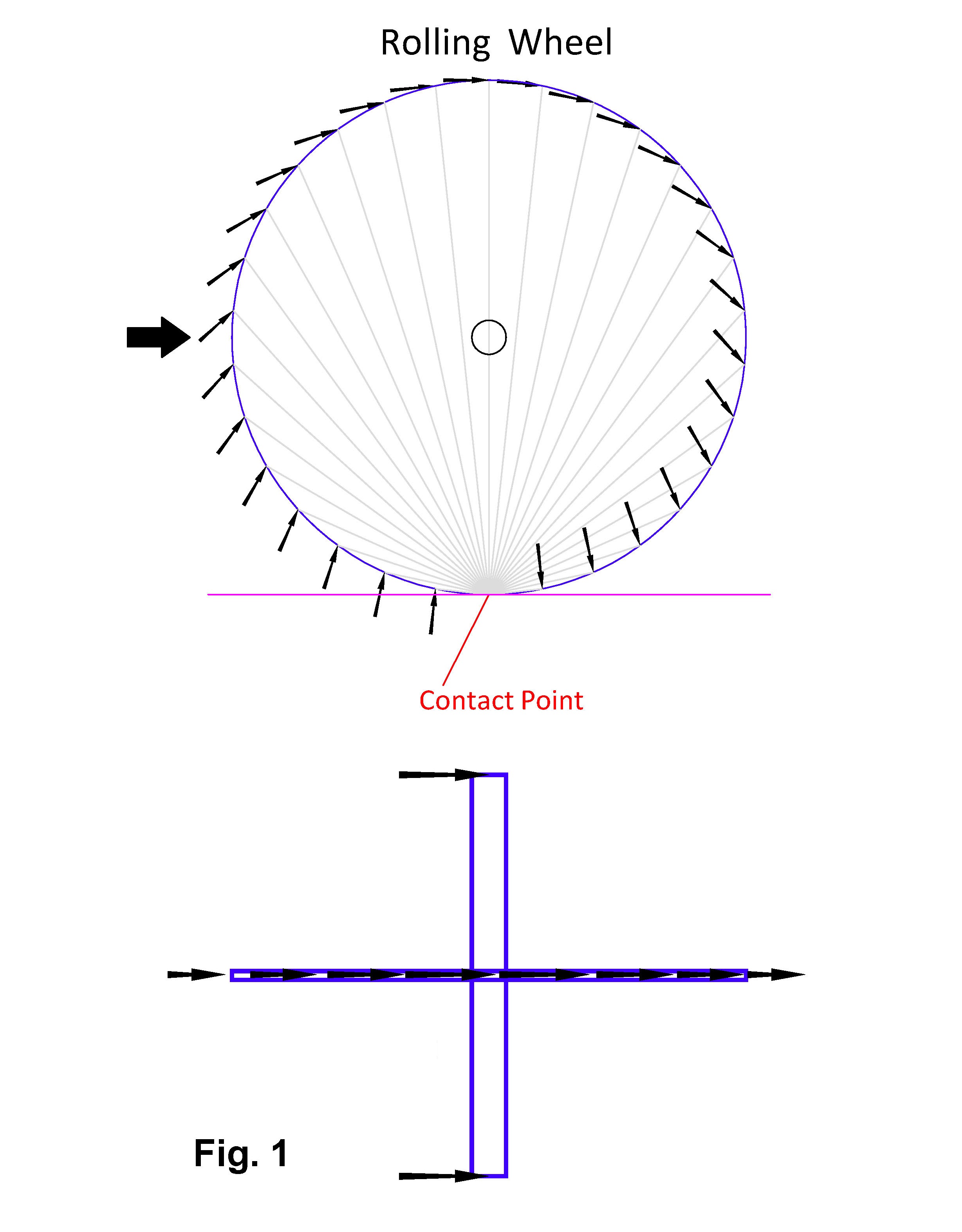 If we combine the rolling and falling motion we get what we’ll call tumbling of the wheel. The tumbling wheel also has same direction horizontal component velocities at any instant. Figs 2 and 3 show this tumbling wheel as it travels along a straight path. 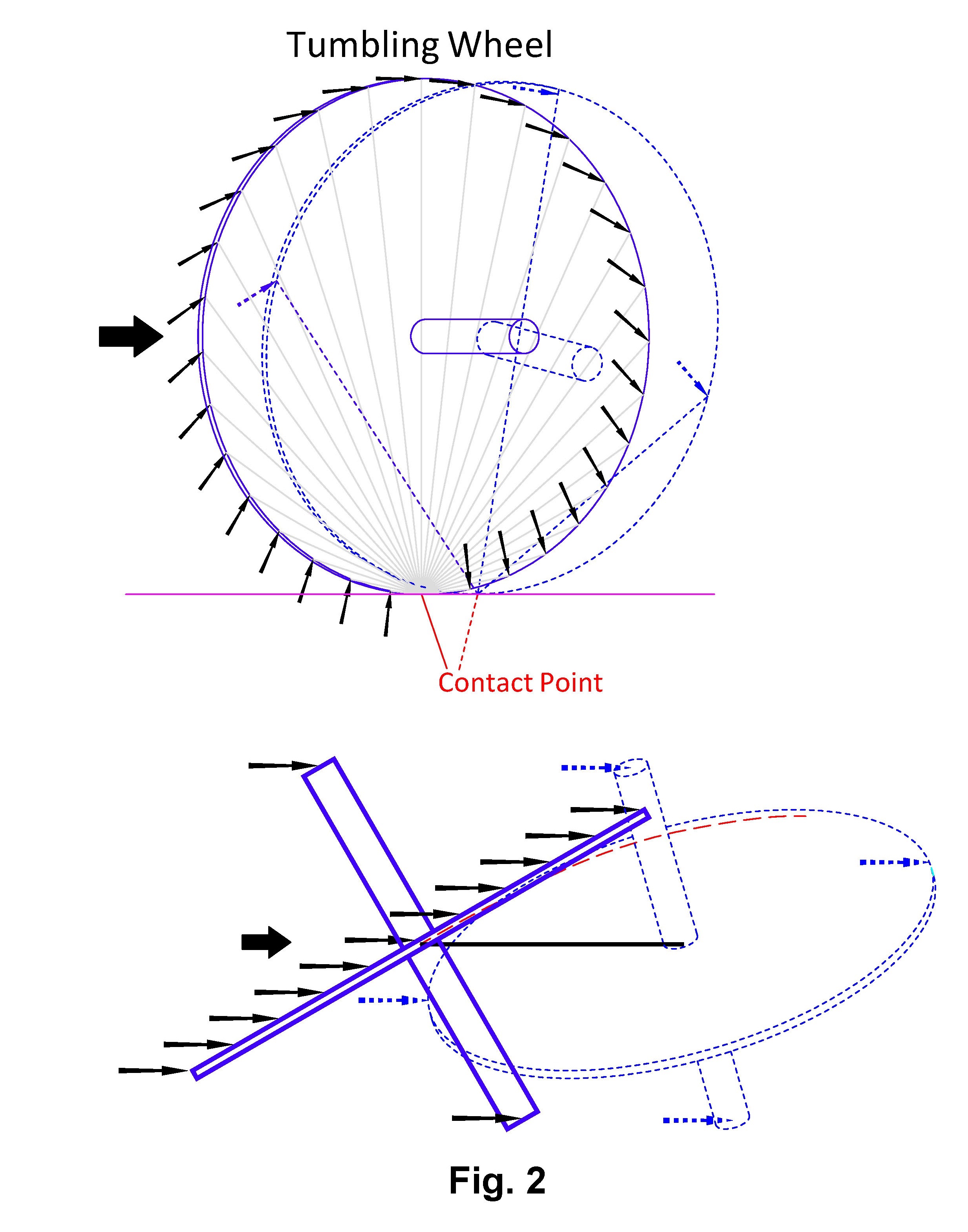 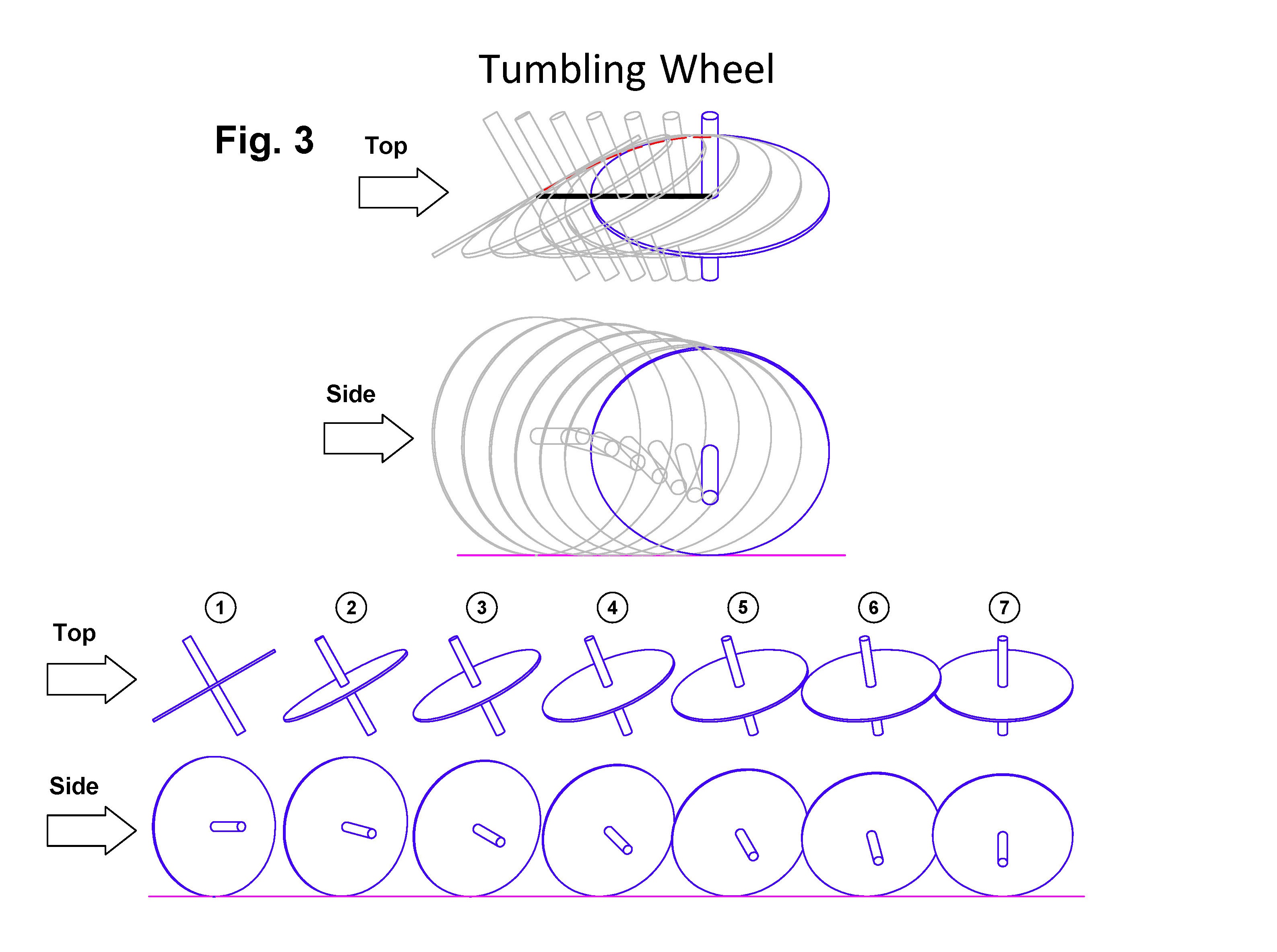 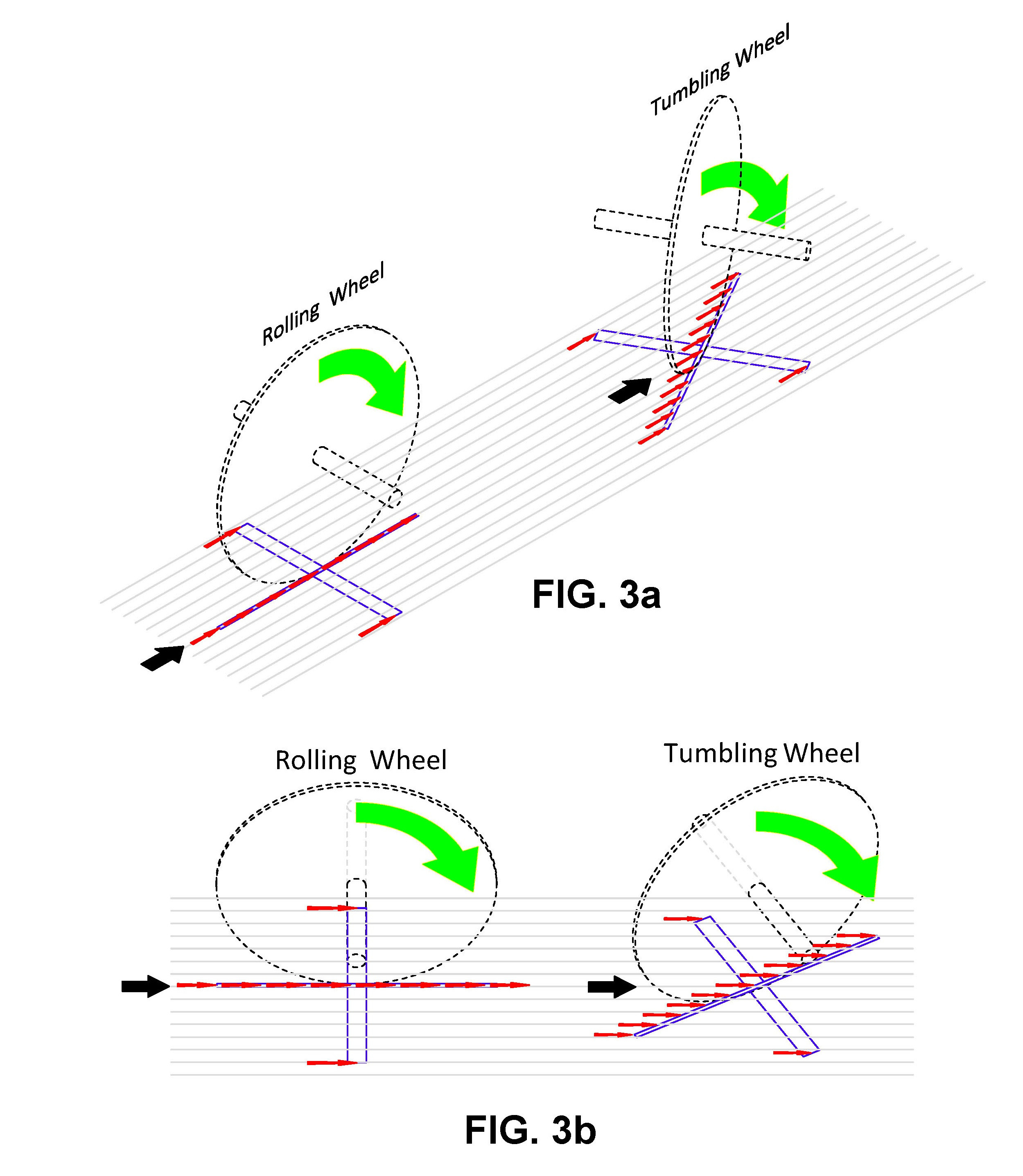 A better illustration of true rolling and falling motion of a wheel is shown in Fig 4. The wheel rolls and falls thus the velocity direction of the wheel center of mass is always at an angle to the wheel plane. Again, all directions of the non-zero horizontal component velocities on the rolling surface plane are parallel, at any instant. 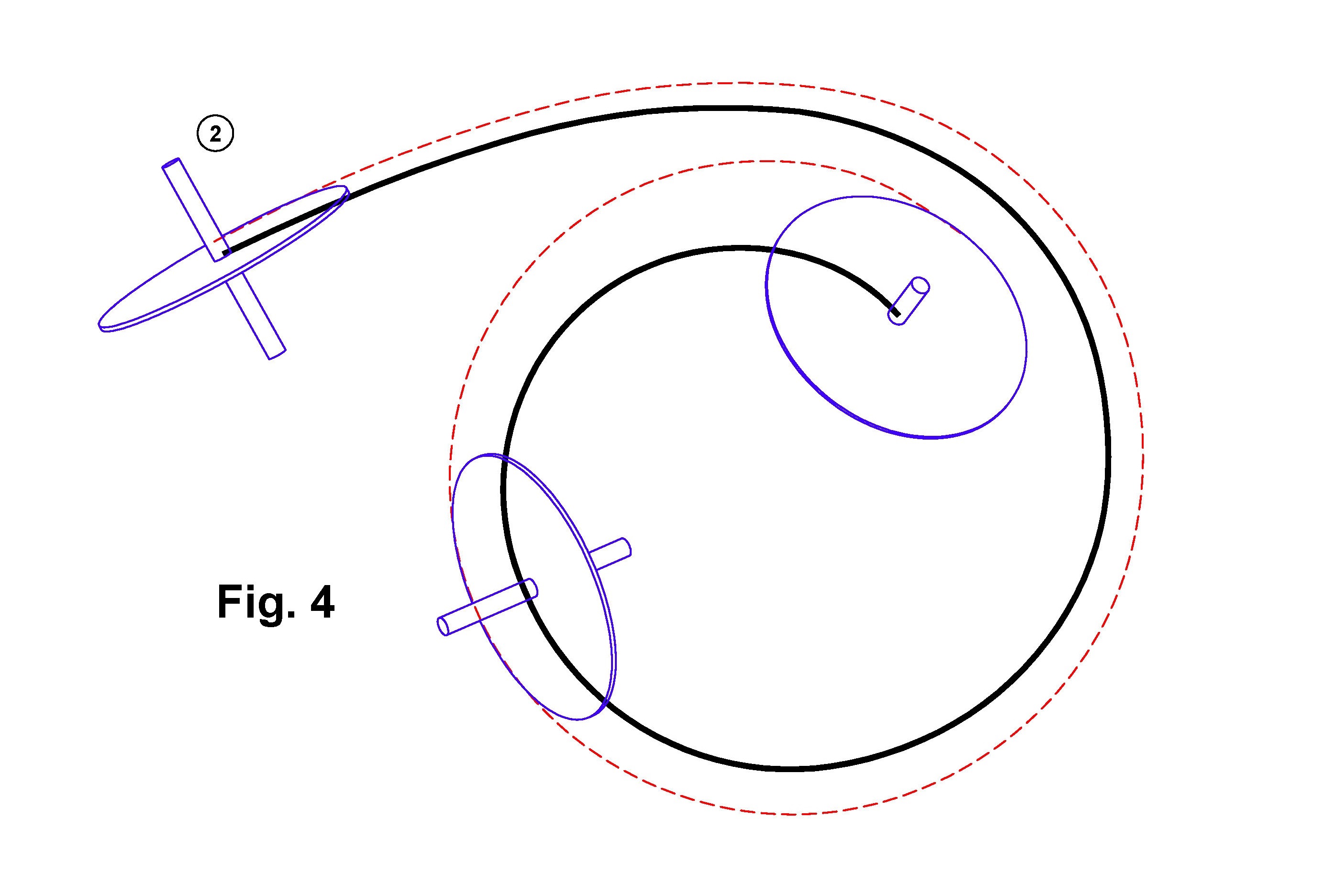 In Fig 5, a cornering vehicle wheel has horizontal component velocities of different directions on the horizontal rolling surface plane. The velocity directions are always tangent to an instant turn center circle. A vehicle wheel changes direction by a different mechanical reason compared to the rolling falling wheel. 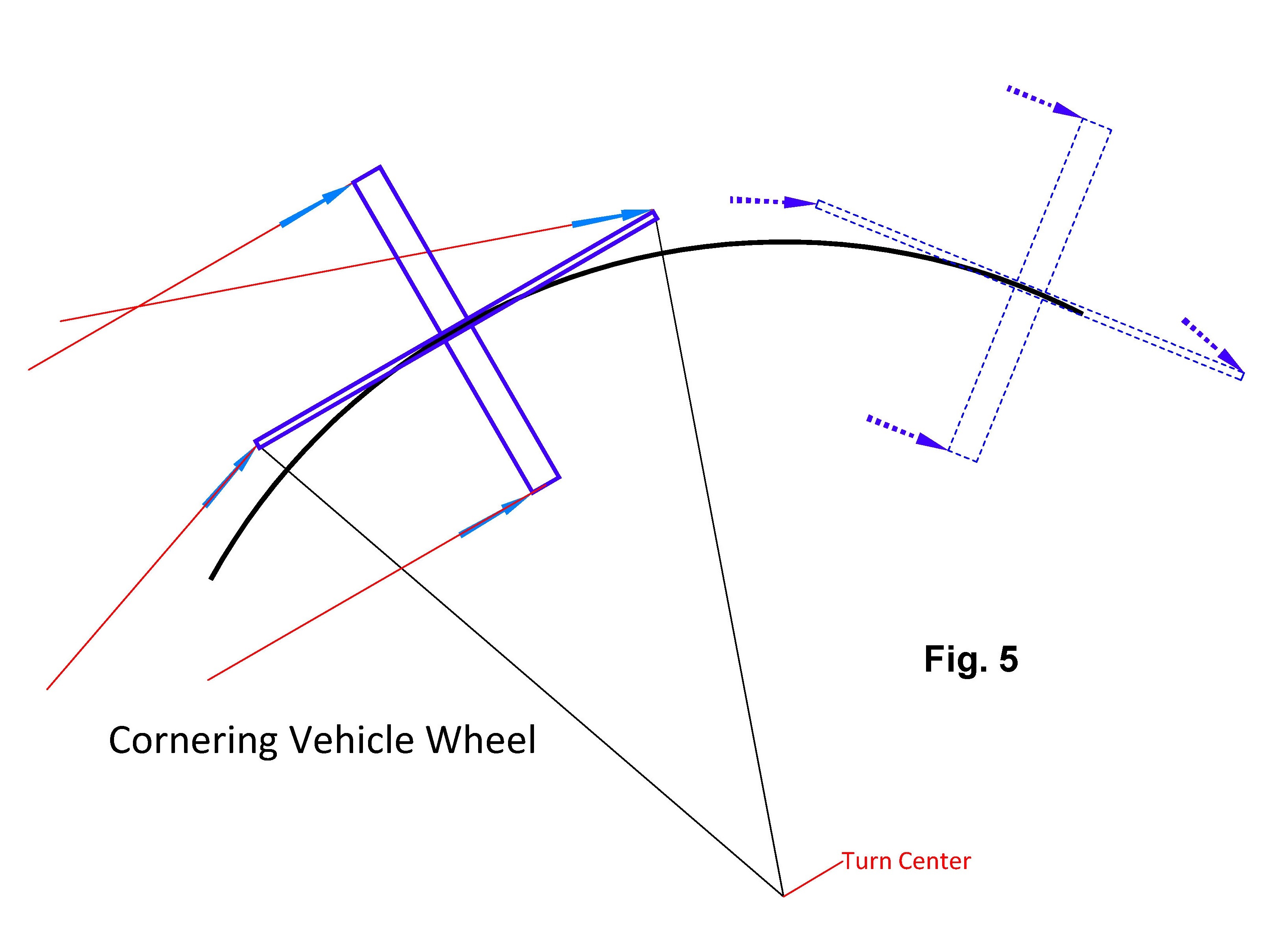 A wheel that is tipped, tipping and rolling does have, at every instant in time, this feature: All of the velocities of all of the points on the wheel, are in a common plane. This is a feature of any rigid object on which there is a point, for a wheel this is the ground contact point, with zero velocity. What plane is this? It's the plane orthogonal to the instantaneous axis of rotation.

Given that there is a point with zero velocity, a rigid object always has an axis through that point which has the property that all of the velocities of points on the object are in the plane orthogonal to that axis.

If that axis is on the ground plane, say the xy plane. Then the projection of all of the velocity vectors on to the xy plane are parallel.

Is this what you are trying to say?

If, however, the angular velocity vector of the wheel has a vertical component, then the velocities (all of which are on the plane perpendicular to the axis) do not all project to a common direction on the xy plane.

Superficially, it seems like you are saying that the angular velocity of a rolling wheel never has a vertical component, which is a false statement.

It is true, however, that one can accomplish a net rotation about the z axis by only rotating about the x and y axis. But there is no reason to think that this is how a rolling wheel turns.

If you think the physics somehow makes it so that the angular velocity vector never has a vertical component, you are wrong. One can set a rolling wheel going with initial conditions corresponding to angular velocity about any axis.

11
The direction of frictional force in smooth rolling motion
2
instantaneous velocity center
0
Speed of a rolling wheel confusion
4
What is the exact role of friction in rolling without slipping?
0
What is torque, really? and can it be determined for a point on a circle that is away from the center of the rotation axis by a radius $r$?
0
Does a cornering wheel turn (change the direction it travels) at its contact point or some other location?