Ask Question
Asked 7 days ago
Modified 7 days ago
Viewed 22 times
0
$\begingroup$
Homework-like questions and check-my-work questions are considered off-topic here, particularly when asking about specific computations instead of underlying physics concepts. Homework questions can be on-topic when they are useful to a broader audience. Note that answers to homework questions with complete solutions may be deleted! 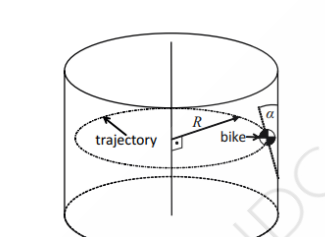 If the bike is maintaining a horizontal trajectory, what are the forces on it? The solution o this shows weight and a force labelled N at the angle a to the wall. I don't understand that because if N is the normal contact force, it should be perpendicular to the wall. Any help would be appreciated

I don't understand that because if N is the normal contact force, it should be perpendicular to the wall

2
Normal force for a bike on an incline
1
Centripetal force equals weight in horizontal circular motion?
0
Finding the free body force diagram of this diagram
1
Static equilibrium - Ladder against a wall, how far can person ascend
7
Force required to move bar at one end
3
How is normal force in circular motion?
0
Change in momentum for gas particle collision with wall
5
Why is the normal contact force horizontal on an inclined ladder?
0
Force: action and reaction
1
Why does Friction not accelerate the body in this case?