On the definition of ray (optics) and wavefront of light

Wikipedia defines a ray as "[...] a curve that is perpendicular to the wavefronts of the actual light, and that points in the direction of energy flow". But the usual meaning of a ray in lower classes and in daily life is "any of the lines of light that appear to radiate from a bright object" (from MW). What is the relation between these two meanings?

The red line is a ray in the second sense, is it also in the first sense? If so, how does the wavefront, to which it is perpendicular, look? 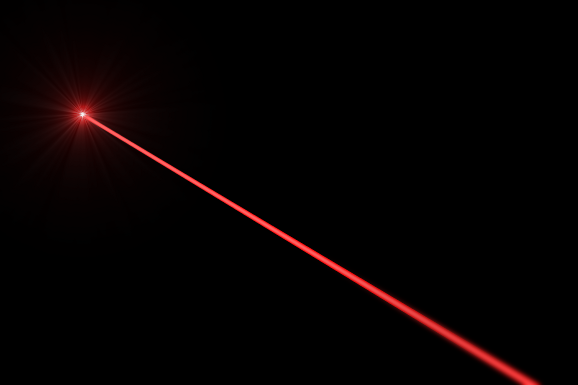 The laws of reflection and refraction including Snell's law were, I think, discovered for ray with the later meaning. Are both definitions equivalent?

Geometric optics defines a light ray, roughly speaking and using modern terms, as the trajectory of a photon as a pure particle, which would be your second definition.

Wave optics has to come up with a different definition, since there's no "particle" photon in this model. A wave has a wave front, and usually its Poynting vector (energy flow) is perpendicular to this wave front.

The bridge between the two theories is that a light ray is defined as a line perpendicular to the wave front. That's your first definition.

It simply means that two theories that model light in different ways have to come up with different, internally consistent, definitions for an experimentally visible phenomenum (a light beam).

Edit: forgot the end of your question. The laser beam being approximately cylinder-shape, the wave front is perpendicular to it, so it must be a plane. In other words, it's a plane wave.

What is the relation between these two meanings?

For light these two definitions of light rays

are almost equivalent (see at the end of this answer why "almost").

If so, how does the wavefront, to which it is perpendicular, look?

In your example of a very narrow light beam the rays and waves look like this. 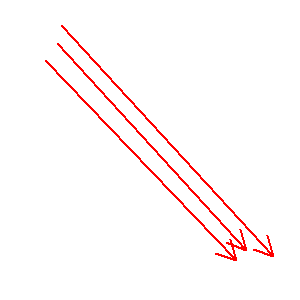 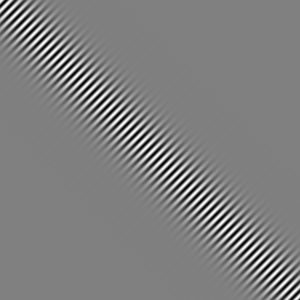 The laws of reflection and refraction including Snell's law were, I think, discovered for ray with the later meaning. Are both definitions equivalent?

The reflection and refraction laws were originally discovered and explained with the first definition (rays = lines of light radiating from a bright object) in mind. However, later these laws could also be explained by using the second definition (rays = curves perpendicular to the wavefronts). Both models of light (rays and waves) are almost equivalent, only if the wavelength is much smaller than the involved geometrical sizes (like the width of the light beam, and the sizes of the objects the light is shining on).

The wavelength of light is indeed very small (between $0.0004$ mm and $0.0007$ mm, depending on the color of the light). Therefore, in every-day life it is usually fine to imagine light as rays instead of as waves. But when you do experiments with light and very small objects, then you get light diffraction. You can understand this diffraction only by imagining light as waves. The ray model is not sufficient for this.

What is the relation between these two meanings?
Essential they are the same. 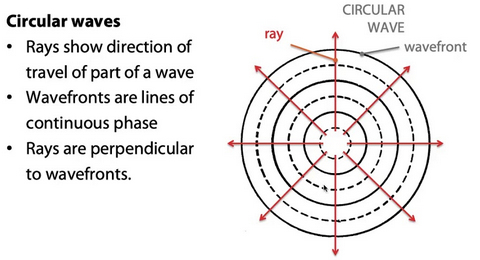 In theory a (mathematical) ray has zero thickness but in practice this cannot be achieved. 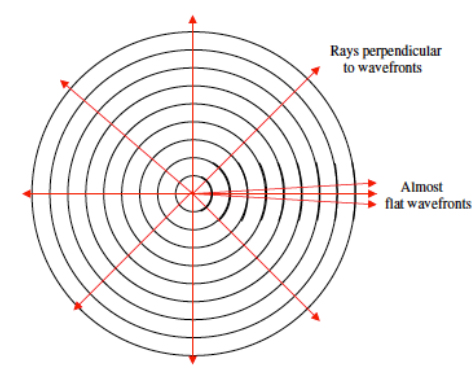 In the diagram if the wavefronts are restricted, eg using a hole in a piece of paper, as shown above delimited by the three rays on the right of the diagram you have a "ray" using a point source. The approximation to a theoretical ray gets better as the angular separation of the rays in the diagram decreases.

The red line is a ray in the second sense, is it also in the first sense?
Yes as that is the direction of the flow of energy.
The photograph you have shown to illustrate a series of almost parallel rays which are produced by a laser with the wavefronts at right angles to the beam and are an example of so called plane wave(front)s.

If so, how does the wavefront, to which it is perpendicular, look?
As shown above with just the wavefronts defined the rays directed to the right but with the angular separation between the rays being very small.
Thus the wavefronts are essentially parallel to one another.

Not the answer you're looking for? Browse other questions tagged electromagnetism optics waves geometric-optics or ask your own question.

3
Didn't Newton's Corpuscular theory fail to explain reflection?
7
Is reflection and refraction the same thing - bouncing of light?
0
Doubt in derivation of Snell's law using Huygen's principle
0
Can a light wave front narrow or widen in refraction, and what does this really mean for light?
0
No solution to Bragg's law?
1
How do I compute a Mueller matrix for a refracted ray?
0
What happens in Young's double slit experiment and Fraunhoffer's diffraction actually?
1
How to find the index of refraction of a glass cube with limited information?